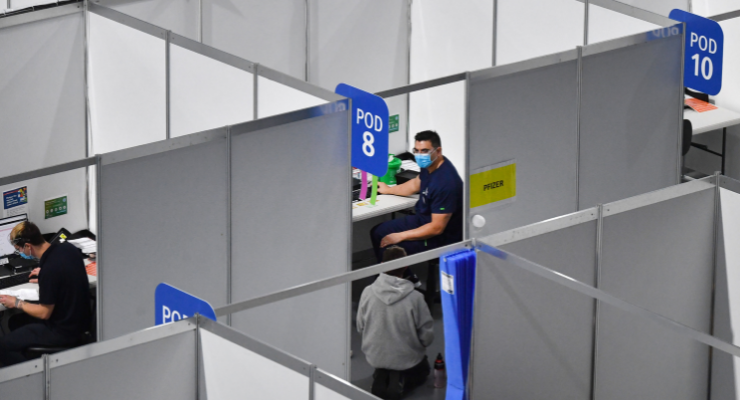 October will reportedly see a shortfall of Pfizer vaccines, Guardian Australia says national cabinet was told, from 10.9 million doses in September to 8.4 million in October. October is a critical month for NSW and Victoria, who are expected to reach 70% double-dose coverage next month, as ABC says. The government claims they will prop up the shortfall with Moderna and UK-originated Pfizer doses, but questions remain about when exactly that patch-up will happen, as leaders have been reportedly warned a 2.45 million reduction in “allocated supply” will affect every state and territory.

Leaders have been squabbling about the supply shortage all week after Victorian Premier Dan Andrews revealed on Monday that vaccine taskforce head John Frewen had advised states of a “problem” with Pfizer supplies in October while he urged his state not to delay their jab. Andrews continued yesterday that anyone who is worried about the availability of vaccines should speak to the federal health minister, as Sky News reports. When asked about Andrews’ comments yesterday, Health Minister Greg Hunt told reporters, “I could say something, but I won’t”, continuing that there was no reason for the states and territories to be worried as the problem was supposedly “resolved”.

South Australia’s corruption watchdog just had her powers slashed in sweeping legislative changes passed yesterday, The Advertiser ($) reports. Now SA’s Independent Commissioner Against Corruption (ICAC), Ann Vanstone, can only investigate corruption and not misconduct or maladministration. So what does it mean? Vanstone says politicians suddenly face much less scrutiny from the watchdog, and the parts of her job dedicated to prevention and education will likely disappear. Indeed Vanstone indicated to ABC she might quit her post if this happened, asking “what’s the point of the ICAC” then?

The unanimous legislation was dedicated to a former police officer Doug Barr, who took his own life while awaiting the result of an ICAC investigation that ultimately cleared him. It also comes in the wake of a SA government scandal that saw a mass data harvest of website visitors via at least 100 government website links, as ABC reported. The bill has been slammed as a massive conflict of interest — Former Liberal turned independent Troy Bell and Liberal Fraser Ellis both face charges following ICAC investigations, and yet both MPs voted to pass the legislation limiting its power.

THE COAL TRUTH, AND NOTHING BUT THE TRUTH

NSW will shut down coal-fired power in the next two decades, The Australian ($) reports. It comes as Energy Australia confirmed they’d bring the closure of their Mt Piper station forward by two years to 2040, though chief executive Mark Collette told the Oz that date could come forward again. Indeed the AFR says the Mt Piper station will be running at a loss by 2025 if electricity prices stay the same.

It comes as Australia’s reliance on wind, solar, and hydropower reached a record high of 60.1% this week, ABC reports. Overnight in the US the Democratic House Speaker Nancy Pelosi said Australia is “leading the way” on climate because we are “meeting and beating” the Paris Accords, but it’s unclear whether she knows our target is a 26-28% reduction from 2005 levels, something the Biden administration described as “insufficient” in April, as the SMH reports.

Federal Treasurer Josh Frydenberg is going pretty hard on net zero this morning, as the AFR reports. He’s set to give his strongest endorsement to date on net zero by 2050 in a speech to a peak industry group today. He’ll say that if we don’t commit to the target, we’ll suffer debilitating international capital market sanctions, impacting everything from “interest rates on home loans and small business loans, to the financial viability of large-scale infrastructure projects”.

I don’t think it’s much of a stretch to say: little humbles you quite as much as renting. Let’s face it, most real estate agents serve one god — the landlord, and offer you, the tenant, one single thing — a test of your capacity for total misery. So when Guardian Australia’s Brigid Delaney was “love-bombed” by a mononymous agent known only as Denise, it came as a bit of a shock. Delaney says she had jotted her name down for several properties in the weeks prior to the fateful night that Denise called.

She told Denise she was no longer interested, but the agent did not let up. “No! You must look at this! You are very special, I can tell. I know the owner, he would love you!” Denise told her. Several attempts to get out of the inspection fell on deaf ears. It’s not a Hollywood ending — Delaney said the property was “essentially a cave” and didn’t take it. But it did make her marvel: “I’d seen some weird real estate tactics but they were mostly of the negging variety,” Delaney says. She ended up taking another flat with another agency, but as she laid awake this week listening to a metronomic drip-drip-drip in her place, she admits she felt some regret about dear bright-eyed Denise.

Hope your weekend includes a little blind optimism, too.

That is my view and George [Christensen] knows my view. One of the things we love about this nation is you have the freedom to say what you like, even if what you say is wrong.

The Nationals leader says a person has the right to say wrong things — even elected politicians who can influence hundreds of thousands of people with their blatant misinformation, it seems. It comes after Christensen — who attended Mackay’s anti-vaccination rally — called Victorian cops “thugs” for their treatment of Melbourne protesters, some of whom were anti-vaxxers and alt-right activists.

Keating zeroes in on the incoherence at the heart of AUKUS, but can Labor do better?

“Casting China’s actions in the South China Sea as merely ‘unwise’, as Keating did, seems an understatement of extraordinary magnitude. And belting Penny Wong for her complicity with the Coalition on portraying China as a threat is wholly unfair given her repeated criticisms of the government for whipping up fear of China for domestic political gain — and being accused, in effect, of treason by News Corp for doing so.

“But Keating makes some unanswerable points: it is the US that invades other countries (with Australia dutifully carrying its spears as it does so), not China. And, most particularly, ‘so poisonous are the Liberals towards China they are prepared for Australia to lose its way in the neighbourhood of Asia, in search of Australia’s security from Asia, by submission to yet another strategic guarantor’.”

“The group’s assets rocketed from $91 million to $171 million. Even without the property sale, Burnet’s operating cashflow rose from $3.8 million to $13.4 million. This growth was far higher than the $100 billion glamour stock Atlassian. Its magnificent financial performance, however, didn’t stop the not-for-profit from claiming JobKeeper from taxpayers. Even without that largesse, Burnet’s cashflow more than doubled (and its surplus was about 20 times higher than 2019).

“If that wasn’t enough, it will now pocket upwards of $200 million from the sale of a majority-owned ‘for profit’ subsidiary. Burnett also received a $2.7 million grant from the Victorian government in 2020 to assist with its COVID response.”

“Mark McGowan swept back into office in WA in a landslide, and he’s now about to make it much harder for the conservative side of politics in the state to maintain its traditional control of the upper house of Parliament. The WA Nationals are up in arms over a proposal to do away with weighted electorates in the Legislative Council, which has blocked previous attempts at electoral reform.

“Under the current system, there is a wide discrepancy in the worth of a vote in the Legislative Council, against which WA Labor has been campaigning for decades in favour of one vote, one value. But the Nationals have described the recommendation by the Ministerial Expert Committee on Electoral Reform as ‘another nail in the coffin for fair representation for regional WA in the state’s Parliament’.”

No virtue in rich nations outsourcing their emissions — Ron Boswell (The Australian) ($): “In recent decades the richest nations have lowered their emissions footprints by outsourcing the production of manufactured goods, mostly to China and other developing countries. And this shift is making some countries look green for no reason other than their companies have relocated their production to other countries. According to UN data, China’s share of global manufacturing output climbed from 8.7% in 2004 to 28.4% in 2018.

“Across the same period, the manufacturing contribution to Britain’s gross domestic product more than halved from 25% to about 11%. Manufacturing in the US also has hollowed out, while in the past decade the EU has become a net importer of emissions-intensive steel. Does this mean the British, US and EU economies have stopped using emissions-intensive goods? Not at all … And under global climate rules the emissions generated producing those goods are counted against the nation that produces them, not the country that consumes them.”

Financial markets are preparing for climate change and so must we — Josh Frydenberg (The SMH): “Australia’s interest lies in our markets functioning effectively so the financial system remains stable, investors are able to make informed and timely decisions, and capital can be accessed at the lowest possible cost … We cannot run the risk that markets falsely assume we are not transitioning in line with the rest of the world. Were we to find ourselves in that position, it would increase the cost of capital and reduce its availability, be it debt or equity …

“There is a message here for business: opportunities will abound and it will be those businesses that recognise these trends and put plans in place to adapt that will have the most promising futures. At the same time, there is a message to Australian banks, super funds and insurers. If you support the objective of net zero, do not walk away from the very sectors of our economy that will need investment to successfully transition. Climate change and its impacts are not going away. It represents a structural and systemic shift in our financial system, which will only gain pace over time.”

And now you get more from your membership than ever before.