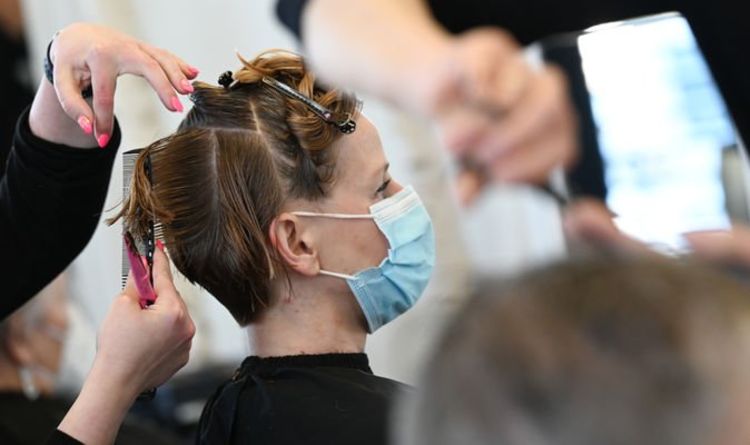 Gemma, a client at a hairdresser in the UK had used the same hair dye for 10 years, however she experienced side effects after recovering from Covid-19. Gemma, who suffered from coronavirus in January, told the BBC: “The reaction is so severe.

“My whole scalp, my face – I just can’t even imagine what would have happened to me.”

Patch tests require clients to sample the product on their skin 24-48 hours before their hair appointment to see if there are any reactions.

Gemma spoke about the patch test her hairdresser had put in place, she said: “I thought it was a bit of a faff having to come into the salon and wait 48 hours when all I wanted to do was get my hair coloured.

“However, thank goodness that she [Gemma’s hairdresser] had put the [patch test] policy in place.

“I had the patch test. The following day, I felt a really hot burning sensation behind my ear which progressively got worse to the point where it had taken layers of my skin from behind my ear.”

The hair salon has confirmed seeing four other similar instances.

Stacey told the BBC: “I was picking up and seeing a lot of reports from stylists and salon owners saying that people were having these new reactions that weren’t having them before, so it really alerted me that something is going on here.

“I started thinking, ‘what is the link here?’”

However, Dr David Basketter, consultant toxicologist at DABMEB Consultancy Ltd, told The Telegraph: “Permanent hair dyes are a real allergy risk and awareness of this is rising, such that upon return to salons there is a greater chance that they will insist on an allergy test prior to dyeing.

“Thus, without the need to invoke Covid’s impact on the immune system, one might expect to see a greater number of hair dye reactions, which does not mean that there isn’t a Covid effect as well.”

Richard Lambert, chief executive of the NHBF, said: “An allergic reaction can occur at any time due to a number of factors of which a compromised immune system is one.”

The NHBF previously suggested reactions could arise because of heightened sensitivity as people had not dyed their hair during lockdown.