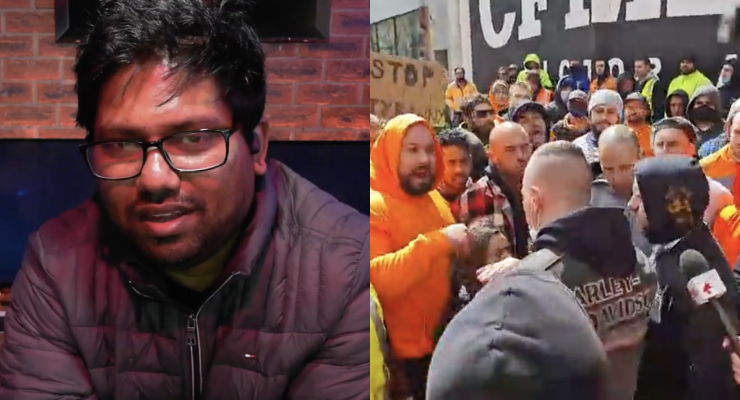 When hundreds of protesters took over Melbourne’s West Gate Bridge on Tuesday, the Real Rukshan was there to capture it.

With 60,000 people concurrently viewing his livestream, Real Rukshan — the online nom de plume of Rukshan Fernando — was recognised by a man dressed in hi-vis: “Rukshan,” he yelled over the chaos, “you’re the reason we came down.” Later the crowd cheered his name while members of online conspiracy Telegram channels nominated him as leader of the movement.

Fernando is one of a number of Australian content creators such as Avi Yemini and Morgan C Jonas who position themselves as independent journalists documenting the “freedom” movements opposing lockdowns and vaccines.

Fernando’s live streams have functioned as the connective tissue for Melbourne protests and the broader movement, with millions of people watching from his perspective. His content and commentary take an anti-media and anti-government slant while lending credibility to fringe views. In communities that despise the mainstream media, he’s venerated by those who say he’s showing the “real truth”.

In a decentralised, disorganised movement, Fernando has emerged as its surprising narrator.

Fernando is a Sri Lankan-Australia who went to school in Dandenong and studied law at Victoria University, according to his LinkedIn profile. For the past decade, he’s run a wedding photography business, Ferndara.

In a March interview about his career with another Australian creator, Fernando says he’s always been political but didn’t show any interest in domestic matters until Victoria’s second lockdown in July 2020: “When you have the government interfere with your life, that really makes you arc up and be more politically attuned to what’s happening around you.”

In posts on Ferndara’s Facebook page, Fernando says lockdowns had affected it “immensely” and it had received little government support.

But tweets from his account from 2019 and early 2020 show a much more partisan Fernando than he lets on in his videos. He’s a steadfast Donald Trump supporter who believes the United States election was stolen. He’s an avid fan of Jack Posobiec, Mike Cernovich, and Andy Ngo, right-wing American creators who have peddled conspiracy theories and platformed white nationalists.

He doesn’t believe that climate change is real. He called Supreme Court Justice Brett Cavanaugh accuser Christine Blasey Ford a “fake victim of nonexistent events”. He promoted a conspiracy theory that US politician Ilhan Omar married her brother. He called Alexander Downer a foreign spy for his involvement in a meeting with George Papadopoulos that led to the US Russiagate investigation. In short, he was fully immersed in the Trump media ecosystem.

Rukshan did not respond to an interview request from Crikey.

He started making public political content only after a video posted to his personal Facebook page about changing advice on mask-wearing went viral.

“I made a video comparing the statements that Brett Sutton and some of the other health ministers made about masks, and I posted it on my personal Facebook page and it ended up with 500,000 views,” he said. (Advice on masks changed as global health authorities found out more about how COVID-19 is transmitted and became less concerned about mask shortages.)

The interest in this material inspired him to repurpose a Facebook page under his real name into a page called the Real Rukshan. In the first video he produced, in August 2020, Fernando spoke of his desire to eschew traditional institutions and mainstream media.

“Do we always take the word of an authority figure?” he asked. “Is there an area where public opinion or our own feelings or our own understanding of an issue is as valid or as important?”

Early on, his videos covered a variety of topics: many were satirical takes targeting Victorian Premier Daniel Andrews and his handling of the (such as a video about a monkey running Victorian government computer modelling), but others took aim at George Floyd and US President Joe Biden. In one, Fernando chalked up the backlash to Trump-promoted, hydroxychloroquine-spruiking Dr Stella Immanuel as “religious bigotry”. He even registered murdochhurtmyfeelings.com in an attempt to respond to anti-News Corp campaigners.

‘No one but the government is to blame’

A theme throughout Rukshan’s videos is his anger at what he perceives as hypocrisy, censorship and overreach from institutions — more so than the specific policies themselves.

Fernando criticised the Melbourne Black Lives Matter (BLM) protests in June 2020: “How about these experts lock up all the protesters for a few weeks,” he tweeted. In a video he explained that this was because police had cracked down anti-lockdown protesters early on in the first lockdown and not on BLM protesters.

However, both protests happened at different stages of lockdown (Victoria’s first strict lockdown versus mostly eased restrictions), vastly different compliance with COVID health measures (BLM protests enforced masks, physical spacing and other mitigation efforts) and ignored that BLM leaders were also fined. Crikey was unable to find any criticism from Rukshan of the anti-lockdown protesters breaching lockdown rules before or after, many of which he’s covered.

Fernando has also changed his views. His early videos supported Victorian lockdowns before becoming increasingly critical of them. He initially supported vaccines — accusing the mainstream media of undermining vaccine support because it was linked to Trump — before flipping to sharing negative coverage of them. In particular he seized on reporting about AstraZeneca blood clots. But still, he stops short of being explicitly anti-vaccine, instead criticising government health measures and law enforcement through a libertarian lens.

Fernando doesn’t share false information like others in the movement. But his coverage myopically focuses on news stories and coverage that play to an anti-vaccine, anti-lockdown audience in misleading ways. This explains how he’s able to evade social media suspensions and bans. Where other creators have retreated to fringe platforms like Telegram, Fernando remains on Facebook, Instagram, YouTube and Twitter. But he speaks paranoidly in his videos about his fear that big tech is censoring those people encouraging vaccine hesitancy.

For example, The Daily Telegraph reported in August that Fernando shared a video of a UK official who mistakenly said that most people admitted to hospital for COVID had received the vaccine. That was later walked back (in fact it was that 60% of people admitted were unvaccinated) but Fernando’s video claiming a “cover-up” went viral and was seen hundreds of thousands of times. He never covered the clarification.

In his year as the Real Rukshan, Fernando’s most popular content has depicted protests — particularly his livestreams. Since July, his Facebook following has jumped from 30,000 to more than 190,000, mostly off the back of livestreams.

He streams for hours, walking with protesters, while tens of thousands watch. His video on Tuesday’s protest was viewed by more than 2 million people.

Australian Strategic Policy Institute analyst Ariel Bogle says there is a tradition of livestreams documenting protests.  One of the world’s most popular political YouTubers, Tim Pool — who Fernando says he admires — pioneered the practice while livestreaming the Occupy Wall Street protests in 2011. But Bogle points out there’s a fine line between documentation and participation.

“Even as they claim to present the so-called ‘ground truth’, they necessarily only show one side of the story,” he said. “More extreme content and confrontation gets more views. Not to mention, people inevitably ‘perform’ for the camera in certain ways.”

Throughout his streams, Fernando has shown his perspective of protests. During a general “freedom” protest last week, Fernando narrated his live stream by repeatedly claiming that all the protesters were being peaceful and that police were instigating violence. Victoria Police say 10 officers were injured, six required hospitalisation, and footage captured by other people show protesters striking and trampling officers.

Likewise, during this week’s protests Fernando’s footage failed to capture the vandalism and violence committed by protesters, instead focusing on the actions of police. When protesters started pelting the CFMMEU office with glass bottles, Fernando chose to turn the camera away.

At many protests, mainstream media organisations haven’t had reporters present. In this vacuum, Rukshan and other similar creators are often the only on-the-ground perspective. As a result, mainstream media frequently uses his footage in their coverage. Watchers of the protests — believers and sceptics alike — use his streams to observe what is happening. Rukshan appeared on 3AW and Fox News as an authoritative voice about the protests this week.

Meanwhile, his streams have acted as a lightning rod for the protests. Institute for Strategic Dialogue researcher and journalist Elise Thomas tells Crikey that only a handful of protesters attended the CFMMEU on Monday morning before Fernando arrived. It took off when he started streaming, drawing more attention to a protest that ultimately turned violent.

Like much of Fernando’s work, his live streams are both true and misleading. It’s true that an increasingly militarised police have responded to protesters with heavy-handed tactics and appear to have committed acts of brutality. It’s true that many protesters have been peaceful. But Fernando’s coverage omits the full story: that an unruly, chaotic group that represents a vocal minority ran amok in a city during a pandemic with no regard to its safety or the safety of others. His videos credulously platform people with fringe and extreme views without interrogation.

Fernando is not alone in this practice. In a 2017 New Yorker profile of Tim Pool, Andrew Marantz critiques the YouTuber’s propensity to platform far-right figures uncritically.

“A journalist’s first task is to gather information without fear or favour,” he wrote. “The next task, which is equally crucial, is to scrutinise the data — to separate the facts from the fulsome bullshit.”

Early on, Fernando spent time documenting anti-vaccine group Reignite Democracy Australia. He appeared on the channel of Tim Wilms, an Australian Proud Boy and far-right content creator. He uncritically interviews people and platforms movements that have shown themselves to be inconsistent or even duplicitous. At one point this week, he interviewed a known member of an Australian neo-Nazi group, but the subject’s extreme views or group membership never came up.

Unlike other creators, Fernando doesn’t appear to make money from his content. He’s posted about refusing donations and hasn’t made any efforts to monetise his online presence. He claims he supports himself with his wedding photograph work.

Fernando is motivated by a desire to spread his perspective. In his first public video he said: “The reason I’m doing it is to share my opinion on social issues, world issues.”

And it’s working. With millions of views on his videos, Fernando’s perspective has been the dominant lens through which this week’s protests have been viewed by people around the world.

“If you look at the statistics, people who are sitting in their kitchen or their office with their camera talking to people,” he said. “They’re getting through to more people than the media ever imagined.”

And now you get more from your membership than ever before.