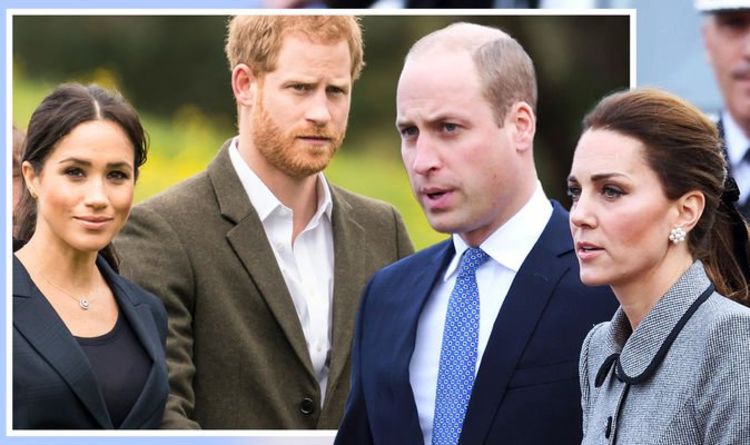 Royal biographer Anna Pasternak analysed Meghan and Harry‘s ongoing first official joint visit to the Big Apple and found it strikingly different from their previous royal tours. The author analysed Meghan’s style, their hosts and even their hotel stay while in New York and said these details could suggest an intention by the Duchess to position herself in the political arena.

Comparing the outfits worn during a royal engagement part of the Sussexes’ first tour in Oceania and those donned during this week’s trip, Ms Pasternak wrote in the Daily Telegraph: “Look at those outfits again.

“They don’t say Princess in Training, as the Bondi beach dress and wedges did, any more.

“The 2021 sartorial statement is: ‘Take me seriously. I am a future player. A future governor.

“‘A future president. The first female president, no less.’

“Is it fantastical that Meghan’s apparent ambition is to hold the highest office in her sight?”

Ms Pasternak also noted Meghan and Harry are staying at the Carlyle hotel, which in the past has famously hosted royalty – including Princess Diana and the Cambridges – as well as American presidents during their working trips.

Delving into an analysis of the high-profile people the Duke and Duchess have met during their first day in New York, Ms Pasternak also claimed: “And the power players paying homage to the non-Royal couple in New York were impressive, including the US ambassador to the UN, Linda Thomas-Greenfield, who said that they had shared an ‘important discussion of Covid, racial justice and raising mental health awareness.’

“Democrats whom Meghan sought out included de Blasio and his writer and activist wife Chirlane McCray, Patricia Harris from Bloomberg Philanthropy, and New York state governor Kathy Hochul, as can be seen in the picture below.”

Ms Pasternak isn’t the first royal commentator to speculate on whether the Duchess of Sussex has political ambitions, also given Meghan and Harry’s brush with US officials and Democrat leaders.

However, Meghan never publicly voiced the intention to step into politics.

During their visit to New York, Meghan and Harry widely advocated for vaccine equity, a cause they will also promote today when they take part in Global Citizens Live on its Central Park stage.

However, Meghan and Harry also held meetings focused on other topics during their New York trip.

Harry also joined his wife at Harlem Elementary School PS 123 Mahalia Jackson, where she read to students her children’s book The Bench.

During their visit, they also donated vegetable and herb planters for the school and, through Archewell’s partnership with Proctor & Gamble, they filled the institute’s pantry of personal health and hygiene products to help families in need.

FIND LIVE UPDATES ON THE ROYAL FAMILY BELOW