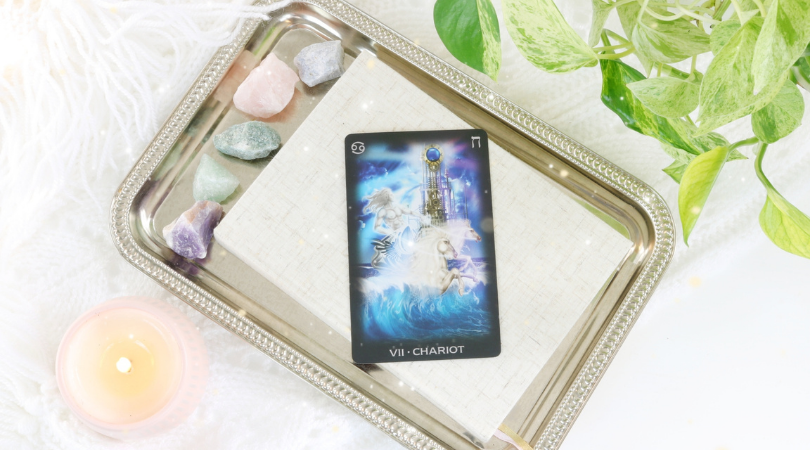 The Chariot is the seventh card in the traditional major arcana. Famously representing victories and willpower, The Chariot is barreling forward with little concern for any obstacles they might face.

The symbolism on this card is relatively simple. The driver rides in a coach pulled by two animals without any reins or harnesses. One animal represents the ego mind, while the other represents the subconscious mind. The cart itself represents our persona.

The Chariot driver appears to be very calm, despite being in a perilous situation with little control. They have loads of confidence and self assurance because they know they will win in the end–no matter what.

In a reading, The Chariot tarot card shows up when a new, fearless pursuit is beginning. It could show a situation where victory is inevitable, as long as the sitter pushes through the difficulties. Confidence and willpower are key.

An unmatched sense of optimistic willpower exists within The Chariot tarot card meaning. Obstacles are of little concern because they have the confidence to overcome anything. They’re fueled by the tension between the ego and the subconscious minds.

There’s an air of competitiveness and arrogance with this card. The Chariot doesn’t yet know that there are things they don’t know. But they will stop at nothing to be victorious. If they’re not victorious, they become overwhelmingly insecure and angry.

This is the first time The Chariot has ever attempted anything on their own. They are proud, excited, and totally lacking life experience. Which is both a blessing and a curse.

The building behind them in the card represents the beginning stages of their lives and personalities. It’s quite simple compared to what an older archetype might construct.

Think about how a young adult feels when they move into their own apartment for the first time. They’re excited, proud, and not yet overwhelmed by the burdens of adult responsibilities. Nothing will deter them because of their eagerness to make this venture a success.

A reversed Chariot tarot card is likely highlighting aggression, anger, and arrogance. Depending on the context of the entire tarot card reading, it’s likely guiding the sitter to be less competitive, especially towards other people.

If we lose control of our competitiveness, we will never win. Be careful not to let competition be degrading to you or your top competitor. In the end, that only hurts everyone’s progress.

Alternatively, a reversed Chariot tarot card could indicate a time where we’re meant to move forward, but are paralyzed. For whatever reason, we aren’t beginning the next chapter. Maybe we’re scared, tense, critical, or waiting for the “perfect” circumstances. But nothing worth chasing is without its hurdles.

This tarot card seeks a melding of healthy competition, victory, self resilience, assertion, determination, and competence. You’re hitting the ground running, and nothing can stop you. Not the tension between the ego and the subconscious, not your lack of knowledge or experience, and certainly not any rivalries.

The Chariot tarot card wants us to ask ourselves–am I ready to thrust myself forward without fear of obstacles? Do I have the self confidence to easily reach success?