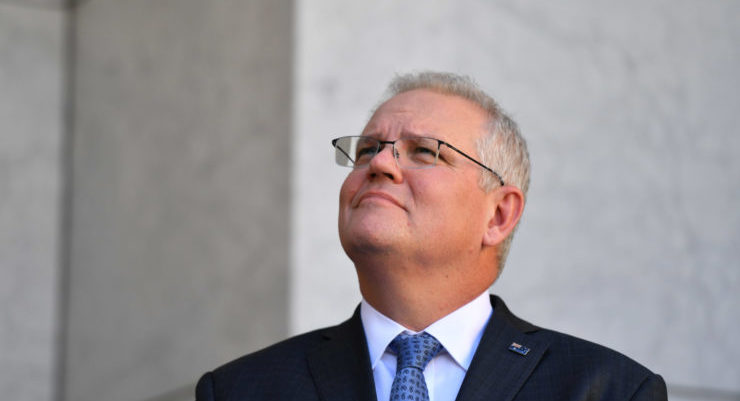 Overcautious, sacrosanct, or just garnering voter cred, the premiers of Queensland and WA have both flip-flopped about opening up at the national 80% double-vaccination milestone — expected mid-November. But Prime Minister Scott Morrison could be about to smoke them out of their, erm, “caves”. The federal government will end emergency support money the fortnight after the country reaches the 80% coverage (of the over-16 population), as the AFR reports.

States and territories will see weeks of tapering financial support — which is currently propping up businesses and households — leading up to the day when leaders will have to foot the bill instead, The Australian ($) continues. It could affect as many as 2 million Australians who have received the “COVID-19 Disaster Payment” since June, news.com.au adds, and who will then have to resort to social security if they’re still unemployed.

It probably also means the end of state-wide lockdowns, too — a state or territory would need to find the funds for their population’s financial aid if they shut down after 80% coverage. But some have said opening at 80% is inequitable for vulnerable groups like Indigenous Australians, disabled people, prisoners, and people living in rural and remote Australia, who face barriers to quality health care, The Conversation says.

The Daintree tropical rainforest will return to the hands of the Eastern Kuku Yalanji people in a historic deal with the Queensland Government, Guardian Australia reports. It’ll join the likes of fellow UNESCO-listed sites Uluru and Kakadu, which also have Indigenous custodians. The deal will eventuate in “mentoring, training, apprenticeships, work experience and employment”, traditional owner Chrissy Grant says. Several Indigenous communities actually live in the Daintree, she added.

In other positive environmental news, the NSW Nationals have shown up their federal counterparts by backing a state Coalition plan to halve NSW’s emissions by 2030, the SMH reports. The country’s most populous state actually committed to net zero by 2050 back in 2016, but have now promised to reduce emissions by 50% in the next decade. Deputy Premier John Barilaro, of the Nats, says regional and rural NSW can look forward to low-emissions technologies like batteries and hydrogen, while Premier Gladys Berejiklian says households will save $130 on their bills, too.

Here’s a thought, as The Conversation asks: what if no state or territory waited for the dawdling federal government, and each committed to ambitious climate goals themselves? NSW’s target is the second strongest in Oz — the ACT say they’ll slash emissions by 65-75% by 2030. And earlier this year, the Victorian government committed to a 45-50% reduction by 2030, too.

French President Emmanuel Macron has said they will stop “being naive” in the wake of Australia ghosting his country to join AUKUS, ABC reports. Macron made the comments — the first from him since we bailed on a $90 billion submarine deal — as France announced a new defence deal with Greece. They’ll spend $4.8 billion on between six and eight French naval warships amid brewing tensions with Turkey, as Al Jazeera reports. It actually almost turned into an all-out war last year when Turkey sent ships to look for oil and gas in parts of the ocean that Greece considers theirs, as Foreign Policy explains.

Macron continued that “we need to react and show that we, too, have the power and the capacity to defend ourselves”. But he appeared unruffled, saying that Australia’s French exit (mind the pun) doesn’t change the fact that France is Europe’s biggest player in the Indo-Pacific. Prime Minister Scott Morrison’s requests to speak directly with the French president have so far been rebuffed, Guardian Australia says.

In 1953, an artist named Ad Reinhardt famously declared: “The more stuff in it, the busier the work of art, the worse it is. More is less. Less is more. The eye is a menace to clear sight. The laying bare of oneself is obscene”.

Well, Reinhardt would be happy to see how Danish artist Jens Haaning is carrying the torch. Haaning created two artworks — one in 2007 and another in 2011 — where he affixed banknotes onto a canvas, as a commentary on the average incomes in Denmark and Austria, respectively. The Kunsten Museum of Modern Art loved them. They offered him the equivalent of A$3900 to remake both, and provided A$115,000 worth of krone banknotes as the material. When they unwrapped the canvases, however, they were met with two completely blank slates. The works were, tellingly, entitled “Take the Money and Run”.

They’re suing Haaning now, but he doesn’t care. He’s certainly not paying it back. “The work is that I have taken their money,” he said. “I encourage other people who have working conditions as miserable as mine to do the same. If they’re sitting in some shitty job and not getting paid, and are actually being asked to pay money to go to work, then grab what you can and beat it.”

Hope your Wednesday includes a little bit of rebellion, too.

The pint-sized eco-warrior doesn’t care for the green rhetoric of leaders around the world, dismissing their “empty promises” which she says have “not led to action” at the Youth4Climate summit in Milan.

“Academic and technology researcher Suelette Dreyfus speaks of the high personal cost of being a friend of Assange’s. ‘I wrote a book with Julian Assange in 1997, and we’ve stayed friends. Nothing could prepare me for the personal cost of that friendship in terms of the surveillance inflicted on me.

“‘The physical surveillance was so obvious that at times friends and relatives observed it and asked about it. At times, their presence frightened my children. My phone was stuffed for months. Out of place people followed me to country Victoria. Strangers entered my house when I wasn’t there — and they didn’t know I could determine they had been there. A surveillance team even followed me to Queensland on holidays with my family. It was nuts.’”

Public wakes up to Coalition’s love of secrets. The PM has only himself to blame

“Staff from the prime minister’s department copped an absolute roasting in a Senate inquiry yesterday over a proposed bill that would shield national cabinet from scrutiny and exempt it from freedom of information laws. This is despite it being found to not be a cabinet under constitutional law, and therefore not entitled to cabinet confidentiality …

“Legal experts say Morrison’s attempt to keep national cabinet shrouded in secrecy could have serious implications for democracy, especially if it means a government can just rename any body a ‘cabinet’ and make it privy to cabinet-in-confidence.”

“Last week and weekend saw a series of meetings in Beijing between the government and major energy groups aimed at trying to build sufficient energy reserves for residential heating in winter — while at the same time trying to avoid a surge in the prices of coal, gas and oil above the record levels amid blackouts and shutdowns caused by lack of power capacity.

“Unusually, power shortages have attracted considerable media attention: the People’s Daily government media outlet reported on Sunday that a power shortage in the north-eastern industrial province of Liaoning was at a ‘severe level’, partly due to declining wind power (which has been a problem in Europe and the UK, along with a shortage of gas).”

We underestimated Trump before. It didn’t go well. — Jamelle Bouie (The New York Times): “Sometimes, and much to our detriment, we find real events are simply too outlandish to take seriously. Many professional Republicans, for example, initially dismissed the movement to “Stop the Steal” as a ridiculous stunt. ‘What is the downside for humouring him for this little bit of time? No one seriously thinks the results will change,’ an anonymous senior Republican official told The Washington Post a few days after Joe Biden claimed victory …

“Now, 10 months after the election, ‘Stop the Steal’ is something like party orthodoxy, ideological fuel for a national effort to seize control of election administration and to purge those officials who secured the vote over Donald Trump’s demand to subvert it. Assuming that he is in good health, Trump will almost certainly run for president in 2024, and if he does, he’ll do so in a Republican Party pacified of any resistance to his will to power.”

Stop thinking our kids will be lumbered with massive government debts; they won’t be — Ross Gittins (The SMH): “If you’re one of the many who worry about how we’ll pay off the massive debt the Morrison government has incurred during the pandemic, the Parliamentary Budget Office has reassuring news. The budget office — which is responsible to the whole Parliament and so is independent of the elected government — has prepared its own projections of the budget deficit and debt over the decade to 2032 …

“So the budget office’s reassuring news is not that we’ll be able to repay the debt — it’s unlikely we will — but that it accepts Scott Morrison’s assurances we don’t have to repay it to keep out of trouble. That, unless our leaders go crazy, we can outgrow the debt and that the interest bill isn’t likely to become a significant burden on taxpayers even though the debt remains unpaid. These are not controversial propositions among economists. If you find them hard to believe then — forgive me — but you don’t understand public finances as well as you should.”

Al-Qaeda could threaten US in a year — US general (BBC)

‘Humbled and heartbroken’: WHO finds its Ebola staff abused women and girls (The Guardian)

Lake Tahoe, sequoias survived wildfires thanks to forest thinning, but much more is needed, researchers say (The Wall Street Journal)

Health and fitness: How to stay fit after you’ve hit 40 (The Australian) ($)