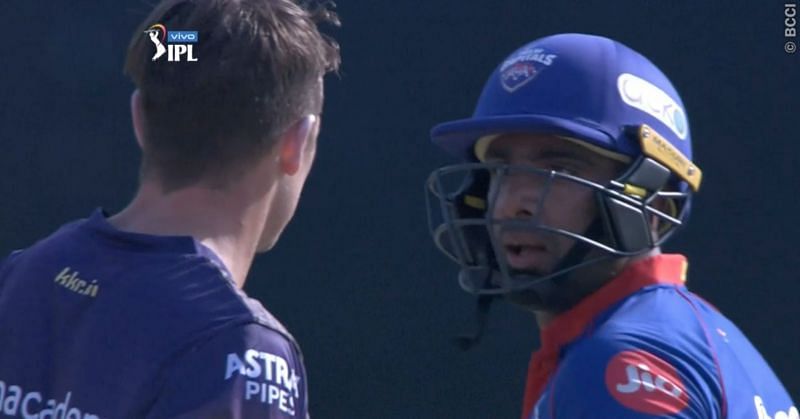 Ravichandran Ashwin was not a happy man after being dismissed in the Delhi Capitals’ IPL match against the Kolkata Knight Riders. In the game played at the Sharjah Cricket Stadium, the temperature was on the rise on the field.

As the Delhi Capitals struggled to get runs on the board after losing the toss and being sent in to bat first, there was a heated exchange of words between Ravichandran Ashwin and some of the Kolkata Knight Riders players.

In the final over of the Delhi Capitals innings, Ravichandran Ashwin was dismissed by Tim Southee after he miscued a pull shot and the catch was taken by Nitish Rana at deep backward square. What followed was not the most pleasant of incidents.

Something seemed to have gotten Ashwin all riled up, as he exchanged heated words with Southee and then with KKR captain Eoin Morgan. The matter could have easily escalated into something bigger. However, Dinesh Karthik stepped up to intervene and send Ashwin back on his way to the dressing room.

Delhi Capitals head coach Ricky Ponting was spotted chatting with umpire Nitin Menon after the end of the first innings. It remains to be seen what that chat was all about and whether it was linked to the incident.

The Delhi Capitals could only manage a total of 127/9 in their Indian Premier League 2021 clash against the Kolkata Knight Riders in the scorching heat at Sharjah. It was a difficult pitch to bat on and the Capitals’ task was made even more difficult thanks to some superb bowling by KKR.

Last season’s IPL finalists failed to hit a single six over the course of the 20 overs. This is the first time this has ever happened in an IPL game at the Sharjah Cricket Stadium.