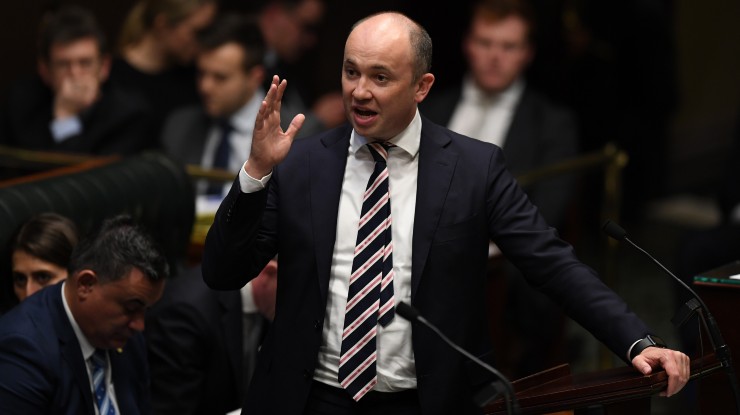 NSW Environment Minister Matt Kean has managed to do what Prime Minister Scott Morrison can’t: get the Nationals on board with an ambitious emissions reduction target — the state government just committed to halve emissions by 2030.

The policy has clear backing from the New South Wales Nationals, including Deputy Premier John Barilaro, a man not afraid to publicly rebuke the Liberals on environmental matters. Meanwhile, the federal Nationals are falling to pieces over a move towards a largely symbolic target of net zero emissions by 2050. If Morrison does cut a deal before Glasgow, it is likely to contain major concessions.

How did NSW manage to lock in its target without major internal fallout? In part it’s because its Coalition government has always been far more realistic than its federal counterparts. That has been driven by Kean, the minister who has vocally pushed for climate action at risk of losing popularity with Liberals in Canberra. It’s also because it doesn’t have the toxic influence of Queensland to contend with.

As Australia choked under a cloud of bushfire smoke two summers ago, Kean made the bold move — for a Coalition MP — of linking the crisis with climate change, lamenting that “ideology and politics” had got in the way of real action.

Later, after returning from Hawaii, Morrison hit out at Kean’s criticism of the federal government, claiming nobody in his cabinet had heard of him.

On climate, exchanges like this have summed up the relationship between NSW and the federal government. While doing the media rounds after the government’s emissions announcement, Kean didn’t hold back: “My message to the Commonwealth is get on with it. This is not only the right thing to do, it is also the economically rational thing to do, because it is in our nation’s economic interest.”

He also had a few words for Nationals Senator Matt Canavan, who recently threatened to “fight” any move towards net zero: “It’s great that Matt Canavan is selling Kodak cameras but it doesn’t count for much when the iPhone is coming.”

Kean has been key to Macquarie Street’s recent dose of climate realism. It helps that he’s ambitious, media-savvy and a key factional powerbroker for the NSW Liberal moderates, with his eyes on the top job. The “future leader” tag draws cynicism from his detractors, but there’s no doubt he’s stamped a more progressive climate vision over the portfolio.

Before adopting the current target, the Berejiklian government had committed to net zero by 2050 (with every state and territory), moved to subsidise electric vehicles, and is trying to one-up Queensland and Victoria on renewable energy.

At times that has stressed the durability of the Coalition with the Nationals.

In April Kean had to do a U-turn on a decision to appoint Malcolm Turnbull to chair a key emissions reduction board. It followed backlash from skittish conservative MPs, and Barilaro’s fears that Turnbull’s call for a moratorium on new coalmines would hurt the party’s chances in the Upper Hunter byelection.

Although Kean backed down that time, the contrast with his federal counterpart, Energy and Emissions Minister Angus Taylor, is stark. Taylor will reportedly agree to a “roadmap” for net zero 2050 but not a target.

But the Berejiklian government’s stance on climate isn’t down to a single minister. It’s also because the Nationals there are far less obstructionist on climate.

At a federal level, most in the Coalition recognise the inevitability and necessity of a net zero target. Within the Nationals, Michael McCormack and Darren Chester both favour an actual target. The latter is taking a break from the Nationals, and mulling a move to state politics.

The Morrison government is being held back by a handful of Nationals MPs and senators, a sub-faction within a sub-faction of government voted for by an overwhelming minority of Australians.

That sub-faction is made up of the largely Queensland-based loyalists of Barnaby Joyce who returned the New England MP to the leadership in June. Joyce, despite representing a NSW seat, still supports Queensland in the State of Origin, and draws much of his support base from there. The loudest pro-coal voice is Canavan, the career public servant and former Joyce staffer. It also includes outgoing Queensland MPs George Christensen and Ken O’Dowd, who both hold seats the government must keep.

In Queensland, which has about two-thirds of Australia’s coal, the Liberal National Party is far more aggressively pro-mining and anti-climate science, and has historically been a big beneficiary of mining sector donations.

There are plenty of Liberals who agree with Kean. Some, like Sydney-based moderate Jason Falinski, are publicly calling out their Nationals’ colleagues. But the Morrison government, and all Australia, continues to be held back by a handful of pro-mining fundamentalists.