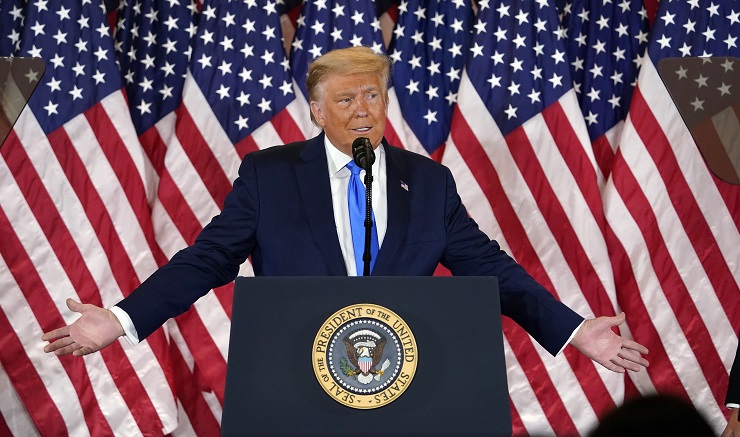 The athlete hits the ground and ploughs ahead in a circular motion asserting that now is not the time to discuss the past, we need to be looking to the future because that is what we are doing and we will continue to do that.

Trump watch It’s a well-established career path by now. Part one: spend years working (and lying) alongside a dangerous authoritarian bully, defending his every outrage. Part two: write a book about the fact that, contrary to your experiences, he was kind of a weirdo. Part three: profit.

The latest entry is from Stephanie Grisham, the Trump press secretary who held no press conferences during her roughly nine months in the role. The book is called I’ll Take Your Questions Now, and has a picture of the podium she never once visited — which is a pretty good gag. It has the usual “I was shocked, just shocked” moments — his explicit pantomine of being “tough” on Putin and his (get this) “casual dishonesty“, something that didn’t apparently land for Grisham between 2016 — when she joined the campaign — and the assault on the capitol building on January 6, 2021, when she finally quit. We suspect this attempt to launder her legacy, like every other of its kind, will fail.

Regardless, it does share with the others at least one great anecdote that will find its way into some terrible future biopic. Grisham reports that Trump had a “terrifying temper” to the extent his handlers designated one White House official known as the “Music Man” to play him show tunes to “pull him from the brink of rage”. Apparently Memory, from Cats, was a particular favourite. But hey, it’s still better publicity for Cats than that fucking movie.

Vax (hesitancy across) the Nation The Australian dedicates pages six and seven to the heading “Vax the Nation”, two pages collecting coverage of issues associated with getting the vaccine into the people of the country and the people of the country out of their houses. We wonder then, flicking back a page, whether page five should come under the heading “Vax hesitancy”?

It’s a full page ad for the United Australia Party, boasting of its 60,000 members (note: a text telling you to sod off isn’t a membership application), crying out for “FREEDOM” and featuring the beaming face of Craig Kelly. Kelly, in case you missed it, has spent the past year promoting unproven coronavirus treatments and spamming people with texts about the “adverse affects” of all vaccines. We wonder if “Australia’s only broadsheet run promotes high-profile vaccine sceptic for money” will make it into tomorrow’s “Vax the Nation”?

What does the Foxtel? Here are a couple of dates for the media watcher’s diary: September 29 and 30. The 29th is when Foxtel holds a “group strategy day” for Australia and Asia; the 30th is the same but for the United States. The strategy will apparently be introduced by News Corp chief executive Robert Thomson and Telstra chief executive Andy Penn.

Will they discuss the big float rumour that’s been around for most of the year and suggests that the pay TV/streaming video business will list on stock exchanges in Australia and the US? Will Telstra bail on its 35% stake for a nice payout, or take its risks with a sharemarket issue? There is also the question of Foxtel debt still guaranteed by News Corp and the ownership of Sky/Fox News. Will News retain Sky/Fox and compel Foxtel to pay for the barking and jabbering of the after dark mob?