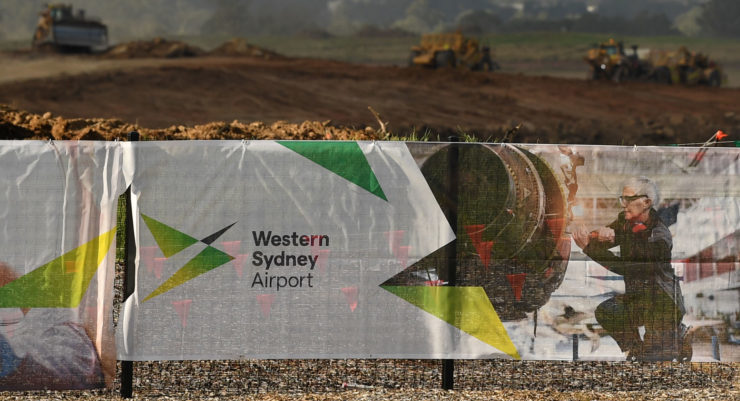 While the Leppington Triangle airport land acquisition by the Department of Infrastructure was not exactly best practice administration, the way the department has managed to get itself in the clear over the scandal certainly is.

The department, under secretary Simon Atkinson, has cleverly used a flurry of reviews to disguise the fact that one of the worst scandals in pure public service administration of recent years — the Leppington Triangle sale had nothing to do with ministers or ministerial staff beyond the relevant minister being asked to sign off on it — has led to precisely no consequences for the bureaucrats who overpaid some Coalition donors for a parcel of land by a factor of 10.

The Australian Federal Police yesterday said it had closed its investigation of the matter, saying it “did not identify any evidence of criminal offending” in relation to bribery, conspiracy to defraud or abuse of public office.

The result isn’t surprising given the scandal always looked far more like a case of spectacular incompetence and industry capture rather than overt corruption.

But the AFP investigation was only the most formal of a variety of inquiries and reports into the scandal commissioned by Atkinson in the aftermath of the Australian National Audit Office’s extraordinary audit of the purchase.

Let’s not forget Atkinson tried to rope in the Department of Finance to share the blame for the debacle, only for secretary Rosemary Huxtable to pull him up in public.

Atkinson got Sententia Consulting to examine the way the deal was made — though, importantly, not whether it was value for money. That report (good luck finding it on Infrastructure’s website) concluded, in a statement of the obvious, that “the department did not undertake all reasonable steps to determine what a suitable cost would be for the government to acquire the property, to demonstrate that the price paid for the property represented an efficient, effective, economical and ethical use of public funds”, but that there was no “poor integrity, criminal activity or personal benefit for officers involved in the transaction”. They were just too eager to please the sellers.

Atkinson also got consultants KPMG to review the “culture and capability” of the relevant departmental areas. KPMG, one of the world’s biggest enablers of multinational tax avoidance and probably the most scandal-plagued of the big four consulting firms, certainly knows a thing or two about workplace cultures. It produced a “forward-looking” report on how the area responsible for the scandal, the now-vanished Western Sydney Unit, was overworked, lacked clear guidance had a “can do” culture.

Being cultural, of course, no one was specifically to blame for creating the problems that led to the scandal.

Atkinson also got consultant and former public servant Vivienne Thom to investigate the public servant responsible for the purchase. There was also an investigation by adviser Barbara Deegan of the lesser issue of the handling of conflicts of interest by people involved with the unit. Neither of those investigations will ever see the light of day.

Many of the public servants involved, including some of the most senior who were not responsible for the acquisition but oversaw the work of the unit have moved on. One of the persistent problems of holding anyone accountable in the public service is that invariably it’s not the actual perpetrators who end up fronting Senate estimates, but successors and replacements who can plausibly respond “I wasn’t in this position at the time” or “I’d have to take that on notice and seek advice” to probing questions.

What we’re left with from the flurry of reviews was that no one was really responsible for such an outrageous decision, it kind of just happened as a result of the WSU culture and inexperience on the part of public servants.

The closest we’ve got to an explanation for why taxpayers’ money was wasted on such a scale is that which appeared back when the auditor-general examined the whole sordid mess, and noted that the bureaucrats were worried that Leppington Pastoral Company was “a sophisticated and well-resourced entity” with “access to substantial resources including legal and property advisors”. So they overpaid.

That’s the enduring lesson that won’t have been lost on any other company dealing with the Commonwealth — threaten litigation and public servants will overpay you, thinking they’re saving money in the long run, when they’re simply giving the wealthy and influential a better deal than the rest of us could ever get.