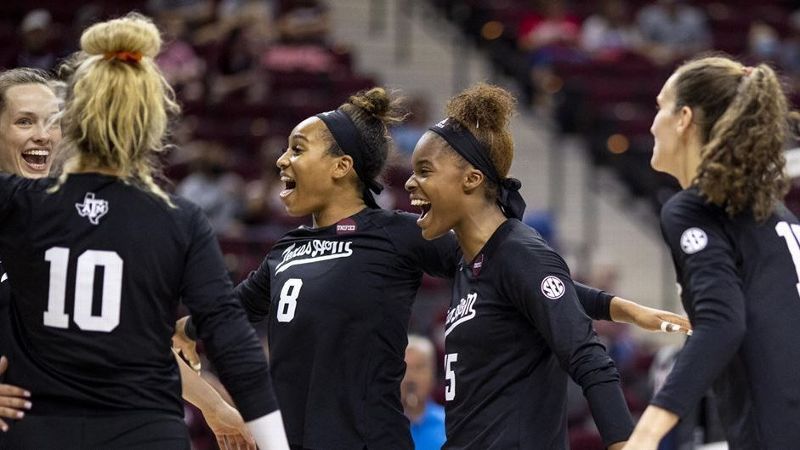 The victory marks the fourth top-25 win under the direction of Laura “Bird” Kuhn and first of the season for the Aggies. Setter Camille Conner was a kill shy of a triple-double, finishing with nine kills on .421 hitting, 45 assists and 14 digs. Morgan Christon compiled a match-high 21 kills, while Lauren Davis (16) and Destiny Cox (15) also turned in double-digit numbers. Macy Carrabine led the Aggies’ defensive efforts with 23 digs.

Lauren Davis’ first kill of the match in a 3-0 run gave A&M the 6-5 edge. The Lady Vols responded with four-straight points to jump in front, before charging ahead 17-10. Christon’s second kill at the end of a long rally sparked A&M’s offense, as the Aggies went on a 4-0 run, highlighted by two kills from Destiny Cox. A solo stuff in the middle by Mallory Talbert helped the Maroon & White chip away at Tennessee’s lead, leveling the set at 21-all. Another block by Talbert knot the set at 24, before the Lady Vols squeaked by for the 26-24 win.

Tennessee jumped out to an early lead in the second frame, before a kill from Camille Conner brought the Aggies back within reach, sitting at a 7-5 deficit. The Lady Vols took their largest lead of the set, but Davis and Talbert pieced together a 7-1 run on their own to even the set at 18-all. Talbert’s second ace dropped on the back line forced the Lady Vols to use a timeout with the set deadlocked at 21. The run continued and was highlighted with a block from Cox and Madison Bowser off the bench to push A&M in front, before a service error by Tennessee handed the Aggies the second set, 25-23.

Conner got in on the scoring action in the third, registering back-to-back kills, despite the Aggies trailing by two. The Lady Vols fought off the threat by jumping in front, 12-7, before Christon reached her 11th double-digit kill performance of the season in a four-point scoring run to force a Tennessee timeout. The Lady Vols used a 5-0 scoring run to pull ahead late in the third, grabbing the 25-17 win.

After a slow start in the fourth, a pair of kills from Conner helped the Aggies fight their way back to level the frame at seven-all, before another kill from the fifth-year setter pushed A&M ahead. A big swing on the outside from Cox gave the Maroon & White a one-point edge, sitting at a 19-18 advantage, before a block by the junior and Bowser extended their lead. A pair of Christon kills sealed the fourth for the Aggies, 25-21, to force a deciding fifth set.

A successful challenge by Kuhn reversed a call in favor of the Aggies early on, as each team exchanged points. Conner’s ninth kill pushed A&M ahead, 6-5, while a block and kill from Davis helped the visitors hold a three-point advantage at the media break. Davis and Christon continued to score on the outside late in the set for the Maroon & White, as a kill from Davis sealed the set, 17-15.

Texas A&M will return to Reed Arena next week for a two-match series with Georgia on Oct. 7-8. Thursday’s match is highlighted by the Aggies’ annual Dig Pink match. On Friday, fans with a ticket for Saturday’s football game against Alabama receive free admission to the volleyball match by showing their ticket at the door. Additionally, the first 500 fans will receive a Reedling Brothers match day hat and 12th Man Centennial mini statue.

On the fight of the team…

“We talk about the response all the time and we grinded those first two sets to put ourselves back in position. For the team to start believing and earning their own points totally flipped the momentum. I’m proud of the their fight and their finish to earn that win.”

On Camille Conner’s ability to manage the court… “Camille (Conner) is great at managing the court and making an impact in critical moments. Her two blocks in the fifth were huge. She wills it with how she competes, but she also keeps our team steady.”

Visit 12thMan.com for more information on Texas A&M volleyball. Fans can keep up to date with the A&M volleyball team on Facebook, Instagram and on Twitter by following @AggieVolleyball. Print Friendly Version