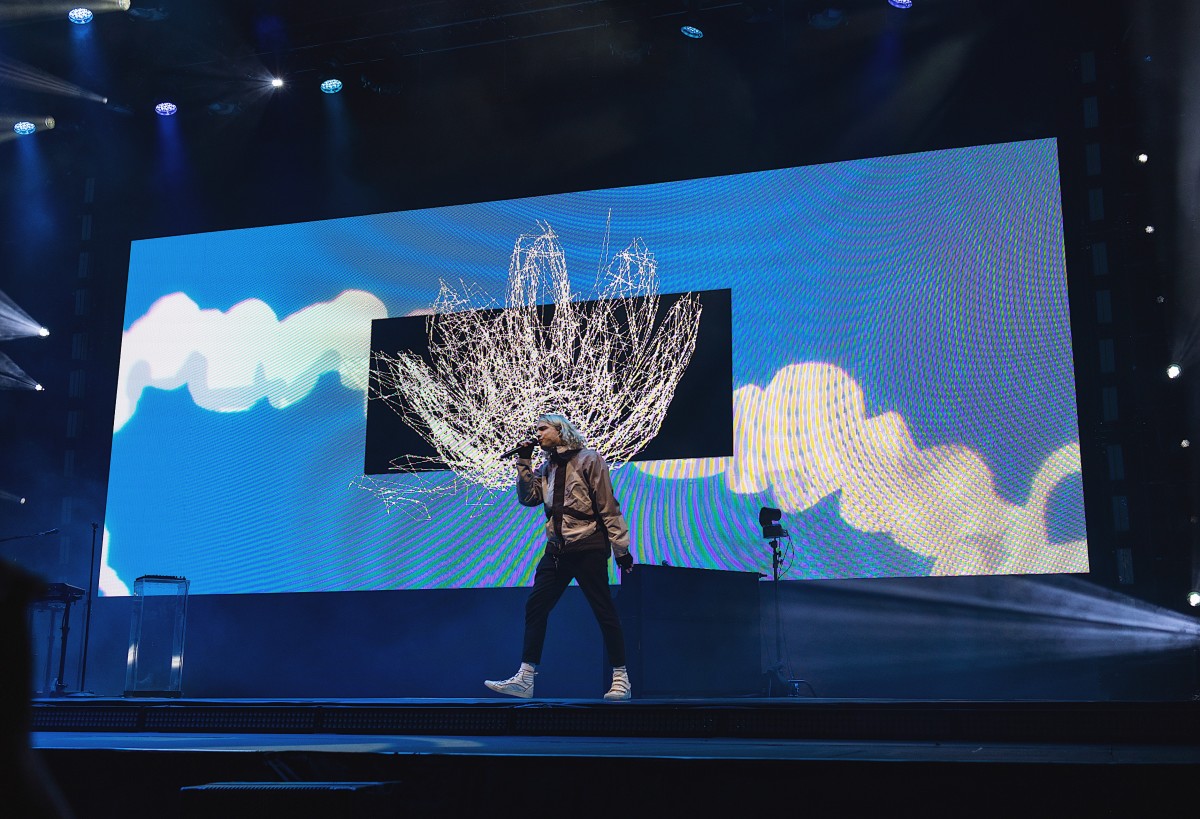 When we first found out that the venue for Porter Robinson‘s Second Sky was changing  on pretty short notice due to construction near César E. Chávez Park, the original venue for this year’s Second Sky, the mixed feelings of panic, concern, and anger were real. Fans were stressing and panic-selling their tickets because they thought the festival was ruined and news that the venue outside Oakland Coliseum being a barren parking lot spread like wildfire.

But, Porter Robinson being the perfectionist he is and not wanting to disappoint his fans in the slightest, managed to pull off something amazing. Goldenvoice, the producers of Second Sky, tagged in Nassal, the designers behind The Wizarding World of Harry Potter at Universal Studios and Star Wars Galaxy’s Edge at Disneyland to create an extraordinary experience. With the days counting down, the folks at Nassal managed to construct a physical rendition of the world of Porter Robinson and Nurture, his sophomore album.

Entering the Oakland Coliseum, you walked in sort of a circle through three checkpoints. First, to check your Covid-19 vaccination status, which provided onsite rapid-testing and thorough verification, then a security checkpoint, and finally, the cherry-blossom adorned forest, warmly welcoming everyone into the realm of Second Sky.

We arrived shortly before Jacob Collier’s set and took advantage of the intermission. First, appreciating the fan-submitted Second Sky artwork on the huge LED panels, we then ventured around the 250,000 square feet of AstroTurf laid out to ensure people forgot that they were on a parking lot and instead transported into a wondrous theme park.

We made our way to the four main attractions of the festival which were the forest gates at the entrance, the Tomb of the Ancient Kings, an abandoned ruin where a giant stone shrine to Potaro, the adorably blue blob and mascot, lay rest. The shrine reminded us of a temple straight out of The Legend of Zelda, which was just amazing.

Further to the left of the grounds, you encountered a crystal cavern that lit up at night, and then in the heart of the grounds, à la The Great Deku Tree from Ocarina of Time, was a gigantic tree covered in vines and blossoms that also came to life at night. This huge tree also served as a great photo op and meet up location, which is certainly better than trying to tell your friends to meet “left of the speakers, towards main stage, between the water stations and in front of a currently trending meme totem..

The crowd deserves a lot of praise this weekend. It was our first West Coast festival in years and the people were kind, wholesome, and clearly having such a fun time. Masks were worn by everyone and it felt amazing to see others look out for one another with a simple courtesy. The crowd had some zingers for Porter during his live stream of Second Sky on Sunday, such as “SHE MADE YOU” when he was shouting out his mom, “THAT’S THE MOON, B*TCH!”, when the camera panned towards an almost full moon, and of course “PLAY SPITFIRE” which Porter gently replied “Not this time!”

The food and drink, along with the merch lines were aplenty although extremely busy. There were separate vendors inside VIP, but there were a lot more options in GA. The boba line was so long that we thought we were waiting for a Supreme box-logo drop, but that’s just how it is in on the West Coast. The most coveted merch item was probably an adorably small Potaro plush keychain, which seemed to have sold out quickly into the hands of dedicated line-sitters.

Moving onto to the music, Jacob Collier showed off his vocal range with his live band and played a relaxing yet upbeat set to enjoy in the cool Oakland weather. “All I Need” was a song we have wanted to hear live for so long and it was fantastic listening to it amongst the crowd. Jon Hopkins took the stage next and switched up the tempo. There were a lot of fans that seemed uncertain or new to his music, but that tone changed when “Emerald Rush” came on. It’s a track that anyone can appreciate and inspires a pep in your step. We hope that he gained a lot of new fans after his Second Sky performance!

One subtle thing we came to appreciate is how the genres of music were broken up so well. You started with Porter’s new side project, Air To Earth, a more dance and sample-driven live-only performance, into Wavedash’s incredible energy and hard-hitting music, and then Knower, a very pleasant palate cleanser. Switching it up again from Jon Hopkins to Toro y Moi and his live band introduced strong vocals and funk into the air. “Freelance” and his collab with Flume, “The Difference” got people moving and dancing. Hearing “Ordinary Pleasure” for the first time live was a treat as well since his voice shined, the synths were groovy, and the instruments were crystal clear.

During the intermission for Jai Wolf, we walked over to the giant Second Sky letter installation where we saw people lined up for photos, some sitting inside the letters, squads taking group pics, and even Potaro making a guest appearance and photo-bombing some shots.

Jai Wolf was up next and despite some technical difficulties with the time code system (the software used to synchronize visuals and music together) failing for a short period, he still gave it 110%. That’s another thing we loved. All the artists looked so happy to be there and gave it their all; it was so refreshing.

Jai Wolf’s technical difficulty was tough to watch but we sympathized with him because of the countless tireless hours put in by him and his team. Despite the previous day’s challenges, Jai Wolf and his team fixed all of the issues for Sunday and totally earned himself a redemption arc. Watching the live stream, we could tell he was so elated and loved every second on stage, proving just how far he’s come both creatively and musically which made us so happy.

Nearing the sunset on Saturday, Madeon confidently strutted onto the stage with his sparkle-encrusted pants and gloves. It was absolutely clear he found outfit inspiration from Michael Jackson, and even channeled the famous artist’s dance moves as he ran in place between his two setups. In one word, his new Good Faith Forever set was breathtaking. He mentioned that he did not want to play his new live show in the day because the visuals and music truly come to life at night where you can see everything as creatively intended. But, this wasn’t just any festival and said he would do it because it’s for Porter.

If we can talk about the absolutely mind-blowing lights and bright neon explosions throughout, you could know a fraction of the work put in between him, his team, and The Architects, the designers who holed up with him in an Airbnb to create Good Faith Forever. Although it was not live streamed on Sunday, it was an incredible musical journey that kept parts of his first Good Faith tour, but introduced completely new elements and visuals to round out the set at the end.

As the crowd quickly filled up for the final set, we thought about how a single artist’s festival which is an immense feat in itself, challenged the sheer crowd and size of Coachella‘s main stage. While not quite there yet, the simple fact that one person’s music inspired all of this is nothing short of awe-inspiring.

Onto the moment everyone had been waiting for – seeing Porter perform his new Nurture live show at Second Sky after a year and a half. Although his online Secret Sky festival during the pandemic was great, it did not compare to how amazing it was watching it live, in a crowd of hyped fans, with spectacular visuals and heartwarming fireworks.

He opened with a live edit of “Lifelike” with “do-re-mi-fa-so-la-ti-do” and “Wind Tempos” mixed together into a beautiful and emotional hodgepodge. We more or less experienced the entirety of the Nurture album, except for “Dullscythe,” which we’re not sure why it wasn’t played as it probably could have fit into “Fresh Static Snow” or “Flicker,” but we’re sure there was a good reason as it’s probably the most different sounding track from the album. Our favorite live edit, mainly because of how surprised we were when we heard it and how perfect it sounded together, was the “Language” x “Unfold” live debut. It combined two similar sides of the spectrum – “Language” being emotional, yet very upbeat and “Unfold” being emotional and incredibly ethereal.

We got several short intermissions during his set that injected a plethora of emotions and a chance for Porter to catch his breath. We saw Porter’s childhood video portraying innocence and youth into “Mother,” where he shouted out his mom and entire family for supporting him, got a huge “Thank you, Rika!” from the crowd for “Blossom,” and hilariously used Anthony Fantano’s review of Worlds as a transition for “Divinity.” A webcam from Porter’s “NurtureBook Pro” displayed him smiling ear to ear and the crowd in a highly fuzzy and aesthetically pleasing way as well. Finally, he thanked his fans for sticking with him throughout the years despite all the waves he’s rode musically and allowing him to create what he loves, especially through his “f**kboy electro house years.”

It’s odd yet pleasantly surprising how most tracks off of Nurture felt so perfectly timed. After such a long, lonely, and extremely challenging pandemic and period of isolation, live edits of all the songs provided sweet release for all of us. It felt so motivating and moving that many fans, including us, were brought to tears of various quantity throughout the set and watching Porter give it his all both nights moved us that much more. Fireworks were common throughout the set and we liked that they weren’t saved for just the big drops or moments. It didn’t matter that there wasn’t any pyro, the consistent fireworks even through more mild drops gave the set even more life. The cherry on top was definitely the crazy long finish of fireworks during the encore, where a Nurture live edit of “Get Your Wish” carried us into the final song — a piano outro of “Goodbye to a World.”

We truly had such a grand time at Porter Robinson’s 2021 Second Sky and loved how Porter and his entire team overcame the numerous challenges to pull off an amazing and safe weekend for all festival goers. We truly hope you grab tickets to see him on tour, where he will be supported by Jai Wolf and James Ivy throughout the fall and winter months.