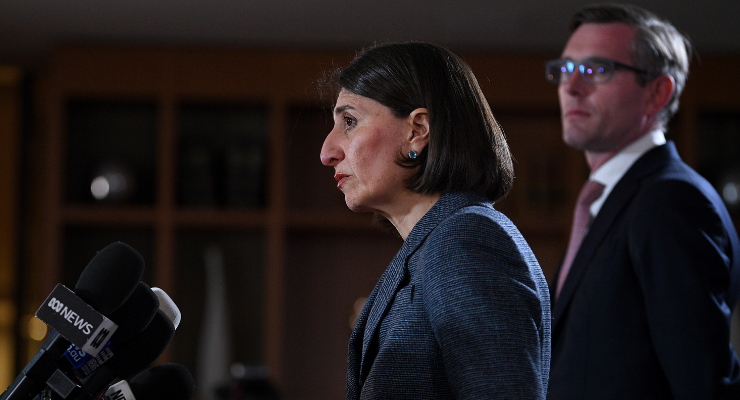 NSW Treasurer Dominic Perrottet is reportedly set to become NSW premier, ABC says, after Gladys Berejiklian resigned following the announcement that ICAC would be launching an investigation — in this case, probing her official conduct regarding her ex-lover MP Daryl Maguire. Planning Minister Rob Stokes is throwing his name in the leadership ring too — but Perrottet, 39, reportedly secured the majority of caucus votes last night after he struck a deal to insert Stuart Ayres as deputy and Matt Kean as treasurer, The Australian ($) reports. Perrottet has one less competitor to worry about after Transport Minister Andrew Constance announced he was quitting to take a stab at a federal seat instead, as 9News says.

Even though he’s been a loyal right-hand man since 2017, right-leaning Perrottet is not actually in the dominant faction in the NSW Liberals — him taking the top job would break a more moderate lineage set by predecessors Berejiklian, Mike Baird, and Barry O’Farrell. Perrottet’s a proud conservative Catholic who actually voted against decriminalising abortion in 2019, ABC reports (Stokes did too, as the SMH says). Almost as soon as Berejiklian stood down, Perrottet’s 2016 Facebook post started doing the rounds where he called Donald Trump’s election win “a victory for people who have been taken for granted by the elites”. He continued: “If you question man-made climate change, you are not a sceptic.”

LIFESTYLES OF THE RICH AND FAMOUS

Overnight the Pandora Papers became the biggest ever leak of offshore data, with oodles of revelations showing how the rich and powerful hide their wealth and avoid tax. Among them, the King of Jordan’s secret property empire which is worth more than US$100 million, as BBC reports, the Czech PM’s purchase of a £13 million French mansion using offshore companies, as The Guardian delves into, the Crown estate’s purchase of a £67 million  London property from the family of the Azerbaijan ruler, as The Guardian reports, and former UK PM Tony Blair’s property purchase via an offshore firm that saved him £300,000 in tax, as BBC has.

Embroiled in the leak are a staggering 100 billionaires; 35 current and former presidents, prime ministers and heads of state, as well as 300 government ministers, judges, mayors, and military generals in more than 90 countries, The Guardian reports. The papers were leaked to the International Consortium of Investigative Journalists (ICIJ) in Washington who shared it with The Guardian, BBC, French outlet Le Monde and The Washington Post ($). It’s going to be an explosive few days of reporting as the story unfolds, folks, so settle in.

WINNING $1M? YOU’VE GOT A SHOT

A $1 million lottery prize for getting vaccinated has been announced, the SMH reports. Fully vaccinated Australians are in the running to cash in on a $4.1 million kitty created by a group of companies and philanthropists who want to drive up inoculation rates fast. It’s a model used already in the US to some success — indeed the Vax-a-Million lotteries boosted Ohio’s jab rate by 45%, CNN reports.

The big-ticket item in Australia’s vax lottery — $1 million in cash — will be drawn on November 5, SBS reports, while more than 3000 $1000 gift cards will be awarded this month. All Aussie adults can enter the competition online as long as they’ve had their first jab on or before October 31. So far, 79.4% of Australians (16+) have received one dose of a COVID vaccine, while 56.5% have received both.

Reading between the lines of a redacted document — whether it be the Mueller report, the CIA’s UFO documents, or simply the AFP’s April Fools joke — can sometimes be more thrilling than the lines you’re able to see. What secrets lurk behind those black bars? Of course, one can be too effusive with the sharpie — following Hurricane Sandy in 2013, a sheepish New Jersey Transit department provided four pages of their hurricane plan, each filled with a single unbroken black box (very Yossarian energy), as Buzzfeed News reports.

Redaction actually dates back at least several centuries. In 1791, Marie Antoinette was in close correspondence with rumoured lover, Swedish count Axel von Fersen. The French national archives have redacted copies of their letters — researchers wondered if that wasn’t the count’s great-nephew trying to protect the family’s reputation from the alleged affair. Now, 150 years later, a new x-ray technology has allowed them to see beneath the blacked-out lines, an incredible new insight into the ill-fated queen’s thoughts.

But some mysteries remain just that — the new lines do not prove whether von Fersen was anything more than a friend. Researchers uncovered words like “beloved”, but they say it’s likely the historical equivalent of the kissy-face emoji — “You might use it to mean ‘bye’ to a friend, and yet someone who doesn’t know about our emoji culture will assume you must be deeply in love”, Catriona Seth says. Her counterpart, Anne Michelin — who is French, I should add — counters dryly: of course Antoinette had an affair. “All the queens and all the kings in France had this love affair”.

For all our disagreements, I never doubted Gladys’ dedication to New South Wales, or her work in the service of it. I thank her for her service.

The NSW Opposition Leader didn’t sound very, erm, oppositional, when gifted a huge scandal to peddle to voters — his chief rival was taken down by an alleged corruption scandal in a party desperately trying to shake off its brown-paper-bag reputation, after all. A dignified response or a missed opportunity? You be the judge. Minns contended that it was still a “huge ask” for Labor to take the 2023 election after bench-warming for 12 years.

“Corruption is the permanent stain on NSW politics and Berejiklian failed to understand that her misjudgments in relation to Maguire were utterly unacceptable in such a state. That failure was all the greater since the O’Farrell, Baird and her own governments also had their share of ICAC inquiries and police investigations — and because she herself had decided that blatant pork-barrelling was acceptable politically, even as her own office shredded evidence of it.

“Without those two remarkable misjudgments, Berejiklian could have gone down as a historic leader — a true successor to Nick Greiner, who oversaw a transformation of Sydney’s infrastructure while maintaining strong fiscal discipline, kept the rotten NSW Labor Party out of power for another term, presided over strong climate action and investment in renewables, and who dealt — until mid-2021 — with the crisis of the pandemic calmly and effectively.”

“The legal profession is no exception. In 2019, SBS reported that 15% of NSW Supreme Court judges attended Riverview College, a prestigious boys’ school on the north shore. Of the 58 judges in the Supreme Court, just 13 are women. Should we be surprised that a row of Australia’s most elite judges reinstate standards that privilege masculinity, whiteness and the upper class?

“First Nations people are imprisoned at a rate 12.5 times higher than non-Indigenous Australians, often for trivial offences such as unpaid fines. Where is this leniency when the defendant is not white and cushioned by class privilege?”

Windsor and Oakeshott ride again to force parties on climate

“Both major parties have failed the Australian electorate on climate change, [Oakeshott] says: ‘The time for talking is over. We do not have time on our side. Australia’s elected representatives have now wasted close to a decade failing to take the necessary action on climate change. It is now or never.’

“He tells Crikey that an independent member ‘can deliver substantial progress on complex issues. A big lesson of the recent period is that political parties are struggling with the question of whether they are fit for purpose. Head office is all about donations and has a fixation with polling and these are getting in the way of Australia progressing’.”

Thermal coal surges to record on energy squeeze (The Australian) ($)

Up to 3200 paedophiles worked in French Catholic Church since 1950, independent commission says (CNN)

Is wokeness really political kryptonite for the Left? — Nicholas Reece (The Age): “In Australia the major party of the centre-left, the ALP, is enjoying one of the more electorally successful periods in its long history … The ALP currently holds 408 seats in Australian parliaments while the Coalition parties (Liberal, National, Liberal National, Country Liberal) hold just 329.

“So how are left-wing parties enjoying electoral success when their vote is declining? The explanation lies in the fact that major parties on the right are also beset by problems, which are splitting their voter base and causing their overall vote to decline in a similar way to their counterparts on the left. This in turn, is also being driven by deeper forces at work in the political system.”

To vaccinate against COVID-19 or not has become the moral question of our age — Nick Cater (The Australian) ($): “Last Friday Daniel Andrews made vaccinations all but compulsory in Victoria, although he did not put it in those terms. Instead, his chief health officer issued an extensive list of occupations where workers would need a jab to go about their business. Trappist monks have not been included as far as we can tell, but from Sunday week only vaccinated priests will be allowed to preach, provided it’s on Zoom.

“It seems reasonable to most people that a healthcare worker should be vaccinated, just as we expect them to wear masks and gloves. The question of whether the same rule should apply to supermarket attendants, car mechanics, journalists, horse trainers, cockroach poisoners and stump grinders, however, is one best decided by their employers. The responsibilities of an employer under workplace safety laws are comprehensive and, where disputes arise, can be tested in court.”