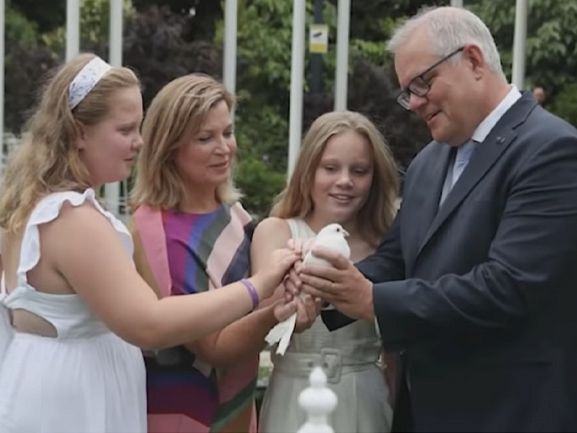 While many Australians were unable to celebrate Father’s Day due to lockdowns, the Prime Minister travelled interstate to see his children, writes Hannah Thomas.

ON THE EVENING of Friday 3 September, whilst the majority of Australia’s population was in lockdown, Prime Minister Scott Morrison boarded an RAAF VIP jet at a cost to taxpayers of more than $2,000 and flew from Canberra to Sydney to spend Father’s Day with his children. Morrison received approval from A.C.T. Health to return to Canberra on Monday (again on a flight which cost taxpayers more than $2,000) without having to quarantine for two weeks, subject to conditions such as regular testing.

Morrison’s actions may have been within the rules for essential workers in the A.C.T., but they were still a slap in the face for the millions of Australians forced to spend Father’s Day separated from their family — Victorians for the second year in a row.

As Bill Shorten put it:

“It’s not that he doesn’t deserve to see his kids, but so does every other Australian and I think when your people are doing it tough, you’ve got to do it tough, too.”

Revelations this past week confirm, beyond all reasonable doubt, that the Government’s handling of the vaccine rollout has been nothing short of a disaster. Documents released under FOI show that Pfizer first approached Australia in June 2020, but Health Minister Greg Hunt kept Pfizer waiting for weeks.

Morrison himself famously didn’t have time to call Pfizer, despite having time to make 55 calls to secure Mathias Cormann’s appointment as OECD Secretary-General. Whilst the U.S. and the UK signed deals in July 2020 for a collective 130 million doses, Australia only signed its first contract with Pfizer in November 2020 for 10 million doses. It cannot be overemphasised: Australia was given the same opportunity as the U.S. and UK to secure enough Pfizer and squandered it. And yet, Morrison had the gall to tell us we were at the front of the queue.

It wasn’t just getting enough Pfizer that Morrison failed at, he’s also failed to distribute the doses in a fair and transparent manner. On Monday, it was revealed that NSW received 45 per cent of Pfizer vaccines allocated to GPs in August, well above their 32 per cent share of Australia’s population. This diversion came primarily at the expense of Queensland, Western Australia and most of all Victoria — itself battling a Delta outbreak.

And yes, the need for vaccines may have been greatest in NSW at the time, but that need could have been met by encouraging uptake of AstraZeneca, rather than robbing Labor led states, who had been more effective and disciplined in managing Delta outbreaks, of their precious Pfizer supplies. It is Morrison’s actions that have caused other states to lag behind NSW in vaccination rates, not vaccine hesitancy as he likes to suggest. Here in Melbourne, every extra day in lockdown is because Morrison siphoned off our vaccines to Sydney.

It’s against this backdrop of colossal failures that Morrison’s Father’s Day trip must be assessed as more than just bad optics or a failure of the pub test — it was an act of contempt. We should be outraged. Morrison’s trip came at a time when families have been separated by state and international borders for months if not years with no clear end in sight because of his mistakes.

Adding insult to injury, the use of a private jet costed taxpayers over $4,000 in a single weekend when so many Australians are living on welfare payments due to widespread lockdowns which are only still necessary due to Morrison’s failures. Morrison also flew back to Sydney days later (again at a cost of over $2,000), meaning he saw fit to charge taxpayers over $4,000 so he could see his family for a weekend when he was scheduled to join them just days later. He really could have and should have just waited.

Morrison must have at least suspected that his weekend trip wouldn’t be a good look. In his Father’s Day post on Instagram, Morrison uploaded a photo of his family and specifically noted that the photo was taken earlier this year — suggesting he had spent Father’s Day separated from his family when in fact he was with them in Sydney. It’s hard to conclude that such actions could be motivated by anything other than concealment.

Shockingly, the photo Morrison shared was taken at a memorial event grieving the loss of four children who were killed by a drunk driver. Morrison did not acknowledge the children who passed away or express compassion for fathers who had lost their children. He just appropriated the photo opportunity for his own political gain. It was an appalling lack of judgment. It’s crazy that Morrison once worked in marketing — he’s so bad at it. It’s even crazier that Morrison is our Prime Minister — he’s even worse at it.

As many have pointed out, this is not the first time Morrison has shown a lack of empathy in tough times. Just months ago, Morrison snuck in a secret trip to Cornwall to find his ancestor’s gravestones (and visit local pubs) whilst in the UK for the G7 summit despite publicly arguing the UK was too risky for Australian travellers. And, of course, Morrison infamously took a family holiday to Hawaii during the height of the 2019 summer bushfires and was forced to cut that trip short in the face of a huge (and foreseeable) backlash.

It’s arguable that Morrison’s Father’s Day trip might just be the most offensive of these blunders because not only does the current crisis affect more than half of Australia’s population, but it is also entirely of Morrison’s making. It’s like he lit the fires before jetting off to Hawaii this time.

Hannah Thomas is a lawyer currently working in public policy. She has a keen interest in Australian and Malaysian politics.