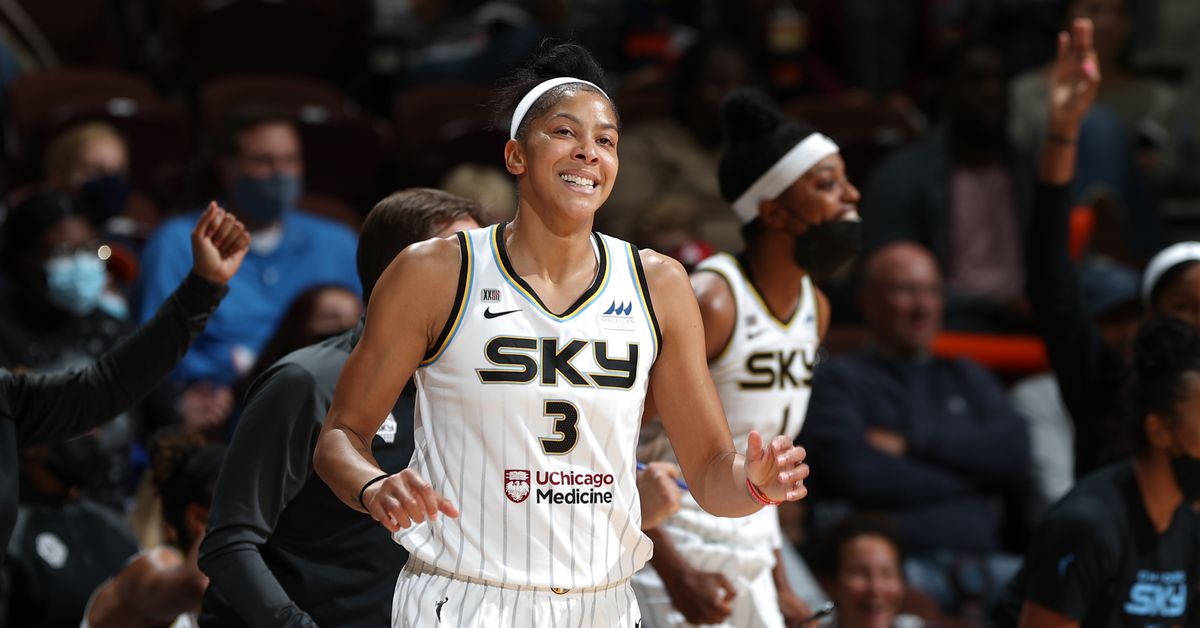 The Chicago Sky announced to the WNBA they were serious about going from a plucky upstart to a legitimate title contender when they signed living legend Candace Parker away from the Los Angeles Sparks at the start of the offseason. In adding Parker, the Sky didn’t just acquired a hometown icon (Parker grew up in suburban Naperville) and one of the most versatile players in the history of the sport. They also took on the burden of raised expectations.

When WNBA general managers were polled at the start of the year on who would win the championship, the Sky were tied for the second most popular pick after the Las Vegas Aces. While the Sky had a tantalizing mix of proven veterans and ascending talents on paper, they quickly learned how fragile contender status can be.

In their season opening win against the Washington Mystics, Parker went down with an ankle injury. The Sky had enough to win their next game against the Atlanta Dream, but the toll of losing Parker quickly set in. Chicago lost seven straight games without Parker, and didn’t break the streak until she returned three weeks later. Once it happened, the Sky couldn’t lose: they followed that seven-game losing streak with a seven-game winning streak, and showed signs of what the could team look like at its best.

It was that kind of season for the Sky, one defined by bouts of inconsistency. Chicago ended the year at 16-16 overall with the league’s No. 7 offense, No. 6 defense, and No. 6 net rating. In the 12-team WNBA, that is the definition of average.

The Sky have looked anything but average since entering the postseason, though. Chicago won two single elimination playoff games — first against the Dallas Wings, then against the favored Minnesota Lynx — to crash the semifinals. Waiting for Chicago was the league-best Connecticut Sun, a team that won the most games in the WNBA, finished with the best net rating, and also boasted the league MVP in dynamic big Jonquel Jones.

If the Sky were intimidated, you couldn’t tell from Game 1. The Sky won a double overtime thriller, 101-95, to give Connecticut only their second home loss of the season. The Sun responded by suffocating the Sky offense in the fourth quarter of Game 2 to even the series 1-1.

The Sky have their work cut out for them if they’re going to reach the WNBA Finals. Connecticut is that good. But after so much offseason hype, the Sky finally look like the team they were promised to be. With two Hall of Fame veterans, arguably the greatest shooter in the history of women’s basketball, and a pair of athletic wings flying up and down the court, the Sky are a team that’s hard to take your eyes off of. Here’s what makes them so much fun to watch.

Courtney Vandersloot is the Point Goddess

Courtney Vandersloot has a case as being one of the greatest point guards in the history of women’s basketball. If you think that sounds overly ambitious, just check the numbers.

Vandersloot has spent her entire WNBA career with the Sky after being taken No. 3 overall in the 2011 draft. She finished her college days at Gonzaga at No. 3 all-time in total assists. Now 32 years old, Vandersloot only seems to be getting better every year. She’s led the WNBA in assists five straight years, and is routinely putting up almost 100 more assists than her closest competition. She averages the most assists per game in league history by almost a full assist of No. 2 Ticha Penicheiro.

Game 1 against the Sun was Sloot at her best: 12 points, 18 assists, 10 rebounds, four steals, and two blocks in 44 minutes. It was only the second triple-double ever in the WNBA playoffs.

The greatest point guards seem to have a gift to pass their teammates open — not just pass to open teammates. Vandersloot has it. She sees the game two steps ahead of anyone else on the court. Having another basketball genius in Parker on her team has created some beautiful moments of symmetry all year.

This might have been the best of her 18 dimes with the Sky needing every bucket in overtime.

The Sky posted the third highest assist percentage in league history this season, and Vandersloot’s imprint is all over that number. She has total control over every possession and a true gift for getting her teammates the ball in position to score. To watch her as a floor general is to see a master at work.

Candace Parker still has it

Parker has been a phenom since she entered the basketball world. She won the dunk contest at the 2004 McDonald’s All-American Game. She finished her career at Tennessee with two national titles, two Wooden Awards, and one very memorable dunk. She was the first pick in the 2008 WNBA Draft and won Rookie of the Year and MVP in the same season — something only Wilt Chamberlain and Wes Unseld can say. She won another MVP in 2013, and her first WNBA championship with the Sparks in 2016. There’s also her two gold medals, her nine All-WNBA team selections, and her Defensive Player of the Year Award in 2020.

I think you get the picture: Parker is an icon in the game, and will be a Hall of Fame inductee as soon as her career is over. Now at 35 years old, she’s showing she still has a lot left in the tank.

At 6’4, Parker is the total package on the floor. She can handle like a guard.

How many players in the history of the game can block a shot like this and immediately throw an incredible outlet pass the way Parker did in the first game of the season against the Mystics?

Parker is still so dynamic even late in her career. It’s not just her historic combination of size and skill that makes her so effective — she’s also one of the great basketball minds around.

Without Parker this season, the Sky struggled to win a game. With her, they’re going toe-to-toe with the league’s best team in the semifinals. Appreciate her while you still can.

Allie Quigley is a knockdown shooter off any action

Quigley is another Chicagoland legend who played her high school ball at Joliet Catholic and her college ball at DePaul. She’s a long-time staple on the Sky, and like her wife Vandersloot, she also seems to be getting better with age.

Now 35 years old, Quigley is a three-time All-Star (2017-2019) and two-time Sixth Woman of the Year. She’s also one of the best shooters in league history. She has three Three-Point Shootout titles to her name, and wowed fans with her run in the event in 2018.

Like so many of the greatest shooters ever, Quigley is extra difficult to contain because of her ability to off motion. The Sky run her in an endless loop of actions to free her from three, and she’s able to hit with just a tiny bit of daylight.

Watch how quickly she gets the shot up coming off this pindown:

Allie Quigley’s just so quick to her shot. She’s being denied under the basket, so she escapes and gets a pindown, which is all the space she needs to launch the 3. pic.twitter.com/UMTSHF6C6K

All Quigley did in her age-35 season is hit 45.4 percent of her threes on 4.6 attempts per game. Playing off two historic passers this season has made Quigley even more dangerous.

Diamond DeShields and Kahleah Copper add athleticism on the wing

The Sky are led by their three veteran stars, but it’s a pair of younger players on the wings who give the team an added boost of defense, athleticism, and on-ball juice.

Kahleah Copper came to the Sky in the Elena Delle Donne trade. After being a bench player in her first three years, Copper made a star turn in the bubble by more than doubling her scoring average. This season, she earned her first All-Star team selection, and led the team in scoring.

Copper is a 6’1 wing who can pressure the ball defensively, and fearlessly slash to the basket on offense. Her jaunts to the lane have been incredibly fun to watch all season.

As Copper has ascended, Diamond DeShields has taken a small step back. There was a time when DeShields looked like a future star — now she’s coming off the bench where she injects energy into any lineup.

At her best, DeShields can fly all over the floor and make highlight reel plays on both ends. There aren’t many wings in the league effortlessly elevating for a block like this:

Just look at the explosion on this drive:

DeShields isn’t always the most efficient scorer, but when she’s on top of her game, the Sky are the best version of themselves. On a team with such a solid veteran foundation, it’s Copper and DeShields that have the potential to take the Sky to the next level.

For as talented as the Sky are, Connecticut can be even better

Jonquel Jones is a dominant offensive player in the middle who can bully her way to points inside, stretch the floor with her jumper, and attack the glass for tip-ins and put-backs. Alyssa Thomas is a physical force and somehow seems to be back at the peak of her powers after tearing her Achilles in January. Brionna Jones is a load as an interior scorer, and DeWanna Bonner is a 6’4 wing who can score from all three levels. It’s no fluke the Sun were the best team this season.

Sun vs. Sky is a wonderful stylistic clash with great players all over the floor. It was a winding road to get here for Chicago, but this is the team the Sky thought they had all year long.