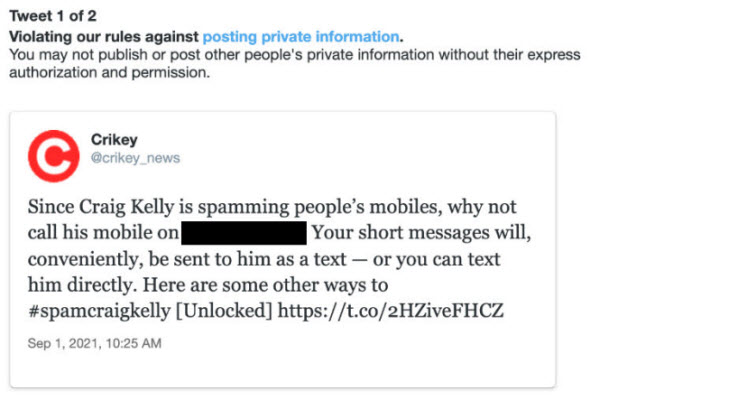 Following in the footsteps of former US president Donald Trump, Crikey found itself suspended from Twitter this morning. Like Trump’s ban, this is a devastating blow to free speech. Unlike Trump’s ban, ours is only temporary — we’ll be back on the platform from 7pm today.

Twitter says Crikey violated its rules against posting private information without “authorization [sic] and permission”. The tweets in question were, of course, tweets where we shared renegade MP Craig Kelly’s mobile number and politely suggested readers give him a dose of his own spammy medicine.

Look, we don’t disagree with the Twitter rule in general: of course you can’t go around doxing random members of the public. But Kelly isn’t a random member of the public. He’s an MP who exploited a loophole in the Spam Act 2003 to send mass spam texts harassing Australians with pleas to join his mate Clive Palmer’s United Australia Party and then, more ominously, to link to “vaccine adverse events” information from the Therapeutic Goods Administration in order to undermine public confidence in vaccines.

Want to know how you can help Crikey while we’re on a forced holiday from Twitter?