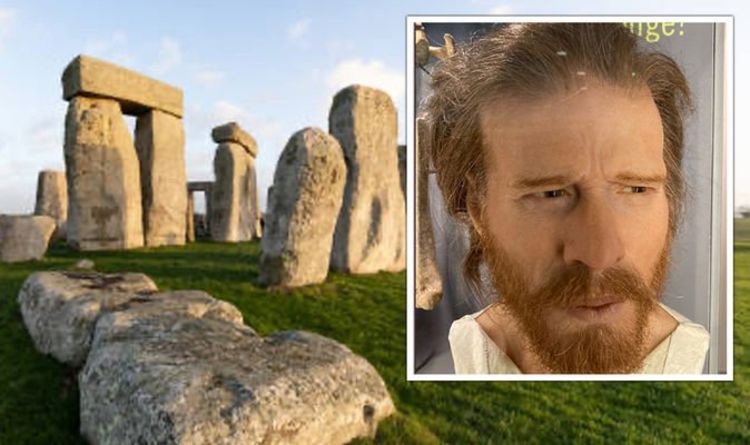 It is said to be the most advanced reconstruction of a Neolithic man’s face ever, and it tells the story of the area before Stonehenge was even created. Forensic evidence has shown that the man was between 25 – 40 years old, was a slender build and was born around 5,500 years ago. This was about 500 years before the circular ditch and banks at Stonehenge were built.

The incredible image was shared on Twitter by archaeologists Alison Fisk, but some users were not impressed, claiming that was inaccurate and a bad portrayal of what a Neolithic man would have looked like.

“Your genetic hypothesis is unsupported by the bulk of available evidence.

“Of course, we’ll never know for sure but I think you’d need contradicting evidence from the time period and there isn’t”

Another said: “Surprisingly white considering the gene variant SLC45A2 didn’t elevate to a noticeable degree until 5800 years ago – brings into question the reconstruction builders bias.”

And they were not alone in their frustration.

Another user commented on the post: “His beard and hair would have been lighter and thicker to survive the cold. His eyes would likely be lighter to reflect snow glare.”

One user wrote: “Snow glare? He lived in the UK, not the tundra! And as someone with light blue eye colouring, it doesn’t help with glares, snow or not! As for the thickness of hair, he could also have been bald.”

It appears, for now, no one can quite agree what the man should have exactly looked like, which seems fair given he lived 5,500 years ago.

The reconstructed face went on display at the English Heritage Stonehenge Visitor Centre back in 2014.

The exhibition also had 250 objects on display that were used in Stonehenge’s construction and those connected with Neolithic and Bronze Age men and women, their lives, rituals and practices.

The important objects had never been seen together before and they told the story of the changing understanding of Stonehenge over centuries.

The exhibition was part of the first phase of English Heritage’s £27million project to transform the visitor experience of the iconic site, made possible by a £10million grant from the Heritage Lottery Fund (HLF) and substantial gifts from the Garfield Weston Foundation, the Linbury Trust and the Wolfson Foundation.

Bettany Hughes, award-winning author, historian and broadcaster, said: “I have no doubt that those who first constructed Stonehenge did so with awe and with a profound appreciation of the beauty and power of the world around.

“For millennia men and women have travelled to the site to try to share that experience.

“Now in the 21st century with the help of these developments, we can appreciate both the intriguing story of the site – and its mystery.”