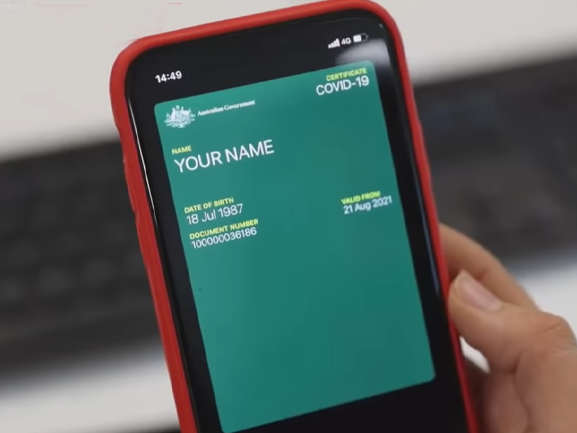 Fake vaccine passports are becoming big business but while the forgeries are good, there are easy ways to spot the counterfeits, writes Tom Tanuki.

I’D HEARD ABOUT fake vaccine passports. But I was surprised when my friend Marie contacted me to ask if I’d seen a site where I could make one on my own. (I was even more surprised when she revealed that she needed to use the service for completely the opposite purpose it was made for. Read on.)

I had already seen fake passports on offer via communications platform Telegram and covered in Australian media over the past month. It’s an inevitable consequence of the combination of encroaching work/travel mandates and a stubborn anti-vax contingent constantly scheming online.

There’s been lots of coverage on the matter but to date, I’d only seen it covered as a paid service locally. From $50 to $500 (and I suspect a lot more if the right dupe is found), people have been offering to generate fake Medicare certificates that you can store on your phone to show anyone checking. They seemed pretty shoddy initially, but the quality is improving.

Now anti-vax “altruists” appear to be opening up the service for free. Once Marie sent me the link I tried it, but by the time I did – stored as it was on a free Neocities domain – it had been removed. Apparently in the past 24 hours, at least two of these sites have appeared and been scrubbed. So, someone’s clearly onto it. More are springing up, though.

How did Marie first come across the site?

She asked him where he found them and then headed in herself. Although I was too late to experiment myself, Marie had thankfully recorded her experience and she showed me how it works.

Firstly, the site takes you to a form for completion. ‘Welcome to the Medicare vaccine pass generator,’ it says. It asks you to fill out all the details that a real certificate would require.

When you complete the form, a fake vaccination certificate pops up. You then have the opportunity to save that certificate to Apple Wallet. (I didn’t get to test this on Android but I assume a similar function might exist for Google Pay.)

Doing that saves a link on the phone’s menu, called – of course – ‘Medicare’.

One: a real Medicare app displays a top menu that you have to click through to display your passport. The fake one accesses the fake certificate immediately.

Two: the real passport uses the gyroscope feature on Marie’s phone, so the Australian Government logo in the background shines with a holographic sheen and moves about as she moves her phone around, just like how a government logo might shimmer as you rotate a real ID card around.

These tells are going to be difficult to locate time and again for busy border checkpoint staff, flight attendants, security and venue staff. But they’re obvious if you know what you’re looking for — particularly the latter one, which simply requires that people tilt their phone a little.

We’re at what feels like the business end of the pandemic for anti-vaxxers. They aren’t just scheming with fake vaccine certificates, here and abroad. They are getting serious — and confrontational. COVID-19 testing centres are being vandalised, even burned down. People with masks are being attacked in the street.

The mandates themselves promise to be the focal point of increasingly shrill, violent protests here, in America and around the world. The medical libertarianism of the anti-vaxxers is sharpening and being pointed at the rest of the community.

Marie is smart and has good politics. We talk a fair bit and I know her to not be an anti-vaxxer.

So I asked: Did anything, aside from casual interest, spur her to try out the fake certificate site?

‘I honestly just made one of curiosity, to compare it to my real vaccine passport. Then had the lightbulb moment: I could use it as a way to fool my Q-pilled family into thinking I tricked my way into getting into a different state.’

I’m falling off my chair over this upside-down hellworld turn of events. While I am aware that Marie’s family has among it a number of red-pilled people – we’ve been talking about it for a long time – learning that a fully vaccinated person feels pressured into using an anti-vax fake passport service to pretend to anti-vaxxers that they are not vaccinated is something else. It speaks volumes of the increasingly confrontational tone of anti-vaxxers, even among their own families.

Apparently, the fake passport Marie made has successfully fooled her family. (At least the sites have been good for something.) We need to ensure they can’t fool the people responsible for safeguarding our collective health and safety in the coming months and years.