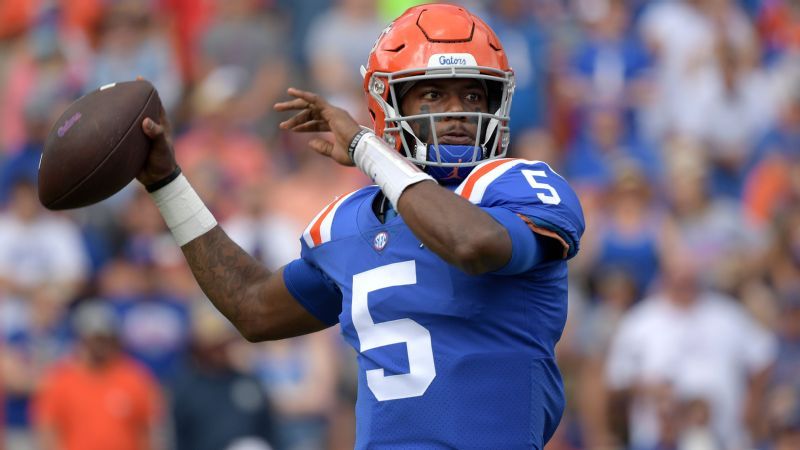 It was a feel-good victory for the Gators on homecoming after a gut-wrenching loss at Kentucky essentially knocked coach Dan Mullen’s team out of contention in the Southeastern Conference’s Eastern Division.

Jones was the star of this one. He completed 14 of 22 passes for 273 yards, with TD passes to Ja’Quavion Fraziars, Trent Whittemore, Dameon Pierce and Jacob Copeland. Pierce also scored twice more on short runs.

Richardson played sparingly for the second straight week. His first pass was intercepted. He returned the following series but ended up giving way to Jones until getting back on the field for mop-up duty in the fourth quarter.

Vanderbilt had several chances to make it more competitive, but Alabama transfer Joseph Bulovas missed three field goals. He was errant from 39, 41 and 33 yards out. The Commodores also had a touchdown overturned when Chris Pierce failed to maintain possession on a fourth-down catch when he hit the ground in the second quarter.

Vanderbilt: First-year head coach Chris Lea has a rebuilding project on his hands, but he surely can draw plenty of positives from this loss. The Commodores ran 80 plays and were 8 of 20 on third down.

Florida: Mullen wasn’t pleased with his team’s first-half performance. The Gators led 21-0, but it could have been 21-13. He got his team going with a fake punt on the fourth play of the third quarter.

Florida is the only two-loss team in The Associated Press college football poll. The Gators are unlikely to move up much, if at all, following a lackluster home victory against an overmatched team.

The Gators played their third consecutive game without preseason all-SEC cornerback Kaiir Elam, who is recovering from a sprained right knee. The unit got even thinner in the first quarter Saturday when Tre’Vez Johnson was ejected for targeting.

Johnson’s dismissal left the Gators without their top three cornerbacks: Elam, Johnson and Jaydon Hill, who tore a knee ligament in training camp and is out for the season.

But none of the Olympians brought their medals to the Swamp.

“Noooo, too much anxiety with bringing those into this environment,” Hinds said. “Oh my God, it’s like my child.”

Tim Tebow and Billy Donovan are finally in Florida’s Hall of Fame. Tebow, the 2007 Heisman Trophy-winning quarterback, and Donovan, the most accomplished men’s basketball coach in school history, were inducted Friday night as part of the 2020 class. The ceremony was delayed a year because of COVID-19.

The nine were recognized on the field at the end of the first quarter Saturday. Tebow and Donovan were unable to attend.

Vanderbilt plays at South Carolina next Saturday. The Commodores have lost 12 straight in the series.

Florida plays at LSU next Saturday. The Gators have dropped four of five in Baton Rouge.