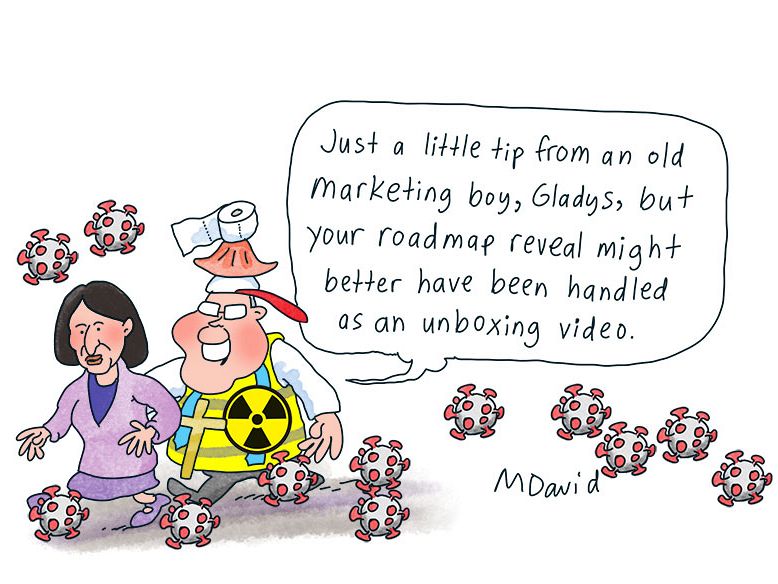 Prime Minister Morrison addresses the nation with something really important to announce.

MORRISON: The recent news out of New South Wales, I don’t mind telling you, has come as quite a shock and a bit of a wake-up call, that anything can happen at any time, to any one of us. That’s why we need to have a plan to help navigate through any situation.

My personal plan, whenever I find myself flaying around in the dark, is to turn to Jen. Never let me down that woman, this wife of mine.

Her words: “Scott. One door closes — another door opens.”

How good is that! It was so good everything made sense again. Hence, I am now able to announce that next week my Government, the Morrison Government, will establish a Federal ICAC to find, root out and punish those guilty of corruption.

With great, immense and profound pleasure, I announce today the Federal ICAC shall be headed by the very capable, honest, diligent, decent and trustworthy Gladys Berejiklian. How good will Gladys be at recognising and rooting out corrupt activity? Very good.

Gladys Berejiklian enters the room and walks to the lectern. Prime Minister Morrison steps away to give Gladys space to address the nation.

GLADYS: I must thank you, Prime Minister, for giving me this opportunity to continue my passion for working for the public, something I feel I was born to do. I am sure it comes as no surprise to hear I have a lot more time on my hands. No more 11 am press conferences. No more COVID numbers or open or closed LGA’s to contend with. No more worrying about what my paramours may or may not get up to.

The first thing I wish to address once this Federal ICAC is established is the false belief that Prime Minister Morrison is just the Prime Minister for New South Wales. To highlight the Morrison Government is truly our national Government, the Federal ICAC will initially concentrate – at least for the duration of the Victorian Andrews’ Labor Government – on political corruption emanating from Labor’s federal Victorian parliamentarians.

Complementing this, to further highlight Prime Minister Morrison’s credentials as the Prime Minister of Victoria, the new Federal ICAC will also investigate – and investigate forensically – any questionable behaviour perpetrated by any Victorian State Government member.

Prime Minister Morrison eases future Commissioner Berejiklian to one side.

MORRISON: If I may have your indulgence for a minute, Gladys. In particular, we will look for any signs of malfeasance in regard to the cancellation of the East West Link contract by the Andrews’ Government. Reneging on a government contract is a disgusting, negative act and only serves to diminish trust, respect for, and the reputation of, the party cancelling said agreement. Such activity must stop, cease immediately. Back to you, Gladys.

BEREJIKLIAN: Thank you, Prime Minister. In particular, I am concerned with the forests of documents government departments shred. Once our corruption commission is up and running, I shall release an edict demanding all documents – earmarked to be shredded – are to be sent to the commission’s headquarters, where they shall be examined for any possible wrongdoing.

Unlike the New South Wales ICAC, which appears obsessed with shooting down LNP premiers as if we were clay ducks in Wagga Wagga, this Federal ICAC will focus on dodgy Labor politicians.

That should do it for now and I thank you for respecting this press conference.

MORRISON: Thank you, Gladys, soon to be Commissioner, Berejiklian. I must get back to work now; I have to prepare to plan a new plan for announcement tomorrow.

Rocky Dabscheck is a musician/songwriter and front person for Rocky and The Two Bob Millionaires. He is also the author of ‘Stoney Broke and the Hi-Spenders‘.