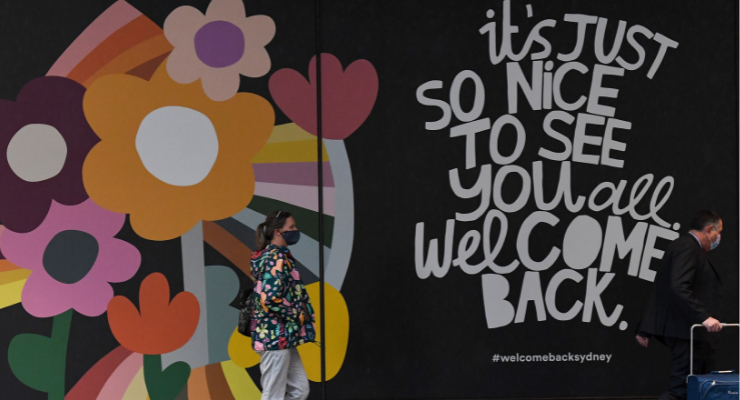 PULLING OUT ALL THE SHOPS

Shaggy mops have been cut and frothy beers have been downed as Sydneysiders emerged from 106 days of lockdown yesterday. The fully vaccinated can share meals in cafes, go to the cinema, and welcome up to 10 guests in their home, as The Australian ($) explains, while pools and gyms reopened and hairdressers and beauty parlours started trading again. People even formed long queues at 24-hour Kmarts to get their shopping fix, The New Daily adds.

The next key date is October 25, when 80% of the state’s 16+ population are on track to be fully vaxxed, the SMH reports. That will see regional travel return, nightclubs open (without dancing), and places of worship open for everyone. Wondering what to do with yourself? The SMH has a great guide, from movies to museums, festivals, and theatre.

Meanwhile, Victoria is set to reach its 70% vaccination milestone on October 26 which will trigger the reopening of hairdressers and restaurants — to the fully vaccinated, that is. The ABC has an excellent explainer that breaks down what you need to know about proof of vaccination. Once 80% are fully inoculated, Victorian nightclubs, gyms, and retail stores will throw their doors open, though some restrictions (like capacity) will remain, the Victorian roadmap says.

SEEING THE FOREST FOR THE TREES

Unlike the UK, the US, and Canada, Australia has still not committed to protect 30% of our land and sea, according to WWF Australia’s Rachel Lowry. That’s despite our government purporting to back the same international target — a clear “double standard”, Lowry reckons. Her comments come in light of a a new WWF report that found about 1500 of our unique ecosystems remain unprotected, Guardian Australia reports, while around 10% of our nationally significant species have no protection either.

Meanwhile the Federal Environment Minister Sussan Ley will appear at the UN biodiversity conference this week to sign a statement to halt the destruction of nature, the SMH reports. The summit — known as “the other COP” in comparison to Glasgow talks — will replace 2010 targets which were mostly unmet by countries, including us. Indeed since 2000, Australia has cleared 7.2 million hectares of threatened species habitat — mostly for agricultural use.

Margaret Renkl writes rather beautifully for The New York Times this morning that the “biodiversity crisis will not be solved by hyperlocal efforts to save a particular species, or to preserve a particular stretch of forest” but rather people coming together across political divides to “save what they love”.

STACKS ON, STACKS OFF

The Victorian ALP has been rocked by a federal MP’s revelations of branch-stacking, ghost staffing, and knowledge of rigged party ballots, The Australian ($) reports, after the IBAC claimed its fourth scalp in Victoria. Child Protection Minister Luke Donnellan has quit cabinet after his colleague Anthony Byrne spoke of factional rorting in preselections and internal party ballots in Victoria — a “political suicide mission”, the Herald Sun ($) says. It’s actually the eighth time in seven years an Andrews government minister has resigned amid a scandal, The Age reports.

So what does it all mean? Well, branch-stacking is a term used when people like politicians, candidates, and factional operatives pay membership fees for people, The Age explains. Then those members are expected to vote to support those candidates in preselection. It’s not technically illegal — but it is against Labor Party rules. The IBAC — the corruption watchdog in Victoria — got involved because the branch-stacking might have involved taxpayer funds.

Marcus Aurelius once wrote that, if one has trouble rising from bed, it is helpful to think: “I have to go to work — as a human being”. He says we are not created to huddle under the blankets. “Don’t you see the plants, the birds, the ants and spiders and bees going about their individual tasks, putting the world in order, as best they can? … Why aren’t you running to do what your nature demands?”

This time last year, like a lot of folks, British physical instructor Chris Reeves was struggling with isolation, as The Guardian writes. So he started Win the Morning, Win the Day. It’s not a workout group or some demanding physical challenge. It’s just a group walk, and maybe a swim, at dawn.

Reeves says more than 60 people turned up after one week — and a year on, groups have popped up across the UK. The simple idea has seen homebodies break their habits and some even quit drinking to be fresh for their walks, Reeves says. But the idea isn’t to optimise your productivity or cram more into your day — it’s to have a conversation and start the day on a brighter note. “I’m not forcing people to be friendly, and to be nice and positive,” Reeves explains. “That’s just what we’ve attracted.”

I don’t care what they call it … They can call it what they like. These things [were] hard fought for. Nationals brought these policies ahead because we got sick of being left behind.

The deputy PM says it drives him “insane” that funding infrastructure in Sydney is fine but once “you cross over the Hawkesbury … it’s pork-barrelling”. It comes as almost 90% of regional grants worth $300 million were spent in Coalition and marginal seats, according to analysis. Granted the Coalition do hold more regional seats — but even so, Labor says, on a proportional basis no more than 60% should’ve gone their way. Shadow infrastructure minister Catherine King called it the latest in a string of Morrison–Joyce rorts.

“Unlike many other countries (or even the ACT), Australia’s goals are centred around those aged over 16 who have been vaccinated. Other nations take into account the whole of the population, including children or those aged over 12 deemed eligible for the vaccine. Taking into account the whole population, our 80% vaccination target drops to 64% — a goal experts have warned is too low to achieve herd immunity …

“Regional Queensland has some of the lowest vaccination rates in Australia, with just a third of residents fully vaccinated. Despite initially being a priority for vaccines, around a quarter of people with disabilities living in shared accommodation remain unprotected. The disability royal commission found those in group homes had been deprioritised in the rollout as the focus shifted to residential aged care facilities.”

“What he didn’t note was that his nemesis Malcolm Turnbull attended the same forum last year, apparently relaxed about ‘provoking China’. Of course, being in the middle of the pandemic, Turnbull’s attendance was virtual, and his speech was a little more coded than Abbott’s (not to mention much better).

“But Turnbull wasn’t particularly evasive in his references to China’s interference in Australia and his response (including the foreign influence laws), the need to ensure ‘we don’t move into a world where might is right’, and his conclusion ‘the rule of law and mutual respect are the keys and that’s why we must work together in the region as a mesh of countries with shared values to protect our sovereignty’.”

“If that all sounds a little vague to you, you’d be correct. The ‘buy Australian’ plan is the latest low-key offering in Labor’s small-target, slogan-heavy election strategy. Chastened by their shock 2019 defeat, where a large and sometimes cumbersome agenda opened up ample lines of attack for Scott Morrison, the opposition have opted for a strategy of policy restraint.

“Albanese’s vaguely protectionist list of policies is relatively low-risk because, as independent economist Saul Eslake suggests, there’s a generally bipartisan ‘manufacturing fetishism’ in Australia — one which sees building things domestically as inherently virtuous even when it doesn’t always make economic sense to do so.”

Can your career help change the world? You have 80,000 hours to try. (The Wall Street Journal)

Bashar al-Assad steps in from the cold, but Syria is still shattered (The New York Times)

Scientists looked at more than 100,000 studies and found the world has a giant climate-crisis blind spot (CNN)

Average citizens might not ‘volunteer’ for death if they could afford what the rich can: staying alive with dignity — John Watkins (The SMH): “You’ve probably never heard of intrathecal care. It’s a new drug-delivery method used by palliative care specialists in which a catheter is inserted near the spinal cord, similar to an epidural. It enables pain relief while allowing mobility and lucidity … When most of us think of palliative care, we picture a nurse increasing the morphine dose until a bed-bound patient slips into a barely responsive state. But modern pain treatment, administered by palliative care specialists, doesn’t just manage psycho-existential suffering — it extends life.

“So why is this relevant to the left-right debate? Because only a tiny fraction of our population has access to this modern palliative care. If you are among the privileged few who are very wealthy, live in the right area, or have great health insurance, you can get access to life-extending modern palliative treatments. With them, you can likely make the most of almost every day that modern medicine enables you to have. You can use that time to connect meaningfully with family and friends, do the things you love, arrange your affairs and plan your legacy.”

While Coalition dithers on climate, world moves ahead — Troy Bramston (The Australian) ($): “From cabinet room to party room, boardroom and environmental lobby, Australia has been served poorly when it comes to dealing with climate change. This policy debate has been beset by wild claims and denialism, and weaponised for political purposes while our inter­national reputation has diminished … It is easy to attack the Morrison government on climate change. But the truth is that Liberals, Nationals, Labor, Greens and One Nation have repeatedly failed to act or backflipped on their policies …

“Climate change is probably the greatest collective failure across the political spectrum in Australian history. We need to continue to facilitate the take-up of renewables (solar and wind) and boost battery storage, support hydro-electricity and invest in hydrogen and natural gas as transitional energy sources. We should consider nuclear power, too. It is beyond time that the climate wars ended.”