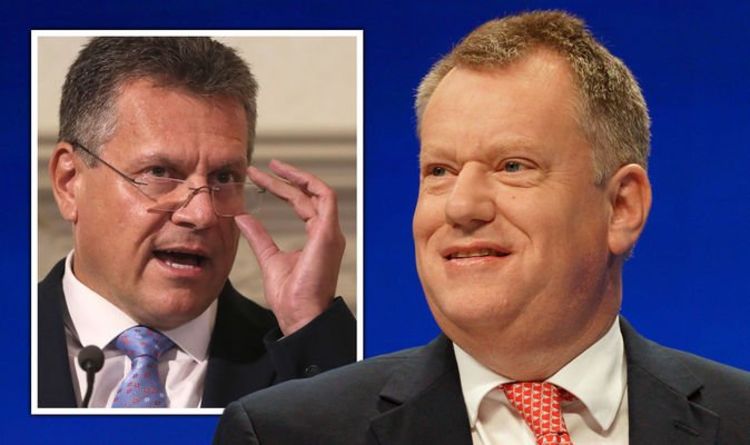 Jayne Adye was speaking after the Brexit minister’s landmark speech in Lisbon today, in which he suggested he was ready to use the so-called nuclear option, which would suspend the controversial mechanism, suggesting it was “not working”, having “completely lost consent in one community in Northern Ireland”. Nevertheless, he held back from actually doing so, something Ms Adye, director of pro-Brexit campaign group Get Britain Out believes he should do without delay.

It is clear playing ‘nice’ with the EU has not worked

Speaking in advance of a scheduled appearance by the European Commissioner who is Lord Frost’s opposite number, Ms Adye said: “While there is a need to see what the EU Commission Vice-President, Maros Sefcovic, says in his speech tomorrow, if there is not an acceptance of the realities discussed by Lord Frost, then we should not waste more time before triggering Article 16 of the Northern Ireland Protocol.

“This speech from Lord Frost was a very welcome start to pushing back against the aggressive behaviour of the EU in the last few years.

“It is clear playing ‘nice’ with the EU has not worked and his firm words will not go unnoticed.”

Protesters against the Northern Ireland Protocol in Belfast (Image: GETTY)

Ms Adye explained: “The Northern Ireland Protocol is an insult to UK Sovereignty and has no support from Unionists in Northern Ireland – support which is supposed to be required for the basic operation of the Protocol because of its connection to the Good Friday Agreement.”

During his speech, Lord Frost had set out a number of areas in which the UK will diverge from the EU in future, Ms Adye acknowledged – but warned such diversion was “taking too long”.

She added: “As with many of the Government’s other promises, speeches are made with grand announcements, but the action to deliver on the words never seems to arrive!

“The EU cannot claim the Protocol is set in stone, when the document specifically states otherwise.

“To try and reject changes would only confirm the EU’s total disregard for finding a mutually agreeable solutions, preferring instead to do all they can to try and divide the UK as a punishment for Brexit.

“It is not the UK Government’s fault the EU made agreements with Prime Minister Boris Johnson at the last second, assuming he would not be re-elected to Government with a massive majority.

“Any new Government with a strong mandate from their electorate – as Boris Johnson achieved – is entitled to make changes to international agreements.

“Perhaps if the EU wanted a more malleable opponent for the future, they should not have run down the clock on Theresa May!

“We cannot continue endlessly extending talks and kicking the can down the road.

“Until action is taken, businesses and people in Northern Ireland will remain under the control of the EU – and in a perpetual state of uncertainty – a situation which no UK Government can allow.”

Speaking earlier, Lord Frost described the Protocol as “the biggest source of mistrust” between London and Brussels.

He claimed: The Protocol is not working. It has completely lost consent in one community in Northern Ireland.

The Unionist community is implacably opposed to the Northern Ireland Protocol (Image: GETTY)

“It is not doing the thing it was set up to do – protect the Belfast (Good Friday) Agreement. In fact it is doing the opposite. It has to change.”

He added: “Northern Ireland is not EU territory. It is our responsibility to safeguard peace and prosperity in Northern Ireland, and that may include using Article 16 if necessary. We would not go down this road gratuitously or with any particular pleasure.

“But, as Burke famously commented in his pamphlet “there is however a limit at which forbearance ceases to be a virtue”.

“It is our fundamental responsibility to safeguard peace and prosperity in Northern Ireland, and that is why we cannot rest until the situation has been addressed.”