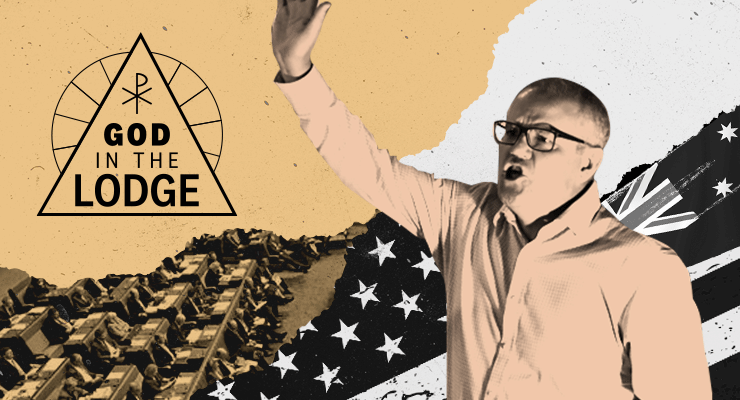 This is part one of the new series God in The Lodge.

Scott Morrison’s prime ministership represents a paradigm shift in Australian politics, and it’s a shift that has been discombobulating for journalists, commentators and others in the political sphere. Morrison is surely the first resident of the Lodge to say that God has sent him a message through a painting of a soaring eagle — and believe the literal truth of that.

The PM’s way of doing business does not fit with the conventional rules of engagement. It forces us to look for another way to interpret Morrison the politician. After eight years in government — three in the top job — Morrison’s record shows that he is the most anti-democratic prime minister we have known.

How so? Well, he is addicted to secrecy. It started with his “on-water matters” ruse to avoid questions as immigration minister and it persists with his attempts to enforce confidentiality on national cabinet operations.

Morrison detests independent processes. The list is as long as your arm, from stacking independent authorities with political friends, to a disdain for the Australian National Audit Office, to placing his trusted department head Phil Gaetjens in charge of ministerial inquiries.

Morrison fails to enforce standards of behaviour: Angus Taylor, Matt Canavan, George Christensen; the return of Bridget McKenzie; the conduct of his own office in the case of Brittany Higgins.

He tells lies and shifts positions. As Crikey has documented, he does this with impunity and no sense of shame.

He is opposed to outside accountability. There is no meaningful prospect of a federal ICAC, freedom of information is rendered ineffective and his media strategy is carefully honed to avoid rigorous questioning.

Morrison, in other words, has been party to the destruction of the very processes which define a healthy democratic government. What remains is the appearance of democracy via elections every three years — something he has shown to be very good at.

On one level Morrison can be understood as another opportunistic politician who knows he can get away with it. Yet there is another set of facts which explains his actions, at least in part, and that is that he sees himself as truly accountable only to God.

There is ample evidence that Morrison and those around him consider him to have been chosen by God — dating back to before he entered Parliament in 2007. There is strong evidence, too, that he sees divine intervention when it comes to key moments in his personal and political life. There was the “miracle” birth of the Morrisons’ first daughter. The “miracle” of his 2019 election win. The sudden appearance of a painting of a soaring eagle as a direct message from God on the election trail.

These convictions are unusual in an Australian political leader. They are also very real — even if they sound outlandish to non-believers.

Morrison asks us to believe that he can separate his strongly held belief in the power of the supernatural from how he governs. But this is a very different Morrison from the one who presented himself to his wider Pentecostal family at the Australian Christian Churches conference in April. There he was the man who was in power “for such a time as this” — a biblical phrase from the Old Testament‘s Book of Esther, which he repeated over and over. The phrase invokes courage and hope among believers with its reference to the one defining moment when it is possible to make a difference.

(The full sentence from the Book of Esther is, “And who knows but that you have come to your royal position for such a time as this?” It has special resonance on the Christian right, where it evokes the idea of individuals chosen by God as “divine agents” to advance his plans, and goes to building a picture of divine anointing.)

Morrison’s refusal to be transparent invites speculation about what drives his decisions. He is annoyed when people speculate that religion might influence his actions, and more than once has said belief is a matter between him and God. But then he refuses to play ball by opening up the facts for interrogation.

There are examples big and small of Morrison’s actions which may be underpinned by his faith. Why doesn’t he publicly pull Coalition MP George Christensen into line — and perhaps insist he stand down — when Christensen makes dangerous statements about COVID-19? There’s always an excuse not to act: Christensen is a National, not a Liberal. But Christensen is also a fervent Christian and a key contributor (with Canavan) to an organisation known as Church and State which has the mission of blurring the lines between the two.

Why does Morrison praise and promote Queensland MP Stuart Robert despite his dismal ministerial record? Is it because he has to give a Queenslander a spot in cabinet? Or is it because Robert is a Pentecostal pastor?

On a bigger stage, why doesn’t Morrison “get it” — in 2021 — about violence against women? Is it because he’s a bit of a daggy dad who goes to the footy? Or is it because his religion formalises strict gender roles and casts women as temptresses?

Internationally, why did Morrison blindside everyone with two major foreign affairs interventions with major consequences? One was the sudden announcement, on the eve of a 2018 byelection for the seat of Wentworth, that Australia might shift its embassy in Israel from Tel Aviv to Jerusalem, breaking with decades of careful Middle East diplomacy. The other was to go out loudly with a demand that China be subjected to an international inquiry into the origins of COVID-19.

On one level both calls played, opportunistically, to domestic politics: playing to the Jewish vote in Wentworth on the one hand, and pandering to a growing anti-China sentiment in Australia on the other.

Yet both positions are also in lockstep with the policies of former US secretary of state Mike Pompeo, who is also a fervent evangelical Christian. The idea of Jerusalem as the capital of Israel is a core driver for evangelical Christians convinced that an end-of-days event is set to occur.

Coincidentally, Pompeo has also invoked the biblical phrase “for such a time as this” to justify unconventional US policy moves on Israel under Trump. Pompeo led the congratulations for Morrison’s China moves. He also framed the conflict in religious terms, calling China the greatest threat in the world to religious freedom.

And finally there is Morrison’s remarkable assertion that he secretly used physical contact with Australian bushfire victims to practice the “laying on of hands”, a way of healing by invoking the holy spirit. It demonstrates that Morrison will quietly do God’s work in the guise of a separate, discrete action.

We know that Morrison governs Australia. But there is no simple answer to the question of who — or what — governs Morrison. In Crikey‘s new series God in The Lodge, we will explore this through investigative pieces and analysis, including from five of Australia’s best writers on politics and religion.

Next — The good word: a compendium of Scott Morrison’s godly quotes