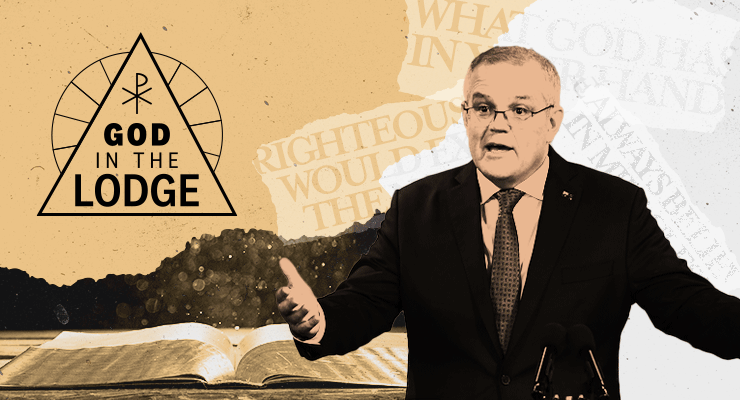 This is part two of God in The Lodge. Read part one here.

Both during and prior to Scott Morrison’s time in the spotlight, he and those around him have made a number of statements referencing the influence God — and the supernatural — has had on him, covering some of the most significant moments of his political life.

Here is a selection:

Joel, I really feel like this is what the Lord wants … He wants me to become prime minister.

As retold in 2021 by Joel A’Bell, former Hillsong pastor and friend of Morrison, recalling a conversation with Morrison circa 2006.

My wife … believed [Morrison] was called by God to replace me.

Use what God has put in your hand.

Morrison recalling the advice he received from Hillsong Pastor Brian Houston well before he entered parliament. The phrase refers to the rod God placed in Moses’ hand as a symbol of God’s presence and power.

Righteousness would exalt the nation.

Morrison and his fellow Pentecostal and close friend Stuart Robert prayed that “righteousness would exalt the nation” in the minutes before Morrison was made prime minister in August 2018 by the Liberal party room, as revealed in Niki Savva’s book Plots and Prayers. Savva wrote that Morrison had also asked his receptionist to text his wife, Jenny, to ask that his family pray for him as he headed into a prayer session with Robert.

Morrison on the night of his May 2019 federal election win.

Morrison also recalled the coming together of the numbers and the 14 years of failed IVF treatment in an interview with Annabel Crabb in 2015:

Morrison: “Abbie was born on the seventh of the seventh 2007. I don’t think that was by accident and it was a constant reminder to me about who’s in charge.”

Crabb: “So God changed his mind after 14 years?”

I said I was going to burn for you and I am, every single day.

Morrison on his 2019 federal election win.

In his first speech to Parliament, Morrison named half a dozen men of religion. In addition to Baird, there were local church leaders, the Reverend Ray Green (Uniting Church) and Hillsong pastors Brian Houston and Leigh Coleman.

For me, faith is personal, but the implications are social — as personal and social responsibility are at the heart of the Christian message. In recent times it has become fashionable to negatively stereotype those who profess their Christian faith in public life as ‘extreme’ and to suggest that such faith has no place in the political debate of this country. This presents a significant challenge for those of us, like my colleague, who seek to follow the example of William Wilberforce or Desmond Tutu, to name just two. These leaders stood for the immutable truths and principles of the Christian faith. They transformed their nations, and indeed the world, in the process. More importantly, by following the convictions of their faith, they established and reinforced the principles of our liberal democracy upon which our own nation is built.

When Morrison spoke at the Australian Christian Churches National Conference on the Gold Coast in April his speech was replete with coded references which were clearly understood by his Pentecostal audience.

For such a time as this.

A reference to the Book of Esther about the potency of rising to the challenge in a dangerous moment.

Blessed to be a blessing.

A reference to the prosperity gospel at the core of Pentecostalism. The logic is that if you are not blessed by God you will not prosper — and to be blessed you have to pay a tithe. In other words: the more you pay, the more you are blessed and and the more you will prosper. The converse is if you don’t pay you will not find prosperity.

I must admit, I was saying to myself: ‘Where are you? Where are you? I’d like a reminder, if that’s OK.’ And so I walk … into [Ken Duncan’s] gallery and there, right in front of me, was the biggest picture of a soaring eagle that I could imagine. Of course, the verse hit me that soaring on the wings of an eagle, run and do not grow weary, walk do not grow faint. But the message I got that day was, ‘Scott, you’ve got to run to not grow weary. You’ve got to walk to not grow faint. You’ve got to spread your wings like an eagle to soar like an eagle.’

I’ve been in evacuation centres where people thought I was just giving someone a hug and I was praying. And putting my hands on people in various places, laying hands on them and praying in various situations.

The “laying of hands” is a religious prayer practice believed to heal individuals.

He said, ‘I have prepared this banquet for you in the presence of your enemies, that I will be with you at that table.’ It is a wonderful reminder to me each and every day.

Morrison quoting Psalm 23:5 to tell his faith audience that life is hell as prime minister out there in the secular world.