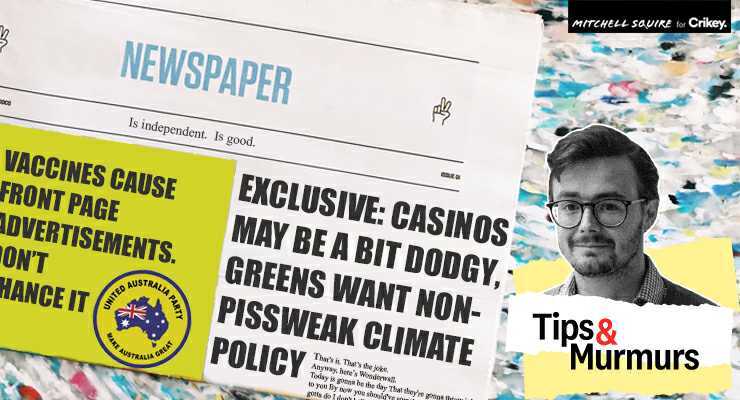 Joe Hildebrand adds his voice to the News Corp net zero push, and it’s as you may expect. This and more from the Crikey bunker.

What do you know? Yesterday’s Joe Hildebrand contribution to the laughable News Corp push for net zero by 2050 is emblematic of the campaign as a whole. Delivered with a wide-eyed faux-wackiness that would be merely grating (instead of unbearable) if Hildebrand were half his actual age, it focuses on the Greens’ decision to vote against the Rudd government’s Carbon Pollution Reduction Scheme (CPRS) back in 2009. Yep, we’re doing all this again.

The supposed significance of this moment may be the one article of faith News Corp and Kevin Rudd still share. This significance has of course been retrofitted. As Bernard Keane has detailed, the CPRS was inadequate policy and, more importantly, was later replaced by a better scheme, which ran successfully for two years before the Liberals came to power (riding a wave of News Corp adulation) and scrapped it.

But it suits everyone invested in News Corp to treat the CPRS vote as some kind of Rubicon moment. It feeds the “extremists and vandals on both sides” narrative and helps blur the active role News Corp has played in stoking opposition to climate change action and elevating denialist voices. It blurs the relentless obstruction from the Coalition over the same period. And like any journalism that suits everyone in power, it is utterly useless.