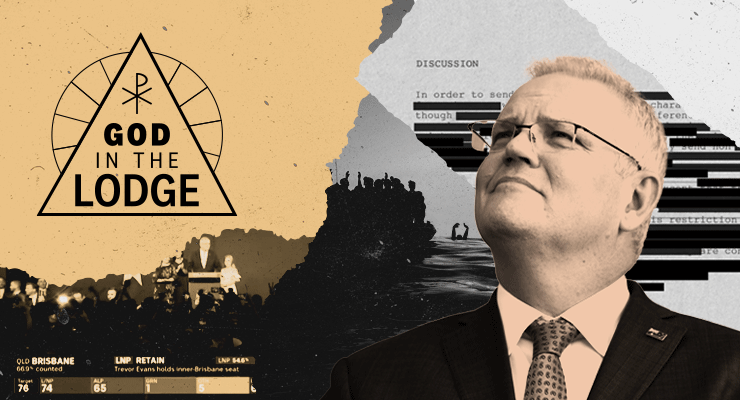 This is part four of the series God in the Lodge. Read part one here, and find the full series here.

When it comes to the biggest moments of his personal and political life, Scott Morrison is clear about who he believes is calling the shots: God. At the same time, the prime minister asks us to believe his religion does not influence his policies.

So can Morrison compartmentalise his life as he would have us believe? Can Morrison credit God with his 2019 election win, but insist that God’s role in his public life stops there?

In most cases we can’t know for sure, but there are specifics worth seeing through the lens of Morrison’s evangelical Christianity.

Morrison has said he was called by God to be prime minister, according to former Hillsong pastor Joel A’Bell who was Morrison’s confidante before he entered Parliament.

He has reinforced this on several occasions saying God gave him a sign on the campaign trail in 2019 that he should keep going, against the odds. He has also adopted a key biblical phrase, “for such a time as this”, to mark himself out as having a duty to act.

Morrison has adopted the Pentecostal story that Australia will be the place from which a worldwide Christian revival is launched. His mentor, Pastor Brian Houston, has said the same.

The fact that the prime minister believes he has divine authority may insulate him from a sense of needing to account to any secular authority for his actions. In other words, what he does is right because God is in charge and God chose him to run the country.

Voiding the processes of accountability

Morrison sits atop what is arguably the most anti-democratic government Australia has known.

He has been at the forefront since his days of “on-water matters” as immigration minister.

His government has worked assiduously to avoid accountability. It has cloaked its deliberations in secrecy. It evades or dismisses negative findings from the Australian National Audit Office. It has watered down freedom of information, dispensed with open, transparent appointments for government roles, and it refuses to introduce an effective federal anti-corruption body.

This might be driven by political opportunism. It is also consistent with a belief that  accountability should be to God rather than instruments of the state. It is consistent too with the personality of a leader who believes he has been called to do God’s work.

Backing Stuart Robert — come what may

Queensland MP Stuart Robert is the chronic underperformer who was taken out of cabinet by former PM Malcolm Turnbull. Morrison not only brought him back but increased his responsibilities and put him on the powerful expenditure review committee.

A reflection of merit? A need to have more Queenslanders in the cabinet? Or is it because “Brother Stewie” (as Morrison called him at a Pentecostal conference this year) is a long-term Pentecostal believer who has been a pastor at a Gold Coast church?

Morrison uses religion to make a public, political bond with the new NSW premier: “Dom and I, you know, we’ve got a long-term relationship working together, and we share very, very sound beliefs.” Yet he castigates those who accuse him of letting religion into his politics.

As social services minister in 2015, Morrison said he would “never”  support voluntary voluntary assisted dying (VAD). He told 3AW: “I believe in the sanctity of human life.” This is in spite of VAD commanding high support — up to 85% — in his electorate. Morrison’s views, as the most senior Liberal, may be relevant when it comes to his home state of NSW, where Liberal MPs may be given a conscience vote on VAD law.

In 2019 Morrison said he was a “conservative” on abortion after a bill was being debated in NSW.

Who really knows what Morrison thinks on this issue? He came into Parliament with a lump of coal only four years ago, and now talks vaguely about net zero by 2050. His (proven) refusal to act on climate change might be because his government is backed by fossil fuel industries. But his lack of urgency is also consistent with a Pentecostal belief in an end-of-days prophecy and that ultimately whatever happens is God’s plan.

This phrase captures Morrison’s view that it’s not up to him to act. It is also consistent with an evangelical belief, as above, that whatever happens is God’s plan.

The government’s punitive approach to those on benefits might reflect a neoliberal view of the world as being divided into lifters and learners. It is also consistent with the prosperity gospel of Morrison’s Pentecostalism that God helps only those who help themselves — or you have to have a go to get a go.

He is one of the unheralded architects of robodebt, which was introduced on his watch as social services minister.

Morrison’s well documented problems with gender equity might be a case of old fashioned chauvinism. It is also consistent with an evangelical Christian view of gender roles that define men as the breadwinners and their wives and daughters as the caregivers, fulfilling God’s intentions for them.

Jerusalem as the capital of Israel

In the days before a crucial byelection for the seat of Wentworth in 2018, Morrison blindsided just about everyone when he announced he was considering moving Australia’s embassy in Israel from Tel Aviv to Jerusalem, upending decades of Australian foreign policy.

The announcement might have been a piece of political opportunism designed to increase the Liberal vote for candidate Dave Sharma in an electorate where the change might swing a substantial Jewish vote. It is also consistent with the evangelical Christian idea that Jerusalem was God’s holy city and that Christ would return there to rule as king, as part of an end-of-days prophecy which would herald a 1000-year reign of peace under God.

Morrison’s Jerusalem move accords too with the thinking of former US secretary of state Mike Pompeo. Pompeo is a fervent evangelical Christian. He praised the US decision to move its embassy to Jerusalem because it is “the rightful capital of the Jewish homeland”. In other words it has everything to do with religious prophecy, and very little to do with a policy to bring peace.

In lock step with Trump and Pompeo over China

Morrison startled the horses when he went out on the front foot early last year to demand an independent international investigation into the source of COVID-19 in China. His intervention surprised older China-hands who wondered what the benefit was for Australia in putting its major trading partner offside.

He might have done it for domestic political reasons, to play to growing anti-China sentiment. However, Pompeo immediately backed Morrison’s call: “The United States commends the Morrison government for standing up for democratic values and the rule of law despite intense, continued coercive pressure from the Chinese Communist Party to bow to Beijing’s wishes.”

In the following months Pompeo began to frame the “democratic values” issue in religious terms, describing communist-run China as “the gravest threat to the future of religious freedom”. (This follows George Bush’s Middle East playbook where “democracy” and Christianity worked hand in hand.)

Maybe it is still too hard to be definitive about how Morrison’s beliefs affect his judgment. Maybe not. But what is true is that on every main social issue he has toed the same line as his faith — and by his actions in appointments and public positions, never offended his religious base.

By his deeds we shall know him? The day of judgment approaches.

Next — Bruce Baird and The Family — the PM’s Christian scaffolding