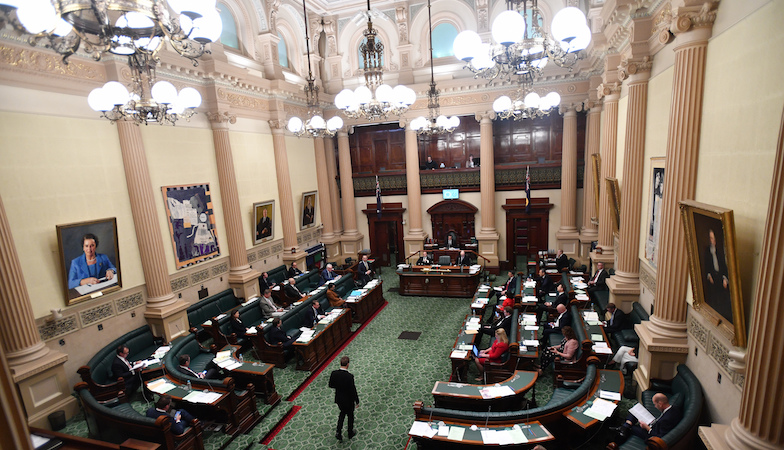 Newly minted SA Speaker Dan Cregan has been snubbed by Premier Steven Marshall after the Liberal turncoat ascended to the post in an extraordinary late-night coup earlier this week, The Advertiser reports. Here’s what happened: Liberal MP Cregan quit the party late last week to become an Independent. Then a bill passed through the lower house which would permit an Independent speaker — it’s yet to go to the upper house. Then on Tuesday, SA Labor joined forces with the six folks on the crossbench to oust then-Liberal speaker Josh Teague.

The party is positively livid. Liberal MP Adrian Pederick called it the “biggest dog act” he had ever seen, while Marshall didn’t even show up to Cregan’s swearing-in ceremony. He was blindsided by the machinations, saying “the constitution was amended without much thought whatsoever” as the ABC reports. It’s a hefty pay rise for Cregan — he’ll pocket $350,000 a year, up from his backbencher salary of $200,000. But he’s declined the car, saying he prefers his Ford Falcon.

Speaking of paydays — the SMH reports this morning that former NSW premier Gladys Berejiklian and former deputy John Barilaro are still receiving their salaries and are yet to formally resign. NSW Opposition Leader Chris Minns called for them to stop wasting taxpayer money: “If you’re going to go, go”, he says. Berejiklian reportedly pulls in $407,980 a year, according to Pedestrian.

WA Premier Mark McGowan had a pretty good day on Wednesday. He had victories against “east coast yuppies, a billionaire and bikies”, WAToday’s Hamish Hastie writes. First, a High Court win against UAP billionaire Clive Palmer, who was trying to extract $28 billion — yes folks, billion — in compensation for a stalled iron ore mine in Pilbara. It would have almost certainly bankrupted the state, McGowan says. Now Palmer faces a $2 million total bill for the state’s legal costs (including his failed border challenge last year, as The Conversation explains). If he doesn’t pay, the judge says he’ll seize Palmer’s luxury jet.

Then, another victory: two Melbourne socialites who fudged NT documents to go to the AFL grand final were given jail sentences, as 7News reports — a major win for a premier who loves to both dig the boot into the eastern states and politically posture a hard-line pandemic stance. Finally, his Police Minister Paul Papalia introduced a new bikie law that will see club patches and even insignia tattoos become illegal, as news.com.au reports. No doubt McGowan be hitting the Swinging Pig — reportedly his favourite haunt — for Friday celebratory bevvies.

Minister for Immigration Alex Hawke says he wants the power to deport dangerous perpetrators on temporary visas, as Guardian Australia reports. The problem, according to Labor? He already has that power. Hawke is pushing for a vote on the controversial Strengthening Character Test bill, which allows for the cancellation of visas after conviction for offences including domestic violence.

Labor’s Kristina Keneally says the bill has been through two Senate inquiries, and both failed to find the extra power that Hawke would gain. Keneally’s worry is that the bulked-up policy could lead to trivial conduct being treated the same as violent offences — and with some experts estimating a five-fold increase in deportation under the new policy, it could see even more Australian families torn apart by deportation.

And it’s not like our existing deportation policy is without problems — indeed it was slammed as “corrosive” by New Zealand PM Jacinda Ardern in a heated press conference with Scott Morrison last year, as BBC reported. The problem, Ardern says, is that many people who may have been born in her country but had no ties to it as adults have been swept up in the deportation policy. She estimated a third of the thousands of people kicked across the ditch since 2014 hadn’t lived there at all during the last decade, as Stuff reports.

If Pom Pom the Pomeranian can survive a tornado and a 300-metre toss, then you can get through your Friday. The little fluff-ball was flung during Lithgow’s tornado at the Central Tablelands in NSW, ABC reports. It was like The Wizard of Oz, Pom Pom’s owner Scott McKinnon says. His home was torn to shreds as the dangerous weather came through, and as he clung to a tree he saw Pom Pom get sucked into a 20-metre high vortex — along with some of the neighbour’s cows.

Pom Pom, who McKinnon described — fondly, one assumes — as rat-sized, was thought to be lost. As a devastated McKinnon faced the aftermath, he heard the impossible — a distant yapping. Pom Pom was discovered and taken to the vet with a few broken ribs and a punctured lung. She has just returned home. You’d think such a thing would change a pint-sized Pomeranian, perhaps make her terrified of the cruel natural world that sucked her up and spat her out, but McKinnon says eh — she’s fine. “She’s 100 miles an hour all the time, up-down, up-down,” he says.

Sending you the strength and resilience of Pom Pom today.

The aggressive dick-swinging in hetero bars … I just got very sick of as a kid because it was like, ‘I just don’t wanna end up being in a punch-up’. And I did, that would happen quite a lot … And I could meet girls there ’cause there were a lot of girls who were there for exactly the same reason I was there. So I was, there was kind of, you know, there was an ulterior motive.

The actor shared that he has been frequenting gay bars for “as long as I can remember”, describing the environment as “chill”. Craig has been celebrated for bringing the iconic James Bond role — whose earlier characterisation was described as “basically a rapist” by the latest film’s director — into a progressive era in which women are 007s and a hint at a gay experience in Bond’s past made the big screen.

“Despite Facebook’s transparency efforts which allowed Crikey to find out about these advertisements and their targeting, the identity of the person or people behind this campaign is unknown.

“That’s despite a five-figure spend in just two weeks, among the top Facebook political and social advertisers during that period. As Australia is not yet in an election period and these ads are not explicitly about an election, it does not appear to break election advertisement disclosure rules … But it lays out a playbook for how someone can easily run a shadowy digital political campaign without accountability.”

“Joyce told ABC Brisbane [Wednesday] night that (as predicted by Crikey) “you can lock it in” when asked about the extension of the disastrous inland rail line to Gladstone — expected to blow out the cost of the project from $15 billion to $20 billion. Bizarrely, the Canberra press gallery, which is obsessively focused on what deal Morrison can engineer with the Nationals over a net zero commitment, completely ignored the announcement.

“The cost of the inland rail project from Melbourne to Brisbane has already blown out twice, from $4.9 billion to $10 billion and subsequently $15 billion. Proponents have been pushing to extend the line — which will never make back its construction costs and is unlikely to cover its operating costs — an extra 540km from Toowoomba to Gladstone, an idea that has received support from both sides of politics.”

Bali reopens to international travel, but Australians are still locked out (ABC)

Dithering on net zero leaves nation with nothing — Chris Bowen (The Australian) ($): “Batteries, electric vehicles, pumped hydro, offshore wind — all these technologies are available for massive deployment right now, but barely are uttered by those Liberals who’ve recently had their road to Damascus conversion. Electric vehicles — we can all remember the prime minister bleating that they would ‘end the weekend’ … Tim Wilson, the newly appointed ‘modern Liberal’ to the portfolio, had campaigned for Australia to leave the Kyoto climate deal.

“Just as delay in the global race to secure vaccines has cost Australia billions through further lockdowns, delay in setting our economy up only serves to undermine Australia’s interests. Every month, let alone year, counts in this next decade … If the Coalition fails to deliver a sensible climate and energy plan in the coming weeks, we should not kid ourselves into thinking our global customers will wait another few years for the Liberals and Nationals to set another meeting to talk about making a plan.”

Losing one cabinet minister is unfortunate, but seven is just careless — Annika Smethurst (The Age): “An effective opposition should be able to mount a very sound argument that such chaos and scandal are perhaps part of a wider culture within the state government. In John Howard’s first two years as prime minister there were seven resignations in response to scandals. At the time then-opposition leader Kim Beazley used it to successfully attack Howard and his government, framing the prime minister as complacent at best, or worse, incompetent.

“As ministers have fallen around him, Daniel Andrews has successfully distanced himself from the chaos and, in many cases, substantial deterioration in ministerial standards. Hounding Andrews over tenuous links to an anti-corruption probe is premature. The opposition would be better off building the narrative that these resignations point to the greater issue of ministerial accountability and promise higher standards if the Coalition wins the next election.”