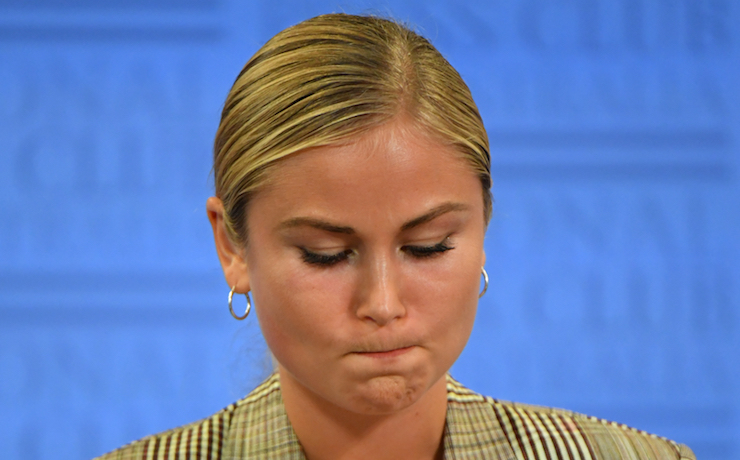 “The cost of speaking truth to power” is how Grace Tame described what happened when she called out the recent platforming of Pauline Hanson by Jessica Rowe.

It is a case study in silencing, the process which is a key structural support of the system which enables, protects and forgives perpetrators of violence and violation.

Tame is Australian of the Year, awarded because she is “an outspoken advocate for survivors of sexual assault” who has used “her voice to push for legal reform and raise public awareness about the impacts of sexual violence”.

Tame tweeted her opinion on Rowe’s decision to give Hanson a soft-ball interview on her podcast series, in which they chatted about everything except her racism and bigotry. As Tame put it:

This is how discrimination and hate is subtly enabled and normalised.

Everyone’s entitled to their own views, but not all views should be valorised by promoting their source.

[Hanson] doesn’t need help to be heard, but those whose oppression she’s both driven and reinforced do.

She would have expected to be trolled for it, and has been, viciously. Rowe folded under the public pressure, deleting the podcast, and another chapter in the cancel culture debate was written.

Then came the sermon from the mount of the The Australian, delivered by Janet Albrechtsen. “No joy,” she began with a parsimonious sigh, “comes from reminding Grace Tame …” and away she went.

Tame’s crime was that she politicised her position — surrendered it to “dirty politics”.

The thesis goes like this: “Tame was made Australian of the Year for her tremendous work to highlight the scourge of sexual abuse and fighting for women to be heard. As Australian of the Year, she was perfectly placed to use that privileged platform in a non-partisan way to unite the country around these important issues. That is how you bring power to a cause. Instead, Tame is dividing the country.”

How? By her “increasingly political interventions”. Albrechtsen singles out comments made by Tame about Prime Minister Scott Morrison (that he lacked a moral compass by promoting Christian Porter to acting leader of the House), Porter (by calling for an independent inquiry into the rape allegations made against him — claims Porter has denied), and Amanda Stoker (by expressing her view that Stoker was a poor choice as minister for women).

Stoker has said that while “[Tame] should be heard, that doesn’t necessarily make her right”. Albrechtsen agreed, saying Tame was “entitled to join a censoring mob [with regard to Hanson] but she was wrong to do so”.

Wrong? I am constantly confused by the free speech warriors. That statement makes no sense whatsoever.

Anyway, Albrechtsen’s main point was that it was a bad idea to make Tame Australian of the Year because she is a “fiery and passionate activist who may end up dividing the nation, rather than uniting us”.

Because, you see, she cannot express opinions about the decisions, policies or behaviour of politicians without being a political partisan. As Australian of the Year, her job is “to unify the country around important issues”. On Albrechtsen’s thesis, she may not talk about politics, which includes anyone involved in politics, because that is politics.

And yet, Tame is Australian of the Year because she talks about being silenced. That was her experience as a sexual violence survivor, and she is a passionate advocate for an end to the silencing of survivors.

In relation to Stoker, she was speaking of the promotion of a minister who has actively supported men’s rights activist Bettina Arndt and her controversial “fake rape crisis” universities tour. Again, the message to survivors could not be clearer.

Tame has also spoken of her disgust at Morrison’s words to her after she talked about the abuse she suffered as a child at the Australian of the Year ceremony. “Well, gee, I bet it felt good to get that out,” Morrison said to her backstage.

Albrechtsen’s message to Tame is simple: shut the fuck up. Know your place. Speak, by all means, that’s your assigned role, but only on subjects and using words which will change nothing and scare no one. Your “youthful exuberance” renders you at risk of being like Greta Thunberg,“prone to saying patently silly things”. Got it, child? Sermon — after some closing quotes from Arthur Miller, John Stuart Mill and Shakespeare — over.

The good news is that that one thing Tame has learnt through all the silencing she has suffered, is everything that is in the bag of tricks of the protectors of institutional power. She won’t be silenced again.

Michael Bradley’s new book System Failure: The Silencing of Rape Survivors, part of the series In the National Interest, is out now from Monash University Publishing.