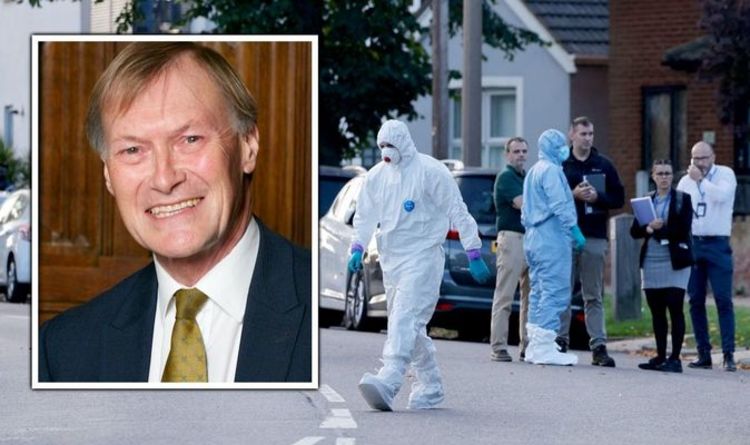 The 69-year-old was pronounced dead this afternoon after he was stabbed multiple times inside Belfairs Methodist Church. The Conservative MP died at the scene after the attack by a lone knifeman in the in Leigh-on-Sea area. A 25-year-old man has been arrested on suspicion of murder. Police said they had recovered a knife from the scene and are not looking for anyone else.

The father-of-five had been the MP for Southend West for 1997 and was first elected to parliament in 1983.

Mr Amess opened up about his 37 years in British politics in his book ‘Ayes & Ears: A Survivor’s Guide to Westminster’.

In the book, published in December 2020, Sir David issued a stark warning about his own security.

He wrote: “I myself have years experienced nuisance from the odd member of the general public at my own property.

“We regularly check our locks and many others have CCTV cameras installed but probably the most significant change has been with constituency surgeries.”

Labour’s Jo Cox, the former MP for Batley and Spen, died after being shot and stabbed at her own constituency surgery in 2016.

Many commentators, as well as the MP’s widowed husband Brendan Cox, have condemned the fatal attack on Mr Amess five years after Mrs Cox’s murder.

Before Mr Amess was pronounced dead, Mr Cox extended his thoughts to the MP’s family and said the attack “brought back” the pain of losing his wife.

In a statement on Twitter, he said: “Attacking our elected representatives is an attack on democracy itself. There is no excuse, no justification. It is as cowardly as it gets.”

Mr Amess had referred to Mrs Cox’s murder and its effects on the conversation around the safety of MPs.

Mr Amess wrote: “The campaign was completely overshadowed by the horrendous death of Jo Cox.

“My parliamentary friend, Mark Francois, first alerted me to the breaking news that an MP had been seriously injured. Like everyone else I was stunned.”

The Tory MP also elaborated on how in the wake of “heightened security concerns”, MPs had altered the behaviour.

He wrote: “There can be no doubt that as a result of these most Members have modified or changed the way they interact with the general public.”

In another passage, he added: “The British tradition has always been that Members of Parliament regularly make themselves available for constituents to meet them face to face at their surgeries.

“Now advice has been given to be more careful when accepting appointments.

“We are advised to never see people alone, we must be extra careful when opening post and we must ensure that our offices are properly safe and secure.”