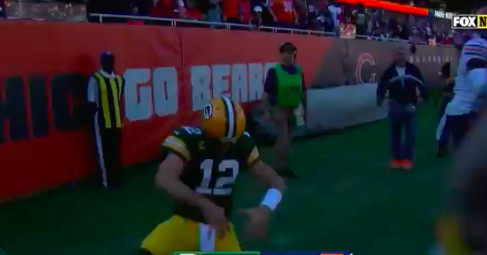 In the ultimate example of swinging down, Packers QB and Jeopardy! host Aaron Rodgers couldn’t resist rubbing it in when he sealed victory over the Bears on Sunday with a six yard TD run.

There’s a lot of different ways you can look at this. Firstly, I mean, Rodgers isn’t wrong. He HAS owned the Bears his entire adult life. After the win on Sunday Rodgers extended his record over Chicago to an astonishing 22-5, while also throwing for 59 touchdowns and only 10 interceptions over the head-to-head meetings.

Should Rodgers have said this? I mean, who’s to say. I do know we tend to clutch pearls way too much when it comes to NFL players trash talking. I assure you that much, much worse things are said on the field between players every single week, we just don’t get to hear it. This was a rare occasion where Rodgers went off and the microphone picked it up.

Sure, he maybe crossed the line a little by directing this at fans of the Bears rather than the team he was playing. In general I’ve found Bears fans to be some of the most realistic and self-deprecating fans in the NFL, so it’s not like they need to be reminded by Aaron Rodgers that he owns them. In general Chicago fans know when they suck, when they’re good, and when (like this year) they’re rebuilding.

I’ll let you decide: Was Aaron Rodgers wrong for talking trash, or is it all fair game?