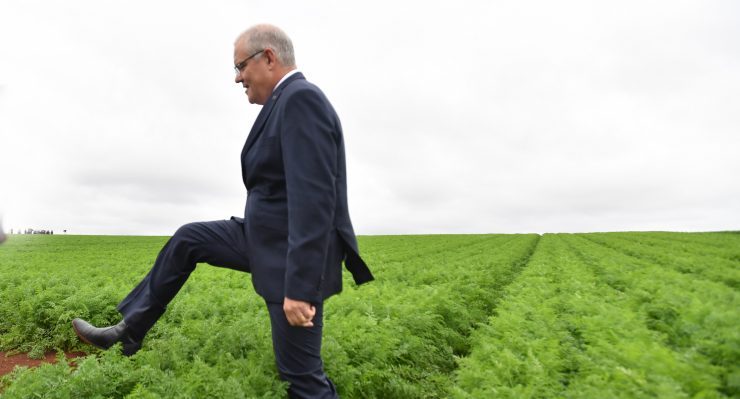 Australia will remain one of the world’s leading energy exporters in 2050, while gas, resources and agricultural exports will be more lucrative and hefty than now — according to Prime Minister Scott Morrison’s “confidential” net zero modelling, The Australian ($) reports.

He’s yet to sell the dream to stubborn Coalition figures, but yesterday told them that not taking climate action risked alliances, our national security, and our international standing, as AFR says. And the future of humanity, one assumes. Morrison wants a binding net zero by 2050 agreement for Glasgow, as The West says, but won’t budge on our 2030 emissions, arguing our 26-28% target was an “election commitment”. In some positive news, Energy Minister Angus Taylor says he’ll release data later in the week that shows we are on track to see a 32-35% reduction in emissions on 2005 levels, the Fin says.

Guardian Australia says the net zero consensus is held up by Matt Canavan, Llew O’Brien, Keith Pitt, Sam McMahon, George Christensen, and David Gillespie. Senator Bridget McKenzie went pretty hard in Parliament yesterday, saying regional Australians need the Nats to be strong. But some regional Liberals — a group who hold more seats than the Nats — told the ABC the benefits of net zero for farmers are being ignored by the Nationals.

Former US secretary of state Colin Powell is dead at 84. Powell died from COVID-19 complications, his family confirmed. Powell was one of America’s most prominent and popular Black figures, ABC reports, and his leadership in several Republican administrations shaped foreign policy during his four decades in public life.

Powell began as a soldier in Vietnam and rose through the ranks to become the first Black national security adviser, appointed under Ronald Reagan, as The New York Times writes. He was also the youngest and first Black chairman of the joint chiefs of staff under then-president George H W Bush before he retired, CNN reports, but returned to public life as secretary of state almost a decade later under George W Bush.

But Powell’s career was stained by his case to Bush Jr that Iraq had weapons of mass destruction. Powell later admitted it was based on inaccuracies and twisted intelligence, Reuters says. No weapons were ever found. Later in Powell’s life, he shifted party allegiance, backing Democrat Barack Obama for presidency — something he himself had considered running for in the ’90s, The Washington Post ($) says. President Joe Biden described Powell as a “dear friend”.

Rio Tinto should face a judicial inquiry and possibly criminal charges for destroying Juukan Gorge, according to WA Senator Dean Smith and Nationals MP George Christensen. One of the two caves in Juukan Gorge, which dates back 46,000 years, was the only place in inland Australia with evidence of human daily life prior to the Ice Age, Guardian Australia says. The mining giant blew it up last May.

The New Daily reports Rio got legal permission under WA’s 50-year-old Aboriginal Heritage Act, but the company admitted it abused the trust of the Puutu Kunti Kurrama and Pinikura peoples. They were not aware it would be blown up until it was too late to remove the explosives. Chair Warren Entsch described the peoples’ “profound grief”, as news.com.au reports.

Among the changes recommended by a joint committee tabled on Monday, as WAToday reports: the Indigenous minister, not the environment minister, should be in charge of all Indigenous cultural heritage matters, and legislation should be written alongside Indigenous Australians. The inquiry’s report also found there are dozens of other sites at risk of becoming the next Juukan Gorge under our outdated legislation, ABC says.

Some cool ideas have taken out top gongs at The Earthshot Prize, launched by beloved British naturalist David Attenborough and Prince William. It’s a salve for anyone feeling anxiety about the future of our climate — or despondent about our political news cycle at the moment.

India’s Vidyut Mohan decided to take on the billion-dollar problem of agricultural waste. The air pollution from farmers burning their waste can reduce life expectancy by up to a decade in places like New Delhi, he says. So Mohan designed a cheap and portable attachment for tractors that converts crop leftovers to fuel and fertilizer, reducing emissions by 98%.

The Bahamas’ Sam Teicher and Gator Halpern couldn’t stand watching coral reefs die. So the pair created Coral Vita, a sort of nursery that grows coral on land 50 times faster than traditional methods. Once grown, the coral can be transplanted into its new home in the ocean. The duo dream of a Coral Vita in every country with a reef.

The city of Milan has a rule: no food waste. Globally, a third of all food produced is wasted, yet hundreds of millions live with food insecurity. So the Italian city diverts about 1000kg of food leftovers in canteens and supermarkets to NGOs. They turn it into meals for the needy — I’m thinking there’s a lot of risotto going around.

Wishing you a hopeful Tuesday ahead, folks.

I love the Aussies. Their history of rugged independence is legendary; I’ve always said Australia is the Texas of the Pacific. The COVID tyranny of their current government is disgraceful & sad. Individual liberty matters. I stand with the people of #Australia

In a case of “oh, you keep it”, the conservative US senator offered Northern Territorians support for their supposedly tyrannical pandemic restrictions after the Top End mandated the vaccine for workers. Leader Michael Gunner sent Cruz a note back, patiently explaining that the NT had been in lockdown for a total of eight days during the pandemic, there had been no COVID fatalities in the NT to date (compared to 70,000 in Texas), and that the vaccine protects the world’s oldest living culture. “When it comes to COVID, I’m glad we are nothing like you,” Gunner signed off.

The Nationals don’t give a damn about the regions. Here’s the proof

“For the party that claims to represent the regions and which has been in power for the great bulk of the years since the mid-1990s, this is surely a litany of failure, despite the billions of dollars its ministers have rorted and misdirected across those years …

“Regional communities are only the pretext for the Nationals to run their scam. If they ever actually delivered for those communities, they’d lose their primary tool for leveraging taxpayer dollars out of their Liberal colleagues. They have a vested interest in, even an addiction to, keeping their communities poorer, worse educated and in poorer health. Regional communities can only prosper in spite of the Nationals, not because of them.”

Corruption at the top? Gladys Berejiklian faces her ICAC moment of truth

“Was the Australian Clay Target Association a worthy recipient of $5 million of public money? According to its 2017 annual report, it was advised on January 2, 2017 that the $5 million grant to build a clubhouse was successful: ‘We must recognise the efforts of Daryl Maguire, the local state LNP member, without whom the project would never have been possible.’

“But it’s not like clay target shooting is a very popular sport. In 2017 there were only 14,126 members of the organisation, which puts it somewhere between Quidditch and curling in terms of public engagement. According to the accounts lodged that year, if you removed the state government grant, it still would have been in the black — recording a profit of $272,397.”

“The newness of the platform and the young skew of the user base that excludes many of those responsible for regulating or reporting on it (how many Australian politicians or journalists have TikTok accounts that they use to produce content?) mean it hasn’t received the scrutiny it deserves, despite millions of highly engaged Australian users.

“If anything, TikTok has more concerning aspects than other social networks. The algorithmic engine of the app’s For You Page — the main way videos are consumed — has more sway over what users are shown than other platform’s algorithms, which are more based on who a user chooses to follow.”

Facebook to create 10,000 jobs in EU to help build ‘metaverse’ (The Guardian)

Toyota, Stellantis to build EV-battery factories in the US (The Wall Street Journal)

Analysis: Is the US entering a Cold War with China? The question is about more than just terminology (The New York Times)

Eroding privacy: The murder of an MP could happen in Australia too — Rob Harris (The Age): “There is no longer a distinction between places of work, public events, private homes or personal time. Nor between elected officials and family members. Partisan media commentators don’t have a problem with publishing the personal phone numbers of MPs they don’t like on social media. Worse, when politicians are ‘egged’, the perpetrator is often held up by their critics as a hero.

“Not long ago, a federal cabinet minister was in Bunnings alongside their child on a Saturday afternoon, wearing shorts and a cap, when a QAnon adherent accosted them in the aisle and abused them about mandatory vaccinations in a ‘very aggressive’ fashion. The harasser filmed the interaction, presumably intending to post it online. Fortunately for this MP they were one of the growing numbers who have, or have had, a 24-hour personal security detail.”

What’s behind News Corp’s new spin on climate change? — Gabi Mocatta (The Conversation): “News Corp must have done its climate communication research. It has assembled a collection of stories using best-practice climate communication techniques: telling a global story with a local face, visualising climate impacts and focusing on solutions, not creating fear. Crucially, the campaign marks a change from News Corp’s long-held position on climate action.

“It’s moved from calling decarbonisation too expensive and bad for jobs (it tagged the cost at A$600 billion in 2015), to describing it now as a potential $2.1 trillion economic ‘windfall’, offering opportunities for 672,000 new jobs … Surprisingly, the campaign is making a big effort to spruik nuclear power. It states: ‘our aversion to nuclear energy defies logic’ and advocates strongly for an Australian nuclear industry for ‘national security’ purposes as well as energy.”