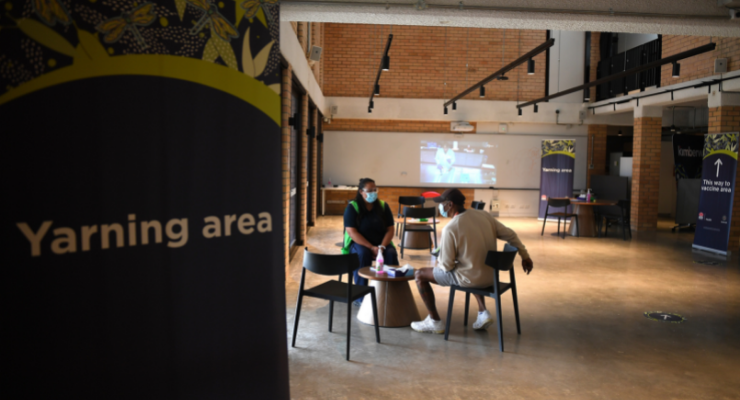 Over a third of all Indigenous Australians in NSW are not fully vaccinated, the SMH says, despite being part of the priority vaccine groups. Just 62% have received both jabs, compared to 81% of the overall population. Ten Indigenous Australians have died so far, Guardian Australia reports, while 500 have been hospitalised.

So what’s causing the gap? AH&MRC’s Peter Malouf says first and foremost, government messaging failures, but also anti-vaccination movements particularly in “the Hunter Valley and North Coast”. NACCHO’s Pat Turner says they’re also working against conspiracies and misinformation — some peddled by religious groups in the US, he says. IndigenousX’s Nayuka Gorrie writes that hesitancy can also have historical roots: “our bodies have been used and discarded by the medical industrial complex without our consent”, naming the University of Adelaide’s past experiments on Indigenous people. But, Gorrie concludes firmly: “the vaccine is the best way I can keep my family and community safe”.

Fortunately, the mostly Indigenous town of Wilcannia — hit like a “cyclone” with COVID infections so badly that it made front page news in the US ($) — celebrated two weeks without a new case last week, Guardian Australia says. ABC reports it was Australia’s worst per-capita COVID outbreak.

ATO boss Chris Jordan has kept his lips buttoned despite the Senate ordering him to reveal businesses with a turnover of $10 million that received JobKeeper, ABC reports. Jordan says he has a duty to privacy — but the tax boss can’t just refuse the order, SA independent Rex Patrick explains. It would be like refusing a police direction or court direction. Patrick has referred Jordan to the commissioner for investigation by the Senate privileges committee, news.com.au continues.

If you’re wondering how it’s been done elsewhere — across the ditch, the New Zealand government released a list of employers who received support mid-last year, as 1news reported. There’s even a government online tool allowing the public to peruse the list. Among them: Air New Zealand, Bunnings, Alliance, Kiwirail and, of course, Harvey Norman.

Liberal Senator Gerard Rennick has given Prime Minister Scott Morrison an ultimatum, Guardian Australia reports: either take Queensland to the high court, or lose his vote on key legislation. Rennick says over 8000 Queenslanders remain stranded in other states as the Sunshine State’s border remains shuttered, though Premier Annastacia Palaszczuk has said they’d reopen at the 80% vaccine target (probably around December 17). Rennick reckons the country has become “eight different totalitarian states” — WA won’t open before Christmas, as The Australian ($) reports and Tasmania is reluctant, as The Examiner ($) says. In some positive news, however, vaccinated folks entering Victoria from Greater Sydney no longer have to complete any time in quarantine or get tested, the SMH reports.

Meanwhile Queensland is expecting 100 COVID-related deaths in the first 90 days of throwing the border open, a grim forecast considering a total of seven people in Queensland have died since the pandemic began. With that in mind, you’ve got just 12 days to get the jab, Palaszczuk has told 400,000 uninoculated constituents — that allows enough time for both vaccine dosages before the anticipated mid-December reopening. But it’s an uphill battle: her state has Australia’s second-highest hesitancy rate at 17.6%, The Brisbane Times reports (SA has the highest).

A 900-year-old sword from the Crusades has been found near the port city of Haifa in Israel, ABC reports. The incredible find was made by an amateur diver, who noticed the peculiar shape when the rolling sands of the seabed shifted. The hefty sword is encrusted in sea collateral at the moment, but the distinctive metre-long blade, hilt, and handle suggest well-preserved iron waiting to gleam once again, nearly a millennium on.

The Israel Antiquities Authority’s Kobi Sharvit was blown away. He said beneath its shell and stone coating the sword could even have a name engraved upon it, maybe by a long-fallen knight. He’s thinking it’s a Christian weapon — though both Muslim and Christian warriors used swords, he says Muslims were not known to travel to the area by sea. The Holy Land Crusades began in 1095AD when European Christians sought to regain land around Jerusalem. The bloody battles endured until the fall of Acre in 1291, which is depicted in Netflix’s historical drama Knightfall if you’re looking for a new series.

“These conditions have attracted merchant ships down the ages, leaving behind rich archaeological finds,” Sharvit said. “It was amazing, amazing to see a beautiful sword like this.”

Hope you experience a little marvel in your Wednesday, too.

That was corrected and again I apologise if there’s any sense that a sector has been included that shouldn’t have been, but it does not include entertainment venues. Entertainment venues will be covered by 80%. I know that it’s frustrating and everyone would like to be open at the one time.

The Victorian premier apologised after a roadmap showing that entertainment venues could reopen on Friday was revealed to be a “typo”, but one Melbourne venue had already booked eight shows and now faces refunding up to $4000 worth of tickets. Comedy Republic theatre’s Kyran Wheatley says he felt it was the latest in a string of pandemic incidences that showed disrespect for the hard-hit entertainment industry.

Just what is the point of Barnaby Joyce?

“Joyce and the Nationals are right to want a plan on how the climate transition will happen, what the new jobs look like, how regional economies will reshape without coal. But there’s an important fact to remember. They are part of the government. In fact they have been part of the government for 48 of the past 70 years, the period that has seen the people they represent decline in electoral importance and the towns and cities they live in largely decline.

“What is the point of the Nationals as representatives of regional Australia if it is going backwards? On their watch … Our agricultural exports have diminished and are largely captive to the prices international customers (who are signing on to net zero emissions) are willing to pay.”

Has Wagga ever staged the Olympics? No. So why did it need an Olympic-standard shooting range?

“The examination of Doorn by counsel assisting ICAC, Scott Robertson, is akin to that of a bricklayer building a wall. Robertson is painstakingly, word by word, building the case that Maguire’s requests for millions of dollars of taxpayers’ money did not meet any relevant criteria for funding.

“Doorn, and the public servant who gave evidence yesterday, Michael Toohey, correctly fulfilled their duties by denying the requests … Both men seemed perplexed and annoyed these requests had been taken out of the department’s hands and then fast-tracked by their political masters.”

Violent anti-vaxxers are wrong. But can their tactics hold any lessons for climate activists?

“We are sleepwalking into oblivion. The 2021 Intergovernmental Panel on Climate Change report once again came with a dire warning. This time UN Secretary-General António Guterres said earth is at ‘code red’.

“The circumstances which conspiracy theorists cite as why they are being forced from livelihoods or must accept intrusions into their ‘medical freedom’ — unchecked corporate power and governments that care little for the well-being of their citizens — are the real reasons why climate action is hamstrung and why we will probably have to live in a hostile world for the rest of our lives.”

Who are the world’s biggest climate polluters? Satellites sweep for culprits (The Wall Street Journal)

On a Pacific island, Russia tests its battle plan on climate change (The New York Times)

The [UK] government’s net zero plan is impressive, but it is high risk — Chaitanya Kumar (The Guardian): “The scale of transformation that the strategy is set to unleash across the entire UK economy is breathtaking. Our electricity is expected to be fully clean by 2035. Our homes will no longer have new gas boilers fitted after then either. No new polluting car will roam our roads from 2030 and we will plant trees in an area the size of Milton Keynes every year from 2025, and all of this at a cost that is less than what we spend on defence each year …

“The government has now submitted this strategy as part of its nationally determined contribution to the UN. And despite all the well-warranted criticism, this represents a watershed moment for the UK. With public concern on climate change at an all-time high and a strong consensus across all political parties on climate action, realising this strategy and hopefully building on it should be the foremost priority for the government. There are millions of jobs to be won and billions in economic gains to be had if we get this right.”

How the new human right to a healthy environment could accelerate New Zealand’s action on climate change — Nathan Cooper (The Conversation): “New Zealand’s courts and policymakers look to international human rights for guidance and standards. As recognition of the right to a healthy environment grows internationally, we can expect to see greater reliance on it here. But there is one specific area where I anticipate this right may provide a new approach: climate-change mitigation.

“When it comes to greenhouse gas (GHG) emissions and New Zealand, the elephant in the room — or the cow in the field — is the dairy industry. Between 1990 and 2018 New Zealand’s GHG emissions rose by 24%. The increase was driven largely by methane from livestock and nitrous oxide from fertilisers. Both of these GHGs are many times more potent than carbon dioxide. Continuing to operate with this level of GHG emissions will make it extremely difficult for New Zealand to do its fair share of climate change mitigation or meet its international climate change obligations.”