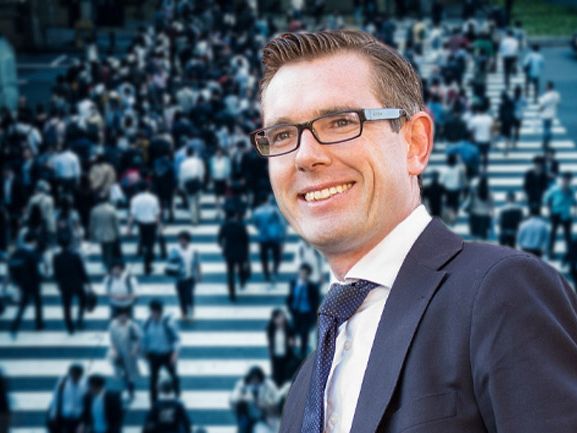 To achieve post-pandemic recovery, the NSW Government is advising an immigration surge that would be disastrous for the environment, writes Sue Arnold.

INSANITY REIGNS in Australia. The future of this ancient land is in the gravest jeopardy as government leaders ignore science and looming disasters for planet Earth.

As the Glasgow Climate Conference draws near, the public is subjected to an exponentially increasing spew of spin from our political masters.

Let’s start with NSW. On the one hand, Premier Dominic Perrottet and his new Treasurer Matt Kean are signalling that the state will lead the way climate-wise, relying on a $3 billion green hydrogen strategy to create 10,000 jobs by 2030.

Without explicit details on how this policy would be developed into action, the Perrottet Government may be using the same spin as Morrison — slogans.

Green hydrogen is not without considerable problems and according to experts, is at least a decade away.

At the same time as the new “green” Government led by a politician (on record supporting former President Trump) spouted its climate creds, the Australian Financial Review revealed that top NSW bureaucrats have urged the new Premier to push for:

‘…an explosive post-WWII-style immigration surge that could bring in two million people over five years… as a key means of economic recovery and post-pandemic growth.’

According to the report, the advice was part of an incoming briefing document prepared by the Department of Premier and Cabinet. Exactly who is responsible for drawing up this proposal is unclear, but surely there must have been some political instruction. Bureaucrats don’t work independently of government.

Given the timing, was this scheme a Gladys Berejiklian plot?

Dick Smith blasted the proposal as crazy. There’s been no response from the Premier. Nor any mainstream media articles on a proposal that has the potential to destroy remaining forests, biodiversity and the Aussie way of life.

The climate change impacts would be catastrophic. Carbon emissions which would be part and parcel of the housing developments needed to accommodate two million people in five years are unimaginable.

For starters, how much timber would be needed to build the massive urbanisation projects required to house two million? How many cars, hospitals, schools, infrastructure?

The concept of an ecological carrying capacity for this ancient land is not on any political agenda. More immigrants mean more growth, more consumption, more container ships, more and more.

Overpopulation is at the core of all greenhouse gas problems.

As the U.S. Centre for Biological Diversity spells out:

‘…unsustainable human population growth can overwhelm [less consumption and better technology]… we not only need smaller footprints, but fewer feet.’

How any thinking person could contemplate two million immigrants over the next five years is a question that should be on the front page of every newspaper and current affairs program.

The contradiction between Perrottet’s green hydrogen announcement and the revelations by AFR is a huge issue. Two million people need houses. Timber is used for building houses.

The NSW Forestry Corporation is carrying out industrial logging of native forests. Activists on the ground report many are being converted to plantations. The corporation has lots of documents demonstrating its efforts to deal with carbon emissions. Details are hard to uncover.

IA searched the corporation’s website for an analysis of current carbon emissions resulting from industrial logging. As usual, there’s no clear statement or evidence.

‘The combined effect of net sequestration of carbon in sustainably managed state forests combined with carbon stored in wood products produce the equivalent to taking more than 230,000 cars per year off the road.’

No mention of trucks, buses and other carbon-generating vehicles.

According to the Environmental Protection Agency, a typical passenger vehicle emits 4.6 metric tons of CO2 per year. Multiplying 4.6 metric tons by 230,000 equals 1,058,000 metric tons, which the corporation claims as a benefit to logging. No data or methodology for arriving at this estimate is available.

But in essence, the corporation appears to be saying that logging forests is the best way to sequester carbon emissions.

Given the revelations by the AFR, how many metric tons of CO2 a year would 2 million cars emit?

Some of the claims made by the Forestry Corporation are nothing short of extraordinary.

Science Daily published a 2019 study from the University of Wisconsin-Madison which demonstrated that products such as paper, lumber and furniture offset just 1% of annual global carbon emissions by locking away carbon in woody forms.

The Conversation published an article by David Lindenmeyer and Chris Taylor demonstrating that the claims made by the Corporation fail to take into account that logged native trees become woodchips, pulp and pallets and are destroyed.

As there is no available data on the amount of timber waste that is dumped in landfills, it’s virtually impossible to calculate whether landfill timber is storing more than 90% of Australia’s greenhouse emissions.

Without current data, methodology and independent analysis, along with the establishment of a balance sheet that shows carbon emissions caused by deforestation, landfills and wood products compared with the amounts of carbon sequestered by targeted native forests, responsible decisions can’t be made.

The importance of retaining forests is detailed on the Timber NSW website:

‘The world’s forests and soils store more than one trillion tonnes of carbon, twice as much carbon as is in the atmosphere. Forests have the potential to absorb about 10-20% of the total global emissions projected for the first half of the 21st Century.’

It doesn’t take a mathematical genius to work out that ending deforestation and protecting native forests is one of the best ways of cutting carbon emissions. However, this obvious fact doesn’t carry any weight with the Big Australia devotees as the most obvious step is to reduce immigration and engage the public in cutting consumption.

Moving on to the federal madness. A major question needs to be asked — is the National Party a threat to national security?

It’s difficult to witness a Coalition Party locked into pathetic reasons for holding the country to ransom over climate change. In fact, the National Party is looking more like the U.S. GOP and Republican state governors every day.

No doubt Senator Matt Canavan and MP George Christensen would be hits in Arkansas, Florida and Texas. Deputy PM Barnaby Joyce would go over a treat in the Ozarks.

A responsible political party in government would ensure that strident denial of the obvious must be balanced with a plan which would address how carbon emissions could be dealt with.

Criticising and carping are not the roles of responsible government. Morrison is a master of the art of doing nothing other than slogans whilst his Government’s partner denies science and human survival.

In stark contrast, Professor Paul Ehrlich, biologist and author of the explosive The Population Bomb 50 years ago, warns that ‘overpopulation and overconsumption are driving us over the edge’. He predicts a shattering collapse of civilisation as a near certainty in the next few decades.

Australia’s future is on the line. The next decade looks downright alarming.

Sue Arnold is an IA columnist and freelance investigative journalist. You can follow Sue on Twitter @koalacrisis.