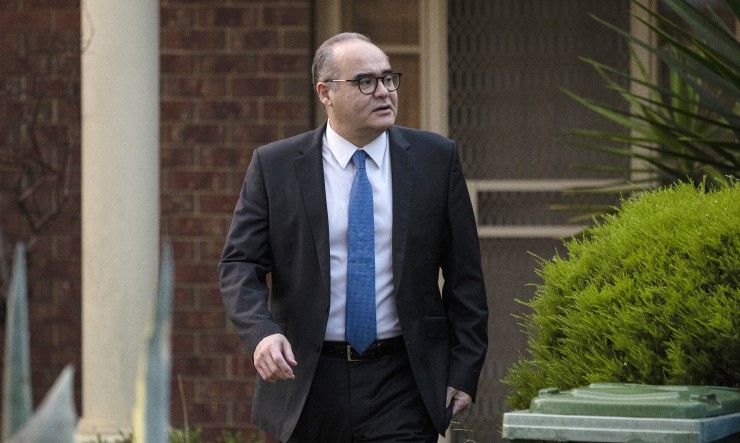 The squalid nature of the Victorian Labor Party, its rampant branch-stacking and cronyism, abuse of taxpayer funding and indifference to serving the public interest has been on display day after day over the past week at the hearings of Victoria’s Independent Broad-based Anti-Corruption Commission.

So has the complete lack of accountability for politicians’ spending, at both the Victorian and federal level.

The evidence from federal MP Anthony Byrne, staffers Ellen Schreiber and Adam Sullivan last week and factional player Rick Garotti yesterday about the activities of the moderate right faction and “war lord” Adem Somyurek has been a litany of every single negative stereotype ever held about politicians by cynical voters.

The evidence from Sullivan — about going to Somyurek’s cobwebbed, cockroach-infested, junk-filled office (which Somyurek’s father had a contract to clean) where employed electoral staff often failed to show and those who did had nothing to do — provided the perfect metaphor for a party detached from democratic politics and focused wholly on fighting internal battles.

Before Sullivan, Schreiber described working in Somyurek’s ministerial office where “portfolio work” was subordinated to factional warfare and the precious task of vetting new party members — getting your own faction’s through and trying to block others. Somyurek was twice minister for small business in the Andrews government and Schreiber made it clear that small business was regarded as a fairly trivial portfolio that needn’t by any means occupy the full-time attentions of a ministerial adviser.

How all of this carried on without Premier Daniel Andrews and his staff being aware is a mystery for the ages. It certainly says much about Andrews’ view of Victoria’s small business sector.

Byrne and the staffers detailed the extensive use of staffers, ministerial and electoral, for factional legwork — with the occasional direct misuse of resources such as stamp purchasing for factional work — all generously paid for by Victorian taxpayers and, in the case of Byrne, federal taxpayers. Yesterday Garotti detailed more ethnic branch stacking and extended the revelation of the misuse of resources to the trading of taxpayer-funded positions for factional allies.

Somyurek may have been atypical among Labor politicians but the system he exploited remains unchanged. Far too much trust is allowed to politicians in their management of taxpayer resources. Sullivan detailed how precisely no one in Victorian Labor was concerned about the infamous “red shirts” scandal in which taxpayers paid for staffers to do campaign work.

“If you were to say that that had a negligible effect on some senior Labor members,” Sullivan told the commission, “I think that would be a fair assessment.”

These are people who aren’t even abashed by a major political scandal that, but for the forbearance of Victorian police, should have led to prosecutions.

There is minimal systemic oversight of electoral or ministerial office spending either at the Victorian or federal level. The fact that Somyurek could leave his electoral office virtually unstaffed (as an upper house MP he had no direct “constituents”) despite receiving the same resourcing as lower house MPs serving communities tens of thousands strong points to a system designed for abuse.

And the misuse of ministerial staff for factional work shows not merely a lack of oversight of how politicians spend taxpayer money, but an inevitable consequence of the rise of political staffers ahead of public servants. As explicitly political staffers, ministerial advisers won’t merely approach policy and administration from a purely partisan perspective, but will pursue their political careers — inevitably by working in the interests of some more powerful than themselves — and be at constant risk of either engaging in, or being pushed into, intra-party conflicts. Yet they are paid entirely by taxpayers.

The only solution to the frequent misuse of staff for party purposes is an absolute liability offence of engaging in party work while employed on the public purse, and a requirement to repay all salaries provided, along with the requirement to notify relevant departments in writing of being asked to undertake party work during business hours, or on time in lieu.

It’s also clear that Labor can’t be trusted with its campaign database. Campaign Central, the tightly guarded database that it keeps on every voter, was misused for factional work, despite alleged safeguards like staffers having limited access and only being allowed to access data on voters in certain electorates (the latter was easily circumvented by using a login for the office of Victorian Senator Kimberley Kitching, whose electorate is notionally all Victoria).

Despite Labor strengthening its safeguards since the events being described at IBAC, it once again demonstrates that the exemptions the political parties have given themselves for their accumulation of private information are unjustified and ripe for abuse.

Why has this sordid mess all come out? For one reason only. Sullivan was quizzed on why so many people engaged in this sort of behaviour:

The only issue would be if someone were to blow a whistle or go to the authorities, something to that effect. No one was going to do that because if someone did there would be so many other skeletons in that person’s closet that someone else on the receiving end of that blowback could blow them out of the water, so to speak. So I suppose there was sort of a mutually assured destruction in the party — well, in the circle at that time. No one would go to the authorities about that sort of thing if they were a rational actor.

The problem was that Byrne decided to be an irrational actor and blow the whole lot up, including himself. And what a filthy mess he’s revealed in the Andrews government.