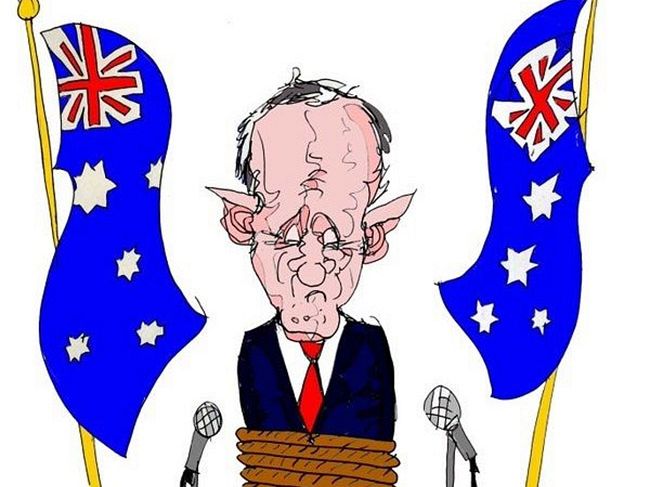 Shortly after the election of Malcolm Turnbull as Prime Minister, IA founder and publisher David Donovan wrote this piece condemning the new PM for destroying Australia’s future and yearning for a leader to bring in positive change.

No, I am talking about how limited his options are and how he, like Peter before that cock crowed, is constantly called upon to deny his conscience to keep the right of his Party – that is, most of it – on his side. Yes, Turnbull may be gushingly popular amongst the Canberra Press Gallery – who, as we all know, is also rather excruciating – but he is not popular amongst the pale, stale old men who stack the branches of the Liberal Party, many of whom regard Mal as little more than a Trotskyite.

Sadly, since becoming Prime Minister, sweet-smelling Malcolm Talcum has had to deny his allegedly progressive beliefs over same-sex marriage, over the “harsh” treatment of asylum seekers, and over the ETS and climate change. Yesterday, he went further when he was forced to respond to an open letter from 61 prominent Australians, who were calling on the Government to call a moratorium on new coal mines, as well as to take concerns over coal to UN climate talks being held in Paris later this year.

Turnbull did not respond by saying coal was “good for humanity”, like the “world’s great mind” occupying the hot seat before him. Not quite.

Instead, he added numerous extra words, as is our waffler-in-chief’s chief custom:

“You have to remember that energy poverty is one of the big limits on global development in terms of achieving all of the development goals, alleviating hunger and promoting prosperity right around the world – energy is an absolute critical ingredient. So coal will play a big part in that.”

All nonsense, of course. If we put the billions we use to subsidise King Coal into renewables research, we would probably soon be able to power the world sustainably. But, of course, coal funds the Liberal Party machine through donations and so we, the taxpayer, subsidise coal.

It’s just the way it works here — but that’s not even the most excruciating part.

“If Australia stopped exporting coal, the countries to which we export it would buy it from somewhere else. So there is absolutely quite a lot of coal around… so if Australia were to stop all of its coal exports it would not reduce global emissions one iota. In fact, arguably, it would increase them because our coal, by and large, is cleaner than the coal in many other countries.”

This is the argument of the heroin dealer. You know, the one that goes: If I stopped selling smack, they would just keep on buying it from someone else. Hey, it might even kill them, because the other dealer’s shit is cut and the stuff I’m selling is clean, man.

Excruciating. So excruciating. We need a prime minister who is prepared to rebel against the vested interests who fund his party and the greedy, knuckle-scraping old troglodytes who run it, not one who assiduously strives to save his own skin by appeasing them at every turn.

To add to the pain, we also saw Malcolm Turnbull announce yesterday the appointment of his new Chief Science Officer, Alan Finkel. This new Government science mouth is a staunch proponent of nuclear energy and fracking. I think we can safely now say what Malcolm’s solution to climate change will be — nuclear power stations and more pincushions dotting our precious farmland.

These are easy solutions for him because they are sources of energy owned and endorsed by the Liberal Party’s big business sponsors and their backroom boys, who are no doubt right now smoking cigars and nodding appreciatively into their brandies in private men’s clubs right across the country.

Of course, I don’t need to tell you that nukes and CSG are two sources of energy with massive risks should anything go wrong. Remember our irreplaceable aquifers — the ones so vital for our agriculture? Remember the disastrous tragedy of Fukushima, just a few years ago? And, of course, in the case of nuclear energy, there is – despite what anyone may try to claim – no truly safe way of disposing of its deadly waste, which effectively lasts forever. Still no way, despite the first atomic bomb being dropped on Japan over 70 years ago.

“Nuclear power is one hell of a way to boil water.”

If these are Turnbull’s so-called solutions, then I’d hate to see his problems. So much for his unctuous entreaties about Australia being “agile and nimble”, “encouraging innovation” and producing the “economy of the 21st Century”, because his solutions to our most pressing challenges – climate change and energy security – are stuck firmly in the middle of the 20th. Plus ça change, plus c’est la même chose.

If these are Turnbull’s solutions, then he is certainly not the solution this nation needs. He is clearly part of the problem.

Australia needs a leader who is strong enough to help the nation – and, indeed, the world – overcome its deadly addiction. Its out-of-control addiction to dangerous sources of energy. One that risks our way of life. One that risks us all.