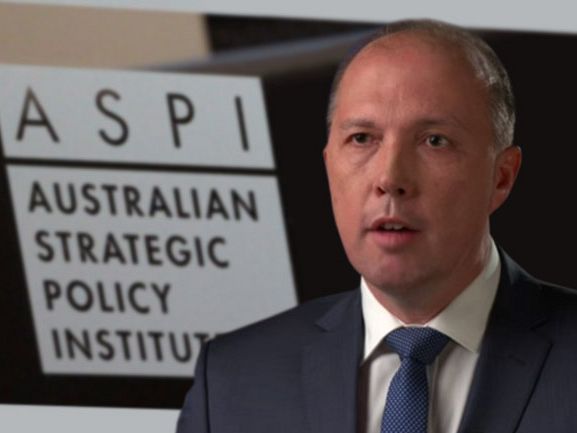 With some of the most prominent think tanks on defence and foreign policy receiving funds from companies that rely on war and threats of war, Australians are being fed vested interests masquerading as “independent” opinion, writes Dr Sue Wareham.

IN THE WORLD of medicine, disclosing financial links is fundamental. If a supposed expert on a particular drug fronted the media to extol the drug’s virtues without disclosing any financial links with the manufacturer, they would rapidly be brought into disrepute, as would any medical publication that reported the story without asking about conflicts of interest.

In the world of the arms trade and mainstream media, however, ignorance is bliss. Ask no questions of independent “experts” about their links and there will be no awkward truths to explain.

With vested interests at play, it is important that we question who is behind the headlong rush to war with China. The need to distinguish what is good for the war profiteers – and political careers – from what is good for Australia is taking on some urgency.

In a column in The Australian on 27 September, former Labor Senator Stephen Loosley lauded Defence Minister Peter Dutton for having the foresight to help the Australian Strategic Policy Institute (ASPI) establish a presence in Washington DC. In what passed for “full disclosure”, Loosley mentioned his past role as ASPI Chair and continuing role as a Senior Fellow at the organisation.

Full disclosure? Hardly. Loosley is also Deputy Chairman and Non-Executive Director of the multi-national weapons maker Thales Group, which, like all other arms producers, has a financial interest in Australian strategic policy. The only thing that can be said in Loosley’s favour is that “defence and security” commentary with financial interests behind it has become so normalised that the inherent conflict rarely rates a mention.

(On the subject of Thales, this was the company that put pressure in 2018 on former Federal Attorney-General Christian Porter to censor key parts of the auditor general’s report into the Thales Hawkei vehicle procurement process. The report warned that the $1.3 billion deal was not value for money.)

ASPI itself receives funding from Thales Australia and from Lockheed Martin, Northrop Grumman and Raytheon, all weapons manufacturing giants. Several corporate logos sit proudly on the ASPI website, along with ASPI’s claim to independence, the inherent contradiction being apparently lost on the organisation.

ASPI’s funders also include the U.S. State Department and Defence Department, which together contributed nearly $1 million in 2019-2020, along with smaller amounts from other foreign governments, looking suspiciously like the cardinal sin of “foreign interference”. Even more worrying is that with such funding from a nation that is nearly always at war, it is little wonder that ASPI’s rhetoric is increasingly belligerent towards Australia’s supposed new enemy, China.

Of similar concern is the U.S. Studies Centre (USSC), set up in 2006 at the University of Sydney, with $25 million funding from the Howard Government and in collaboration with the American Australian Association. As with ASPI, Northrop Grumman and Thales are among the partners and supporters. In 2020, when most universities could not qualify for JobKeeper payments, the USSC received $522,000 in such payments.

In any event, if Australia’s relationship with the U.S. is self-evidently a good thing, why does it need our taxes and other largesse to promote it? Whose interests are being served by such promotion?

Vince Scappatura, in his 2019 book The U.S. Lobby and Australian Defence Policy, wrote of the U.S. Studies Centre and its sister centre at the University of WA, the Perth USAsia Centre:

‘Together, these unashamedly pro-U.S. organisations dominate the public and elite ideas space with… commentary and analysis that more or less conforms to the alliance orthodoxy. Their views are amplified by sympathetic opinion-makers in the media.’

As Murdoch’s media continues to demonstrate.

The problem is, of course, not confined to those examples. Also prominent in Australia is the Lowy Institute, which includes among its funders and supporters Boeing, whose products include fighter aircraft, bombers and missiles.

And further afield, the grip of vested interests on “independent” defence and foreign policy research is stark. As just one example from the U.S., the Centre for a New American Security (CNAS) in Washington DC claims independence, while listing weapons maker Northrop Grumman Systems Corporation as one of its donors that contributed $500,000 or more in the year to 30 September 2020.

On nuclear weapons, a recent study by the International Campaign to Abolish Nuclear Weapons (ICAN) of think tanks from France, India, the United Kingdom and the United States, found that ‘almost all major think tanks working on nuclear weapon issues took money from companies involved in the nuclear weapons industry in 2020’. Further, ‘these companies don’t just donate money; key executives also oversee and advise several of these think tanks’.

One thing we won’t hear from ASPI, the USSC and their equivalents elsewhere is what a war with Australia’s official new enemy, China, would actually be like — not for the brave war planners and their grand geostrategic designs, but for the millions of victims. In that respect, the spruikers of war are like charlatans, promoting a new wonder drug but covering up its crippling side-effects and dismal prospects of “success”, whatever that means in modern warfare.

The time has come for the media to ask specifically about the funding behind commentary from “defence experts” before repeating it. The evidence shows that a declaration of “independence” can no longer be taken at face value.

Dr Sue Wareham OAM is President of the Medical Association for Prevention of War (Australia) and a board member of ICAN (the International Campaign to Abolish Nuclear Weapons) Australia.