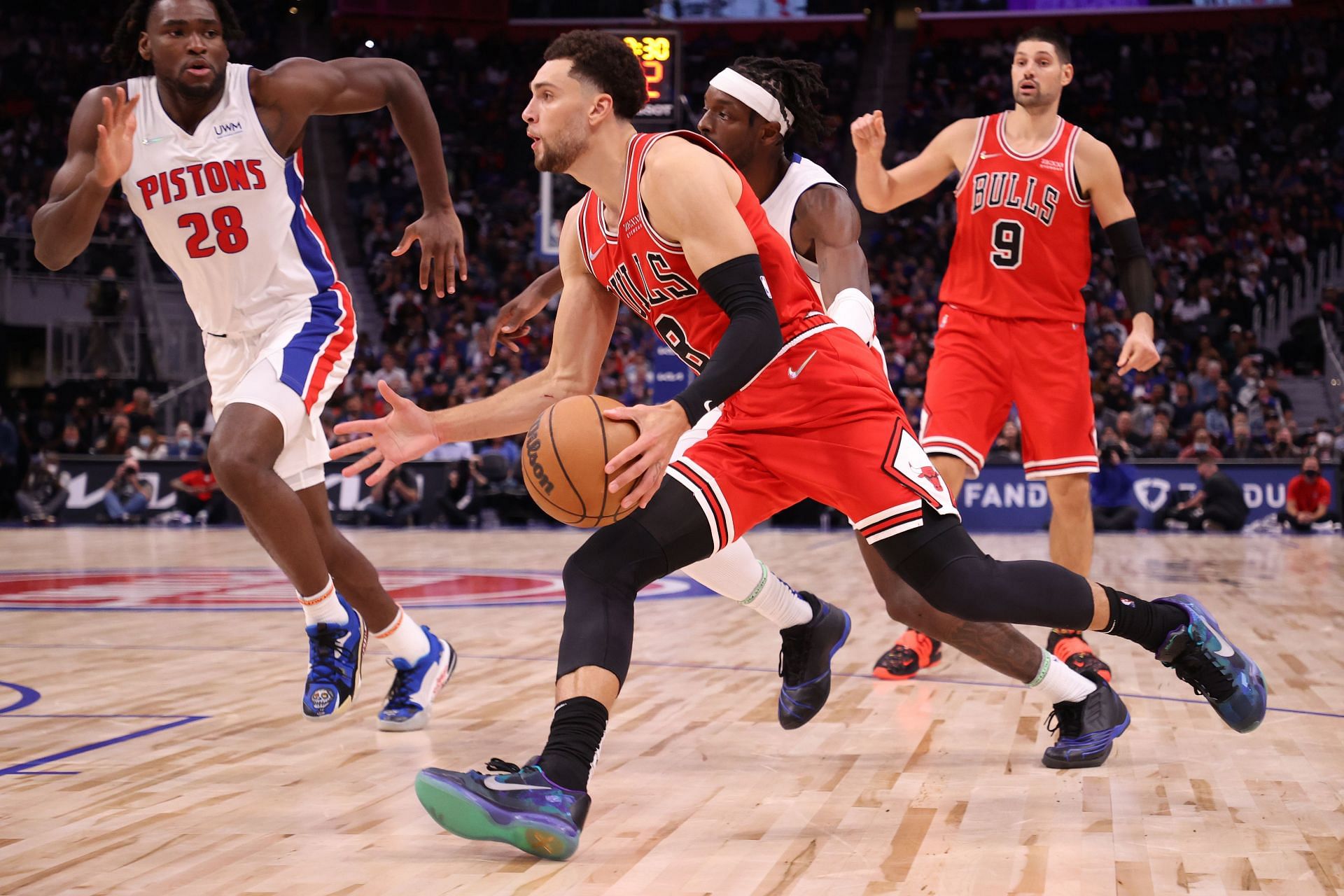 The Chicago Bulls have been very aggressive in the last couple of months to bring postseason excitement to a success-starved fan base.

After trading for Nikola Vucevic last season, the Bulls front office added formidable talent to their roster in DeMar DeRozan, Lonzo Ball and Alex Caruso. The ripple effect of these moves prompted NBA GMs to vote for the Windy City franchise as the Most Improved Team coming into the 2021-22 season.

Fans who were eagerly anticipating how the facelift of the Chicago Bulls would work were treated to a spectacle in the team’s preseason games. Except for a down-the-wire finish against the Cleveland Cavaliers in their third exhibition game, the Bulls were flawless and ran roughshod over their opponents.

The problem, however, was that the impressive performances happened during friendly games. It was unclear how the team will respond to real adversity in the regular season.

Final: Bulls beat Pistons, 94-88.
Chicago has now won 8 straight vs Detroit, dating back to Nov. 2019. This was Zach LaVine’s 2nd time with at least 30 in a Bulls season-opener joining MJ and Artis Gilmore as only Bulls to do this multiple times. He dropped 34 tonight.

Final: Bulls beat Pistons, 94-88.
Chicago has now won 8 straight vs Detroit, dating back to Nov. 2019. This was Zach LaVine’s 2nd time with at least 30 in a Bulls season-opener joining MJ and Artis Gilmore as only Bulls to do this multiple times. He dropped 34 tonight.

In their first regular-season game against the Detroit Pistons, who were sorely lacking in firepower, the vaunted Chicago Bulls’ new roster was in a dog fight from start to finish. The game perfectly demonstrated why caution should be exercised when measuring a team that underwent an overhaul, even if it seemed to completely mesh in the preseason.

The Chicago Bulls’ starting five could be one of the best in the NBA this coming season. On offense, they will most likely make a name for themselves. DeMar DeRozan, Zach LaVine and Nikola Vucevic are excellent offensive players who can light up the scoreboard any time.

If Billy Donavan rolls out Lonzo Ball, DeRozan, LaVine, Vucevic and Patrick Williams as first-stringers, it will be Williams who will likely do the dirty work of making life difficult for the opposing team’s best players.

In his rookie campaign last season, Williams had a defensive rating of 111.7. For a player who has the length and mobility to be a defensive force, he was sorely lacking in this area.

Although the game against the Detroit Pistons was a minute example, the 20-year old sophomore was quietly solid on his defensive assignments against the Pistons’ leading scorer Jerami Grant. He helped the Bulls limit Grant to an inefficient 8 for 25 shooting.

Williams posted a defensive rating of 97.6 in the game against the Detroit Pistons. His work on defense also forced Saddiq Bey into some tough shots. When Williams found himself on the perimeter, he was quick enough on switches and pick-and rolls to limit damage.

The Chicago Bulls will need every bit of Williams’ effort, determination and physical traits on defense to barge into the postseason.

#2 Lonzo Ball could really thrive playing for the Chicago Bulls

At first glance, Lonzo Ball’s 23 points, six rebounds and four assists were not earth-shattering or headline-grabbing. However, when he was on the floor, the offense ran smoothly for stretches. Obviously, Ball would have to adapt to his teammates’ quirks and tendencies to be more effective, but the signs are already there.

Lonzo Ball is just going to do so many good things for this team.

Lonzo Ball is just going to do so many good things for this team. https://t.co/JuJRIDAMEA

Four assists in over 33 minutes of play seemed lackluster and did not capture Ball’s contributions on offense. He had a couple of hockey assists that were not found on the stat sheet and directed plays even when he was not handling the ball.

Lonzo Ball was also a nuisance on defense. The total package he brings to the Chicago Bulls will greatly help them as they push for a playoff spot.

#1 Zach LaVine is all about business

The Chicago Bulls and Zach LaVine are at an impasse regarding his contract extension. Both parties have not agreed on a common ground to secure the All-Star guard’s services for the foreseeable future.

In reports that circulated before training camp started, it was mentioned that LaVine understood the business end of the deal. Consequently, it is believed that he will hold up his end of the contract by helping the Chicago Bulls win.

The former slam dunk champion has stood by his word that he was all about winning and helping the Chicago Bulls get that coveted playoff spot, at least for the time being. He led the team to a nail-biting win against the Pistons with a game-high 34 points, seven rebounds and four assists. His crucial conversions near the end of regulation dashed the Detroit Pistons’ hopes of a comeback.

Winning papers over a lot of issues in an NBA team. LaVine has made no secret of his desire to get into the postseason. If the Chicago Bulls fail to join the play-in tournament or do not win any of the top eight seeds, the 26-year-old could seek greener pastures.