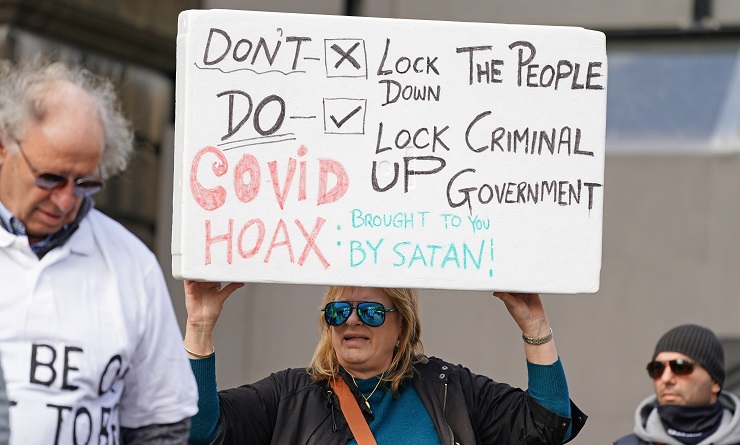 COVID-deniers and anti-vaxxers have been told they should opt out from the public health system if they are infected — by Victoria’s AMA, Guardian Australia reports. The fairly stark words came from state AMA president Roderick McRae and come as many Victorians emerge from lockdown today. Curfews are gone, some kids head back to school, and seated service in pubs, cafes, and restaurants is back, as ABC explains. But McRae, himself an intensive care physician, said many health care workers are already flogged from consecutive outbreaks and advised the “passionate disbelievers” to let “nature run its course” if they get infected in the eased restrictions. Ouch. But is that really the right message? City of Melbourne councillor Rohan Leppert tweeted it was a “reprehensible idea” while Georgetown Law immunology professor Alexandra Phelan called the words “a complete antithesis to public health”.

Meanwhile in Queensland, police are trying to understand how infected Gold Coast resident Duran Raman travelled to Sydney and Melbourne during the peak of each city’s outbreak before heading home, the Brisbane Times says. It is not clear when Duran, who is 34 and played for Broadbeach’s AFL team, contracted COVID on his interstate jaunt. Duran is on oxygen and so severely ill, the paper continues, that he hasn’t been able to speak to contact tracers, though they’ve pieced together some exposure sites. Friends reportedly told the Brisbane Times that Raman regularly posts anti-vaccination videos on his social media.

Australia has come last in our climate pledges and performance compared to 30 of our fellow developed nations, SBS News reports. The Climate Council report lined up our greenhouse gas emissions reductions per capita, along with our extraction and use of fossil fuels, against those of our global counterparts. The United Kingdom came first — in what seems like a utopian dream, radical new climate change commitments from their government will set the UK on course to cut carbon emissions by 78% (!) by 2035, BBC says. The Climate Council report’s author, Simon Bradshaw says “a commitment just to net zero by 2050 doesn’t catch us up with the rest of the world”.

It’s easy to forget amid all this Nats-Libs net zero hoohaa, that, for most developed countries (and every state and territory in this country), a target of net zero by mid-century is a foregone conclusion. Climate 200 founder Simon Holmes à Court didn’t miss when he told Assistant Minister for Industry, Energy and Emissions Reductions Tim Wilson on national TV that him distracting folks with net zero chatter was nothing but “tricks and lies”. “We’re going to be an absolute embarrassment when we get there,” Holmes à Court continued, considering Prime Minister Scott Morrison is not taking a new 2030 target to the climate summit. Meanwhile, the deputy prime minister is reportedly backing a plan that would see nine new coal mines in Gladstone, environmental groups say, as Guardian Australia reports.

Labor is on track to take the seat of Swan in Perth at the next election on a primary vote of up to 44% — that’s according to a new poll, The Australian ($) reports. It’s bad news for Scott Morrison, with former attorney-general Christian Porter’s seat of Pearce and Ken Wyatt’s seat of Hasluck also up for grabs in the west. And it’s at least partly down to Morrison’s squabbling with popular Premier Mark McGowan — the poll, which quizzed 800 people, found 60% thought Opposition Leader Anthony Albanese would do a better job of working with the WA government.

Wonder if Albo would be better at honouring transparency of government too? Guardian Australia reports that Morrison’s office delivered on less than half of all Freedom of Information requests within the lawful timeframe. That’s according to the Office of the Australian Information Commission’s (OAIC) annual report, who also found complaints about FOIs shot up 39% in the last financial year. Every week, FOI requests see important stories come to light in this country. One that springs to mind, as SBS reports: last month an FOI revealed that fewer than one in five people in our immigration centres were fully vaccinated — now, that has leapt to more than half.

As more than 5 million Victorians emerge from lockdown today, one might feel one — or all — or none — of the following: elated, anticlimactic, nervous, overwhelmed, isolated or even a bit numb. Kristin Naragon-Gainey writes for The Conversation that there’s no one-size-fits-all reaction to leaving lockdown, and that’s totally okay. “Reinventing a new daily routine takes effort, as it requires overriding our current habits and inertia,” she says. She continues that it helps to seek out a little “fun” — whatever that might mean to you — and to find support in friends, family and others.

Writer Daniel Lavelle says that, even if it doesn’t feel like it sometimes, there is life after loneliness. Lavelle says he felt ostracised since a child, and was battered around by job insecurity and homelessness in adulthood. During the pandemic, he lived in London and ruminated on his aloneness. But, as he writes rather beautifully for The Guardian, what he learnt was that loneliness can be what happens when we live in our heads for too long. Even if it feels a bit much, the beauty of reconnection can be an antidote to that. “Reconnecting with the world around you can help you escape yourself,” he says. Plus, he adds “it can be achieved by paying attention to something, anything, other than the noise between your ears”.

A nice hot coffee awaits you and the weekend is but a whisper away, folks. Happy Friday.

From a Nationals point of view, we will not be supporting James on this position and he can go and get fucked, simple as that.

The federal Coalition isn’t the only one at war, it seems. The Victorian Nationals Leader told shadow minister for equality James Newbury where to go after Newbury declared the party would not pursue amendments to a bill that bans gay conversion therapy. Earlier this year, the Victorian Coalition voted to tweak the bill after faith groups raised concerns about it. The new law sees hefty fines or jail time for anyone caught trying to change someone’s sexuality.

“It’s not just Porter who is hypersensitive about the exposure of his mystery donors. Yesterday we found out that Scott Morrison is too. He humiliated Speaker Tony Smith rather than allow Porter’s blind trust declaration to go to the House of Reps’ Privileges Committee. Smith had found that there was a prima facie case for Porter’s referral for a breach of the Reps’ resolution on the declaration of members’ interests.

“Of course Smith did, because it was blindingly obvious that Porter’s alteration to his register of interests created a perception of conflict of interest. Morrison prevented Porter’s referral, an unprecedented act — and richly symbolic of just how odiously corrupt and contemptuous of scrutiny this government is.”

Rudd: Morrison should not be attacked for his faith. But he should tell us how it affects his politics

“Pentecostals can be found across the political spectrum and, as in most denominations, individual worshippers are good, honest folks with a variety of political backgrounds who also may accept or reject different tenets of the Pentecostal tradition. However, the worldview of a number of Pentecostal leaders can often be well outside the Australian political mainstream.

“… Hillsong founder Brian Houston’s book You Need More Money infamously linked divine blessing to being a ‘money magnet’. This is often accompanied by a deeply fundamentalist attitude to questions of human sexuality and reluctance to embrace basic science on critical questions such as climate change and human evolution.”

Anti-vax lawyer crowdfunds challenge to his suspension for crowdfunding

“So far, Buckley has raised $10,810 in the 13 hours since the GoFundMe page’s creation. This brings the total money he has crowdfunded for legal challenges to more than $850,000, including more than $100,000 sent directly to his bank account and not held in trust.

“Buckley is one of a handful of lawyers and organisers who have collectively raised more than $1 million to challenge vaccine mandates and other COVID-19 public health restrictions, while also sharing COVID-19 misinformation. These online fundraisers, shared widely in anti-vaxxer and online conspiracy groups, have all been unsuccessful so far.”

Russia: Country where majority of people refuse to get vaccinated (news.com.au)

Revised draft curriculum gets C, must try harder — Alan Tudge (The Australian) ($): “The biggest problem, though, was in the draft history curriculum. It gave the impression nothing bad happened before 1788 and almost nothing good has happened since. It downplayed our Western heritage. It omitted significant figures in our history such as Menzies, Howard and Whitlam. It almost erased Christianity from our past, despite it being the single most important influence on our modern development, according to our greatest living historian, Geoffrey Blainey. It introduced ridiculous concepts such as asking Year 2 students — 7-year-olds — to ask whether statues could be deemed racist …

There are no real climate leaders yet — who will step up at Cop26? — Greta Thunberg (The Guardian): “In fact, we are speeding in the wrong direction. 2021 is currently projected to experience the second-biggest emission rise ever recorded, and global emissions are expected to increase by 16% by 2030 compared with 2010 levels. According to the International Energy Agency, only 2% of governments’ ‘build back better’ recovery spending has been invested in clean energy, while at same time the production and burning of coal, oil and gas was subsidised by $5.9tn in 2020 alone.

“The world’s planned fossil fuel production by the year 2030 accounts for more than twice the amount than would be consistent with the 1.5C target. This is science’s way of telling us that we can no longer reach our targets without a system change. Because doing so would require tearing up contracts and abandoning deals and agreements on an unimaginable scale — something that is simply not possible in the current system. In short, we are totally failing to even reach targets that are completely insufficient in the first place.”