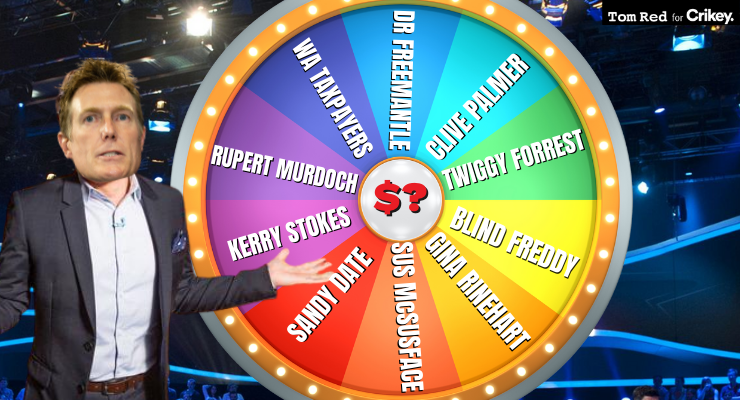 The identity of Christian Porter’s anonymous donors for his disastrous attempt to sue the ABC is clearly an extraordinarily sensitive matter.

Porter has already wrecked his political career in order to keep their identities secret; his plan to simply declare he’d been handed the money and think that was good enough for disclosure purposes was deemed, even in the most corrupt federal government since Federation, to be not good enough.

Who are his donors? Prominent billionaires? Media moguls? Organised crime? The Chinese government? Vladimir Putin? Who knows. Not even Porter, he claims, and he doesn’t want to know.

It’s not just Porter who is hypersensitive about the exposure of his mystery donors. Yesterday we found out that Scott Morrison is too. He humiliated Speaker Tony Smith rather than allow Porter’s blind trust declaration to go to the House of Reps’ Privileges Committee. Smith had found that there was a prima facie case for Porter’s referral for a breach of the Reps’ resolution on the declaration of members’ interests. Of course Smith did, because it was blindingly obvious that Porter’s alteration to his register of interests created a perception of conflict of interest.

Morrison prevented Porter’s referral, an unprecedented act — and richly symbolic of just how odiously corrupt and contemptuous of scrutiny this government is.

The Privileges Committee isn’t a senate committee, or chaired by an independent or an opposition MP. It’s chaired by a government MP — Russell Broadbent — and the government has the numbers on the 11-person committee. But even the prospect of Porter being examined by a Coalition-controlled committee was too much for Morrison.

Perhaps the prospect of Broadbent — a veteran MP of decency, substance and independence — chairing the inquiry filled the smirking, amoral vacuum we call a prime minister with horror, redoubling his pathological hatred of accountability.

Just who are Porter and Morrison protecting, sufficient that one will sacrifice his ministerial career and the other will throw his speaker under a bus? Why are their identities worth hiding at such great cost?

That, surely, is the most fascinating question in federal politics — not the climate policy circus of shit-flinging apes that is the National Party or Morrison’s latest effort to encourage everyone to forget the debacle of the vaccine rollout.

But it appears to be of zero fascination to much of the press gallery. The print media virtually ignored the overruling of Smith, despite its unprecedented nature and what it revealed about the government’s sensitivity about Porter’s donors.

Journalists, editors and producers still retain an institutional power to decide what qualifies as a “yarn”, and what doesn’t. And Morrison’s protection of Porter was deemed to be not yarn-worthy by newspapers — despite having all the ingredients of one, including a clear narrative of cover-up and political personalities.

Is it that the corruption and hatred of accountability that marks the Morrison government is now so routine that it doesn’t warrant coverage? That Morrison and his cronies are expected to behave this way, so it’s unremarkable when they do? Is this how corruption and cover-ups become normalised at the highest level of politics, with dozens of small decisions about what’s newsworthy in media bureaux?

Still, just because a question is ignored doesn’t make it go away: who are Porter and Morrison protecting at such cost, and why? What leverage or power do these donors have to elicit such protection? What else can they demand?

This is a thoroughly squalid government, the worst ever seen in Canberra. And its puppetmasters deserve outing.