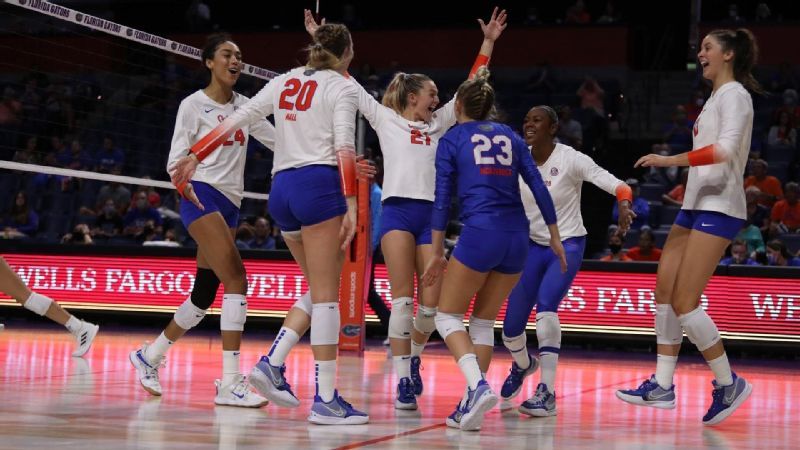 TUSCALOOSA, Ala. – The No. 23 Florida volleyball team topped the Alabama Crimson Tide in straight sets on Wednesday night in Foster Auditorium. UF has now won 59 consecutive sets against Alabama.

UF took the first set 25-17 and followed with a 25-19 victory in the second frame. Florida clinched the match with a 25-22 win in the third and final set.

The Gators had an incredibly balanced offensive attack against the Crimson Tide, with six players registering at least one kill. Florida was led by Thayer Hall on the offensive front, who posted 11 kills on the evening. Merritt Beason pitched in an eight-kill performance of her own, while T’ara Ceasar added six in the three-setter.

Bre Kelley posted a career-high five kills on the night on a .625 clip, while Lauren Forte (3) and Marlie Monserez (2) combined for five kills.

Monserez captained the offense, dishing out 29 assists and leading the team to a .295 hitting percentage.

As a team, the Gators held Alabama to a .106 clip and notched 10.0 blocks. Kelley was a dominant force at the net in her first start, grabbing a career-high and a team-high six blocks on the evening. Beason added four, while Ceasar and Forte each recorded three blocks apiece.

Florida’s backcourt defense was led by Elli McKissock, who registered 13 digs in the match. Ceasar followed with 10 of her own, while Hall was just one dig away from a double-double, recording nine on the night.

The Gators are off until Oct. 30, when the team travels to Columbia, Mo. to take on the Missouri Tigers. First serve is slated for 6 p.m. ET on SEC Network +.

“We saw some really great performances tonight, especially out of our younger players. It was a great learning experience on the road, playing a team coming off a week-long break.”

The Gators are off until Oct. 30, when the team travels to Columbia, Mo. to take on the Missouri Tigers

First serve is slated for 6 p.m. ET on SEC Network +