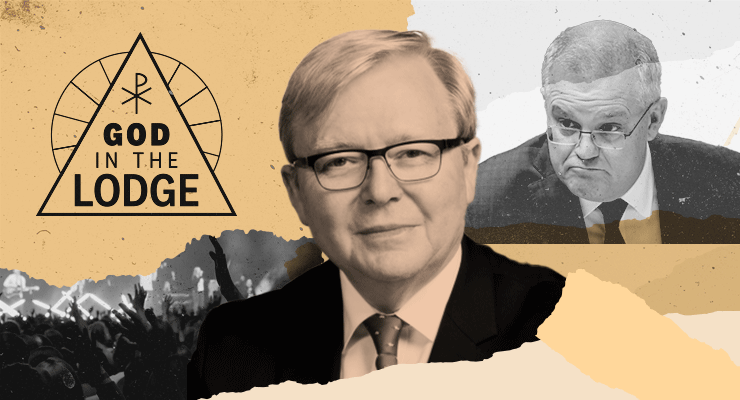 This story is part of a series. For the full series, go here.

But when we start asking questions about Scott Morrison’s religious beliefs and their impact on his political behaviour, some Australians start to feel nervous — as if they are intruding on an entirely private domain. As a fellow God-botherer — indeed, as someone who attended the same Christian fellowship as a member of Parliament — let me assure you that it is wholly legitimate to want to understand what drives your prime minister.

There is nothing unreasonable, let alone anti-Christian, about having an open and honest discussion about the role of faith in politics, so long as this debate is grounded in evidence, fact and reason.

In Morrison’s case, the reasons to have this debate are manifold. The prime minister is an ideological chameleon who follows the prevailing winds of polling on most aspects of public policy. His wholesale junking of any semblance of fiscal or economic conservatism is just one case in point. Indeed, his only consistent stance appears to be that he is a devout Pentecostal who draws political inspiration from that faith.

Morrison was eager to play Christian identity politics by inviting cameras into his church during the last election campaign. But he has steadfastly refused to explain how his politics are informed by his Pentecostal faith — a branch of the Christian family tree about which most Australians, even most practising Christians, still know very little.

If Morrison is a thoughtful Christian, it shouldn’t be difficult for him to fill in the detail. When I was in opposition, I wrote a 6500-word essay on faith in politics because I believed that, as a prospective national leader, voters deserved to know what they might be buying. There is no reason Morrison shouldn’t do the same — unless, of course, he thinks that Australians won’t like the answers.

Pentecostals can be found across the political spectrum and, as in most denominations, individual worshippers are good, honest folks with a variety of political backgrounds who also may accept or reject different tenets of the Pentecostal tradition. However, the worldview of a number of Pentecostal leaders can often be well outside the Australian political mainstream.

These leaders often preach a highly individualised “health and wealth gospel” that if you are godly, then you will also be healthy and wealthy. For example, Hillsong founder Brian Houston’s book You Need More Money infamously linked divine blessing to being a “money magnet”. This is often accompanied by a deeply fundamentalist attitude to questions of human sexuality and reluctance to embrace basic science on critical questions such as climate change and human evolution.

Australians should not feel intimidated about asking questions about Morrison’s relationship with Houston, whom he publicly describes as his spiritual mentor. Morrison has a well-known blind spot where Houston is concerned. In 2017, a royal commission found the preacher did not report his father’s admissions of child sexual abuse to police and ignored other church rules to protect him. Despite this, the prime minister sparked a minor international incident by attempting to secure Houston an invitation to Donald Trump’s White House. After he was rejected, Morrison evaded questions about whether he had even sought the invitation.

Houston has since been charged by NSW Police with concealing abuse (his lawyer says he will plead not guilty). This is but one of a series of troubling allegations raised against prominent Hillsong pastors around the world in recent years.

Australians — progressive and conservative, believers and non-believers — treasure our secular democracy and fear it being chipped away by the sort of religious fundamentalism seen in parts of the US Congress. This is not an unrealistic fear, given how Pentecostal churches have become an active recruiting ground for conservative factions of the Liberal Party — a self-appointed God’s Army intent on pushing their party further to the far-right and further marginalising the dwindling band of secular Liberals on the centre-right.

Sadly, instead of leading through openness and honesty about his religious beliefs, Morrison has left Australians in the dark to speculate about his worldview by interpreting grainy iPhone footage of his remarks to the Australian Christian Churches earlier this year. And that secret speech causes me some concern about Morrison’s respect for the separation of church and state. As prime minster of a secular state, you don’t give secret speeches to any group.

First, Morrison in that speech spoke about physically involving Australians in religious rituals, such as laying on of hands, without their consent. When the prime minister tours natural disaster shelters, he is there in his secular office, not as the nation’s high priest. If he wants to lay hands on people to impart the healing power of prayer, he can ask their permission; that he doesn’t seek consent implies he already knows how they might react.

Second, Morrison expressed the view that humans can’t fix the world’s problems; it is God’s responsibility, and what the world simply needs is the growth of the church. At the very least, this logic may explain Morrison’s disinterest in effective climate action. It could also hint to Morrison’s belief in the apocalyptic tradition among some Pentecostals that political action to resolve human or environmental problems is redundant simply because Christ’s eventual return will herald the end times. When voters cast their ballots, they deserve to know whether Morrison believes mortal problems can be solved by mortals.

Third, there is a broader question about how Morrison views the relationship between his office and God. Morrison’s speech suggests he identifies with the kings and prophets of the Old Testament who claimed God spoke to them directly. Morrison’s speech recalled receiving a message from God through a painting of an eagle during the last election campaign, reassuring him of divine support in his partisan struggle against the Labor Party. Again, Australians deserve to know from Morrison: how does he believe God communicates with prime ministers?

Morrison shouldn’t be attacked for his faith; rather, he should have the political courage and moral fortitude to open up to Australians about how it informs his worldview. It shouldn’t be hard — unless, of course, he has something to hide.