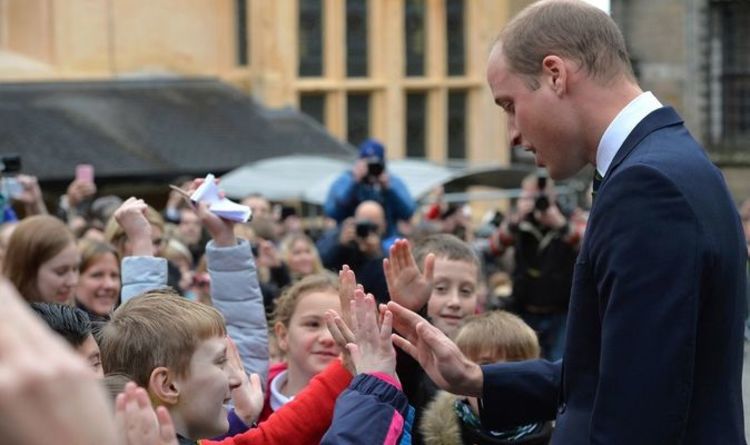 William, 39, has resumed royal duties this month, after a summer holiday spent at Balmoral and the Isle of Scilly. Last Sunday, the Duke of Cambridge received widespread praise after putting on the inaugural Earthshot Prize awards ceremony at the iconic Alexandra Palace in London. William, who in recent years has shown a growing commitment to tackling the climate crisis, called on society to “unite in repairing the planet”.

The Earthshot Prize, which was created by the Duke, awards people who are offering the most inspiring solutions to environmental issues facing the planet, with five winners receiving £1 million to develop their projects.

William is among the most popular members of the Royal Family, alongside his wife Kate, Duchess of Cambridge, with the pair widely considered crucial in modernising the Firm.

In an adorable unearthed video, William’s massive popularity among the younger generation is displayed, as the Prince is mobbed by children from Allan’s Primary School in Scotland.

The Duke visited the school in Stirling in 2016, as part of his role as patron of the Thin Red Line appeal, which sought funding for the development of the Argyll and Sutherland Highlanders Regimental Museum located at Stirling Castle.

Read More:Meghan Markle backed by US Congressman over ‘powerful’ move

In the video, William dishes out high-fives and handshakes after being mobbed by the primary school children.

He then leans over to make polite small talk with the ecstatic group, asking them what they had done over the half-term holiday.

Finlay Small, nine, from Allan’s Primary School, told the Scottish Daily Mail of the meeting: “I’m very happy because I got to high-five him.

Another account, LoveforCambridg, said: “The kids absolutely love the Cambridges!

“They are never asked to hug them and/or William and Catherine are never desperate for them to do that.

“They let the kids be natural, be free, as it should be.”

The Princess of Wales, who tragically died in a car crash in August 1997, would frequently visit schools and hospitals. She always displayed empathy for those she met.

It was also revealed by a Kensington Palace curator in June this year that Diana would never wear hats for events with children – as you “can’t cuddle a child in a hat”.

Curator of the Royal Style in the Making exhibition Claudia Acott Williams told Lifestyle the Princess would be careful in choosing her outfits while meeting children.

A floral piece, by designer David Sasson, became known as her “caring dress” because “she knew children loved the bright floral pattern”.

Scott Williams said the Princess would also wear “big costume jewellery because she would pick children up and they would play with it.”

The curator added: “She understood how what you were wearing could really convey warmth.

“It could reinforce hierarchy or it could undermine hierarchy to create more of a relationship.”