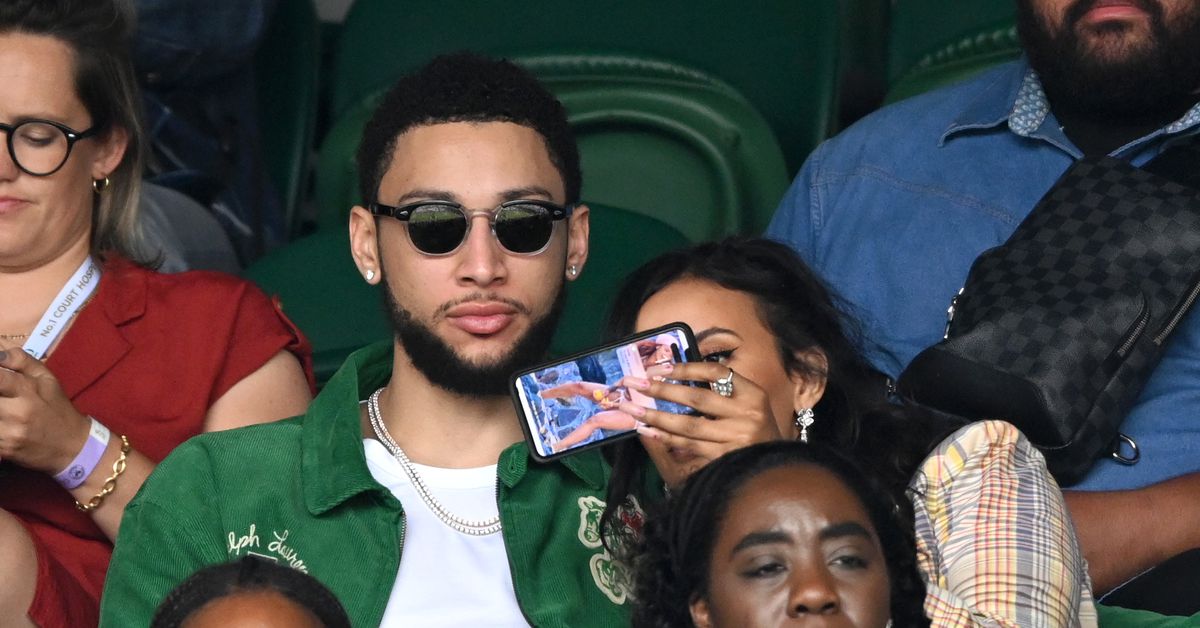 Ben Simmons has been considered a precocious talent since he left Australia for Florida prep powerhouse Montverde Academy in 2013 and established himself as the No. 1 recruit in the country. Simmons spent one up-and-down season at LSU before entering the 2016 NBA Draft, where the Philadelphia 76ers took him with the top pick.

Simmons missed his entire rookie season with a foot injury, but when he returned he was immediately a star, and he lifted the Sixers up with him. Philadelphia has made the playoffs in all four years Simmons has been on the court, and he’s been an All-Star three times.

What started out as a promising relationship has since deteriorated. The relationship between the 25-year-old forward and the team became damaged during the 2021 NBA Playoffs, and at this point it may be beyond repair.

Simmons has requested a trade from the 76ers, and it’s been the biggest storyline in the league since the end of the 2021 season. Simmons still isn’t on the floor with games underway for the new season. Here’s how we got here.

The Sixers hired Daryl Morey in the offseason, and he immediately made some solid trades, acquiring Seth Curry and Danny Green in place of Al Horford and Josh Richardson. Morey still had one big move he wanted to make: trading Simmons for James Harden.

The Sixers and Nets were the finalists in the Harden sweepstakes. The Sixers thought they had Harden, reportedly informing Simmons to watch out for a trade. Ultimately, Houston chose Brooklyn’s package of draft picks over Philadelphia’s offer. There were reports that the Sixers were unwilling to part with rookie guard Tyrese Maxey in the deal.

The Harden trade saga dragged over the first three weeks of the season. By the time it was over, the Sixers were already off to a promising start.

The Sixers and Simmons both had a great regular season

It’s hard to remember now, but the Sixers were a popular pick to represent the Eastern Conference in the NBA Finals at the start of the 2019-2020 season. Instead, the team’s experiment with Horford never worked, Philadelphia fell to the No. 6 seed in the playoffs, and they were swept in the first round of the bubble by the Boston Celtics.

While expectations were lower for the Sixers the next year, the team proved to be way better despite failing to acquiring Harden.

The Sixers finished the season at 49-23 with the No. 1 seed in the East. Joel Embiid was in contention for the MVP all season, and ultimately finished No. 2 behind Nikola Jokic. Ben Simmons turned in another All-Star season, finishing the year with averages of 14.3 points, 7.2 rebounds, 6.9 assists, and 1.6 steals per game. He was in contention for the Defensive Player of the Year award all season.

Here are some of Simmons’ best defensive highlights.

Simmons ultimately finished second in Defensive Player of the Year voting behind Rudy Gobert. He had established himself as one of the league’s best defenders and one of its better young players. As the Sixers entered the playoffs, there were no real signs of the upcoming tension.

It’s not like Simmons is always bad in the playoffs. He was pretty great in the Sixers’ first round series against the Wizards.

Simmons averaged 14.8 points, 10.2 rebounds, and 9.2 assists as Philly won the series in five games. Watch these Game 2 highlights — where Simmons finished with 22 points, nine rebounds, and eight assists — and you’d think he was a clutch playoff performer.

While Simmons played well in the series, he did struggle to make his free throws. He shot just 10-for-28 from the foul line during the series.

The Sixers advanced to face the Atlanta Hawks in the second round after the Hawks upset the Knicks. The Sixers would have home court advantage against Atlanta and a clear path to the Eastern Conference Finals against whoever survived the Bucks-Nets showdown on the other side of the bracket.

Ben Simmons melts down vs. the Hawks in the playoffs

The Sixers were a heavy favorite against the Hawks heading into the series, but Atlanta quickly proved they weren’t going to roll over with a 128-124 win in Game 1. Simmons was solid in the opener, finishing with 17 points and seven assists on 7-of-7 shooting from the field. There was only one problem: he shot only 3-of-10 from the foul line.

The Sixers would win Game 2 and Game 3 to take control of the series. The Hawks would win Game 4 and Game 5. Along the way, Simmons’ free throw shooting was becoming a major liability, and he was tentative to even attempt a field goal in the fourth quarter of games. Philly won Game 6 anyway to force a Game 7, and that’s when things got really bad for Simmons.

Late in the fourth quarter of Game 7, Simmons passed up a wide open dunk with a chance to tie the game.

The Sixers never recovered. The Hawks won Game 7, and advanced to the Eastern Conference Finals. After the game, 76ers head coach Doc Rivers and superstar teammate Joel Embiid both essentially threw Simmons under the bus.

Here are the quotes from Rivers and Embiid in the immediate wake of the loss.

“I don’t know the answer to that right now.”

-Doc Rivers after being asked if Ben Simmons could be a point guard on a championship team. pic.twitter.com/rw51V7rkRE

Embiid said he thought the turning point in the game was when Simmons passed up the open dunk.

Simmons only shot 32.7 percent from the foul line in the series.

He didn’t attempt a fourth quarter field goal in five of the seven games against the Hawks:

The 76ers open up trade talks ahead of the draft

Simmons’ agent Rich Paul met with the 76ers brass shortly after the end of the season. From ESPN’s Adrian Wojnarowski on June 24:

Paul engaged the Sixers on whether it makes sense to work together to find a trade before the start of next season, but no request was made and the sides are expected to continue talking ahead of the July 29 NBA draft and August free agency, sources said. The 76ers are committed to keeping Simmons as a central piece of their franchise, sources said.

The Sixers opened trade talks on July 13, according to Shams Charania of The Athletic. If another team wanted Simmons, he wasn’t going to come cheap. Charania reported Philadelphia was seeking an All-Star player in return.

It was easy to speculate the Sixers were waiting for Bradley Beal or Damian Lillard to become available. Only one problem: neither player hit the trade during the offseason despite plenty of rumors.

Simmons officially requests a trade, and says he will not show up to training camp

From the Philadelphia Inquirer on Aug. 31.

In a meeting with the 76ers last week in Los Angeles, Simmons told team co-managing partner Josh Harris, president of basketball operations Daryl Morey, general manager Elton Brand and coach Doc Rivers that he no longer wants to remain a Sixer, according to multiple sources.

Sources said the three-time All-Star also does not intend to report to training camp.

Simmons was a holdout as the Sixers started training camp despite having four seasons left on his contract. Rivers, Embiid, and Tobias Harris spoke of wanting Simmons to return, but it didn’t matter. Simmons’ side continued to leak reports through the media that he was done with Philly. One leak just before camp focused on his relationship with Embiid. The Athletic wrote: “As (Simmons) sees it, sources say, the organization’s choice to build its basketball ecosystem around Embiid’s style simply isn’t conducive to the way he needs to play.”

Embiid responded after a practice, saying the Sixers had always been built around Simmons’ needs. Here’s the full quote from Embiid:

Joel Embiid, who does note the Sixers are better with Ben Simmons around, says today that report suggesting they’re not a fit together is “borderline disrespectful” to other guys on the team in a wide-ranging answer pic.twitter.com/UUeu5xtNAK

As the Sixers opened the preseason and Simmons continued his holdout, the team did not pay him the $8.2 million he was owed.

Reporting with @WindhorstESPN and @BobbyMarks42: Sources confirm the 76ers have not paid Ben Simmons the $8.2 million he was owed today. The money has been put in an escrow account, & any fines accrued by him for not showing up will be deducted from that amount moving forward.

ESPN’s Bobby Marks reported Simmons would lose $227,613 for each game missed, with the money coming out fo the $8.2 million the team was withholding.

Simmons shows up to camp without telling the Sixers

On Oct. 11, Simmons showed up to Philadelphia. The team had no idea he was going to report.

Sources: Sixers were unaware Simmons was flying into Philadelphia today. The organization was in constant contact with agent Rich Paul, but Simmons simply showed up at arena to take his Covid test prior to Sixers-Nets tip — and that’s when team officials knew he was in town. https://t.co/j3cGnC6mgG

Even though Simmons had arrived, he had not committed to being part of the team. ESPN reported Simmons had already lost nearly $1 million in fines to this point.

Here’s the first footage of Simmons at Sixers camp this year. He was seen wearing sweatpants and going through drills with his phone in his pocket.

Simmons gets kicked out of practice, and suspended for one game

Simmons was kicked out of practice the next day, and later suspended one game by the team. Rivers reportedly asked Simmons to participate in a defensive drill, and Simmons refused:

Rivers then told Simmons he should go home, and Simmons dropped the ball and left.

Simmons didn’t go through a planned individual workout, and reported back soreness

Simmons has yet to fully engage in a Sixers practice. He bypassed an individual workout on Thursday due to tightness in his back. Philadelphia’s medical staff has cleared Simmons, but his status remains up in the air. Simmons said he is not ready to return to the team mentally.

Sources: 76ers All-Star Ben Simmons is currently not mentally ready to play for the team and was receiving treatment on his back today due to ramp up process. He will miss Friday’s home opener vs. Nets and is not expected to play for an undetermined period of time.

Morey tells fans to ‘buckle in’ over Simmons situation

Morey gave his first public comments on the Simmons saga during a radio interview on Thursday. It doesn’t seem like this situation is going to end any time soon. These quotes are via NBC Sports Philadelphia:

“So people should buckle in. This is going to go for a long time, because my only job is to help us have the best chance to win the title. Ben Simmons is a difference maker, so if we can get him back, he will help us win the title. If we can trade Ben Simmons for a difference maker, we will do it. I think that’s best for everyone in this situation.”

“You guys think I’m kidding,” he said. “I’m not. This could be four years. The conditions that I’m pointing out to you don’t change. Unless Ben Simmons is traded for a difference maker, we’re in the prime of (Joel Embiid’s) career. We have to get back either Ben Simmons playing well for us, who helps us win the championship, or we have to get back a difference maker for Ben Simmons — or this could be four years from now and we’re still like, hey, we took the best shot at it we could.

“So this could be four years. This is not a day-to-day thing. This is every day we’re going to expect Ben Simmons to be back here, or we’re trading him for a difference maker. There’s no other outcome that doesn’t materially hurt our chance to win the championship in Joel Embiid’s prime.”

We’ll update this story as it develops.