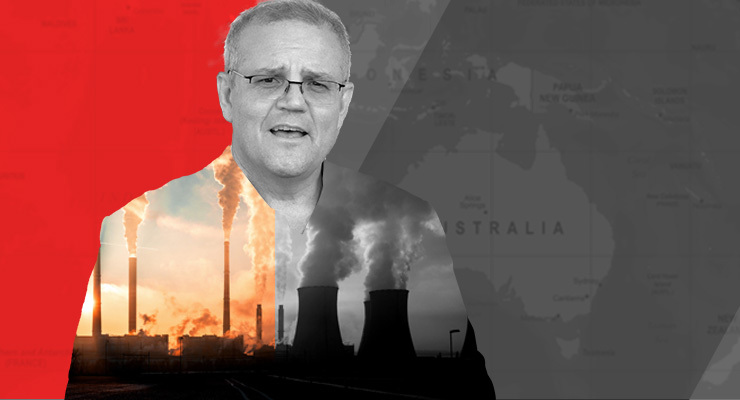 The outline of the government’s climate policy is now clear, even if some detail remains to be filled in. It will involve an overall increase in Australia’s total greenhouse emissions as it looks to take advantage of continuing use of fossil fuels — and coal in particular.

Documents leaked to Greenpeace from the International Panel on Climate Change’s (IPCC) process to determine options to reduce emissions show the Morrison government’s strategy for preparing for more concerted international action on emissions abatement. During the drafting stage of the report, officials from Angus Taylor’s Department of Industry have:

Along with the decision to spend at least $3 billion on a coal haulage rail line to Gladstone, and Environment Minister Sussan Ley’s now-routine approval of coal mine expansions, the strategy of Scott Morrison and Barnaby Joyce now seems clear. The government will elevate carbon capture and storage as a high priority carbon abatement method — despite its complete failure as a viable technology — in order to justify an increase in Australia’s coal exports, which will be subsidised by taxpayers via the loss-making inland rail line and its extension to Gladstone.

The emissions from coal exported to other countries — Scope 3 emissions — are not counted against Australia’s overall emissions. This will enable Morrison and Joyce to pursue an overall increase in emissions produced by Australia — including from the use of our coal in other countries — while still claiming to be working toward “net zero”.

Significantly, Australia’s demand that it not be on the list of major coal producers also points to an awareness by Taylor and Morrison of the tension between pretending to support net zero by 2050 and actively pushing higher coal exports. Being named as a major coal producer will be a reminder to the international community that whatever the government might say, it is determined to push up total greenhouse emissions by continuing to support coal.

The government’s hostility to it being pointed out that fossil fuel companies have dictated climate policy in Australia points to another sensitivity — that it’s become clear internationally how fossil fuel donors to the Liberals and Nationals control and often literally draft energy policy.

The strategy also underlines just what a farce and a pantomime the last fortnight of debate over the Nationals’ position on net zero really is: the Coalition is united on a plan to sell more coal and gas and pump more CO2 into the atmosphere, for the benefit of donors and allies like Santos, Woodside, Origin, Whitehaven Coal, Clive Palmer and Gina Rinehart.

The 2050 net zero target isn’t even a too-little-too-late ticket to get into Glasgow. It’s a distraction from the real agenda of more fossil fuels.