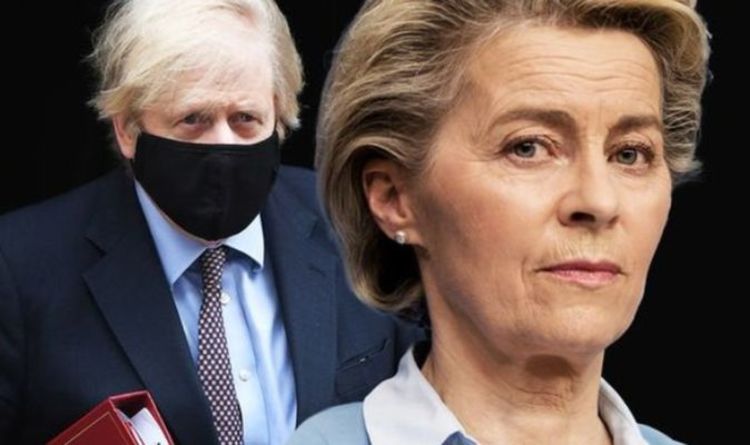 Simon Coveney warned EU negotiations with the UK over the Northern Ireland Protocol may finish at the end of the year if no progress is being made. The Irish Foreign Minister said there is only a finite “window” within which the EU is willing to find solutions to the problems caused by the post-Brexit agreement in place for Northern Ireland.

London and Brussels are currently locked in an intense round of negotiations in the coming weeks after European Commission vice president Maros Sefcovic unveiled a range of proposals aimed at cutting the red tape the protocol has imposed on moving goods from Great Britain to Northern Ireland.

However, the plan did not include the removal of the oversight function of the European Court of Justice (ECJ) in the operation of the protocol – a key UK demand.

Mr Coveney added: “I think EU has shown a real appetite for compromise, and they have consciously avoided creating tension.

“I can’t say the same in terms of the British government’s approach.

“I think that window is on offer now to the British Government if they want to use it to find a way of implementing the protocol in a way that responds to the vast majority of the issues and problems that have been raised.

“It’s up to the UK Government, I think, to take that window and we’ll have to wait and see how that progresses in the next few weeks.

“I can’t tell you when the EU will decide that that approach is getting us nowhere if there’s no agreement.

“But certainly I think there’s a window between now and late December, when the EU, I think, will be open to continuing dialogue and trying to find a way of making this work.”

The Irish Foreign Minister admitted that frustrations remain about the fact the role of the ECJ has become a red line.

He added: “My personal view on it is that the British government do want to get a deal at some point but I do think that the way in which they’re approaching these negotiations is a strange way to show it.

“Do the British government want a partnership that can settle these issues in a way that deals with the pragmatic problems and concerns that have been expressed in Northern Ireland, or do they want to continue to drag this issue out with all of the risks that comes with that?

“I don’t think it will be the case forever, that the EU will be in compromise and solutions mode.”

Mr Coveney also said he didn’t believe there was an appetite in the EU to re-write an international agreement.

He continued: “Who knows where this goes if we move into the new year and we’re still not making any progress and the asks coming from the British side continue to be an ask to rewrite an international agreement, as opposed to look for flexibilities within it.”

One Brussels source added: “As Maros Sefcovic has said, giving the people of Northern Ireland a solution to the protocol by Christmas would be the perfect gift.

“We are willing to engage with the UK but of course they [the negotiations] cannot be endless”.

It comes as Prime Minister Boris Johnson said the problems with the protocol need to be flushed out “pretty fast”.

The Prime Minister also claimed the way the post-Brexit agreement is being interpreted is “not coherent” with the principles of the Good Friday Agreement.

The Northern Ireland Protocol was agreed by the UK and EU as a way to sidestep the creation of a border on the island of Ireland.

It achieved that by shifting regulatory and customs checks and processes to the Irish Sea.

The arrangements have created new economic barriers on goods moving from Great Britain to Northern Ireland, while unionists and loyalists have objected to what they perceive as a weakening of the Union.