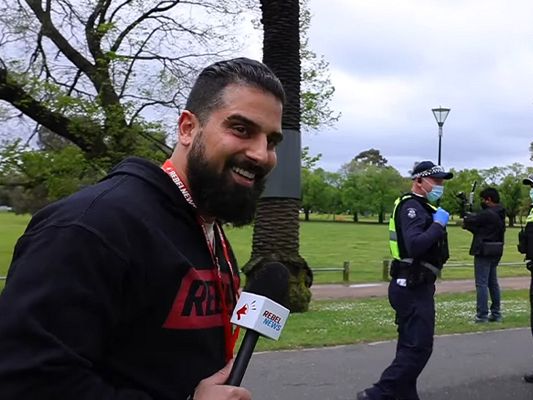 The anti-lockdown movement has given a platform to “citizen journalists” seeking fame and determined to incite hate and disturb the peace, writes Tom Tanuki.

I SPOKE TO a Triple R show, Spin Cycle, the other week. The subject was “citizen journalists”, which was topical after anti-union, anti-lockdown rallies had just occurred. People were beginning to understand how at least one “citizen journalist” was a driving factor behind the protests’ growth. As I began to jot down notes, I realised that my experiences with this particular brand of shape-shifting pseudo-media figure could fill a book. I’ve been dealing with parasites using the title for years.

At an anti-racist rally in 2018, a man with a floppy old leather jacket and servo sunnies was shuffling around filming Lefties’ faces. I detected the aroma of “citizen journalist” on him. It’s the scent of a loner with a crumbling social life, a YouTube watch history of too many Ben Shapiro videos and pervasive looming guilt over certain skeletons in his closet. They are always the same kind of man. I have a pronounced sensitivity for detecting this aroma; by 2018 I was already a trained “citizen journalist” attack beagle.

So I did what I’ve been doing best for a long time — I started being rude and weird to him. I put my thumb over his big dumb iPad camera for a bit. (That trick works better if they have a really good camera; act like you’re going to lick the lens to “clean” it and they run for the hills.) I stood next to him, in front of him, around him, circling him like a weirdo. I said odd stuff to him. Eventually, he left, sweating.

I found him online and, of course, he’d made an interchangeable “citizen journalist” page called No Safe Spaces. Ben Shapiro over-consumption — check. Then a mate messaged me to say they’d dated years ago and he was abusive to her. Skeletons in the closet — check. These blokes come off a production line.

If you don’t nip these men in the bud early, they go on to become much worse “citizen journalists”. The term has always meant something different but since 2017 or so in the activist context, it has usually denoted a man who films rallies. And in line with the usual culture warfare popularised in America by the likes of Rebel News, the content is generally created at Lefties’ expense.

Avi Yemini began attending rallies for content in late 2017. He’d film attendees, ask them gotcha-style questions and curate the footage to air what made him look good. He has been so dogged in his pursuit of subscribers that he’s become Australia’s premiere “citizen journalist” and picked up Rebel News’ backing.

His content is entertainment for a heavily partisan audience who are hyper-fixated on a caricature of “the Left”. We’re talking the “Schrödinger’s Leftist” figure like in the old meme: simultaneously a terrifying elitist force of societal decay and a weeping blue-haired university student. Avi Yemini doesn’t actually care about politics and this helps him to fill his market niche because he can, and does, just say anything that’s popular. Ethics don’t get in the way of his grind. It isn’t clever stuff; you just have to be there and do it, repeatedly.

I helped create the fun, non-violent anti-fascist strategy/group Yelling At Racist Dogs (Y.A.R.D.) in 2017. This was at a time when Reclaim Australia’s anti-Islam, nationalist rallies were waning; rock star alt-Right figures like Milo Yiannopoulos and Lauren Southern were popping up in its stead, doing international tours, peddling best-selling books and shifting the arena of populist nationalism from the rally to the event hall.

The alt-Right machine was fully monetised and Australia was a strong paying market for it. Y.A.R.D. was thoughtful in its aims and intent but dumb in its delivery. We’d head out and bellow dumb abuse at ticket-wielding racists as they queued to go see Milo, for example. Usually, the person being yelled at on camera looks like a sitting duck. We’d film it all and curate it into fun yell compilations.

Y.A.R.D. altered the career of “citizen journalist” Avi Yemini in two ways. Firstly, he stopped livestreaming immediately once he realised our shouted contributions weren’t exactly helping his streams. Secondly, and this came later, we formed a network. People across different progressive activist movements came to expect to see Avi pop up at their rallies to undermine them because that was Avi’s income stream. They began to message us to find out what to say to interrupt him.

Eventually, Avi began encountering an overwhelming new wave of interest in his having pled guilty to domestic violence, for example. Because he didn’t want to include that stuff in his heavily curated videos, we were making his grind a lot harder.

What was all this in aid of? For one, I don’t accept the idea that we should roll over while opportunist parasites make real progressive activist movements look like idiots for money. Take, for example, climate justice activists rallying as the world begins to burn. Their activist fight is more important to defend than Avi Yemini’s income stream earned at their expense.

Furthermore, his videos led to specific threats to leftists. Avi released a series of videos mocking and harassing one particular activist he continued to chase down at Left rallies in 2019. Avi once visited the house of a Jewish professor who criticised him, publishing a video he filmed outside, basically doxing that man. This was Avi’s brand of “citizen journalism” when allowed to flourish uninterrupted. It was safer for everyone if we continued interrupting it.

By prioritising non-violent confrontation with the likes of these “citizen journalists”, we also provided a productive outlet for activists’ frustrations. To see what happens when that outlet doesn’t exist, look at Andy Ngo, a U.S. “citizen journalist” figure. Ngo was targeted and chased down at a Portland anti-fascist rally in 2019; activists saw a man who’d targeted and doxed many among their number, standing among them filming. They flipped. One of them hit him. He was photographed bleeding. For that, Andy received a GoFundMe of over $100,000 and a kickstart to a career in prestige journalism.

This was not an incident you’d imagine people would aim to replicate, but perhaps you don’t know “citizen journalists” so well. The worst that’s happened to Avi at a rally is having a bottle of water poured on him but he described even that as a “violent assault”, released multiple videos on it and begged hard for subscribers and support as a result. So our aim with “citizen journalists” was always to deny them a repeat Andy Ngo outcome. Allow a vent for understandable frustrations at them and in so doing it from turning physical. Avi should thank us, really, for having kept him safe.

Victoria Police (VicPol) began designating certain figures as inflammatory and provocative to rally tensions in 2019. This was not a broad designation — it only seemed to target a small handful of figures including Avi Yemini and convicted racist Neil Erikson. Suddenly, these pests were handled in a unique way, wherein VicPol would warn them to leave immediately or risk being charged with “breach of the peace”. If they didn’t comply, VicPol would cuff them and escort them a few blocks away.

VicPol were trying to reduce the opportunities for tensions at rallies. That approach, combined with Y.A.R.D.’s interventions, were making Avi’s typical content grind a lot harder. At this time, consequently, Avi began to posture as a proper journalist, carrying a fake press pass around with him and various papers to produce for VicPol. His focus became on promoting legal action against VicPol to get them to change their strategy. It was clear that this was hitting him where it hurt.

We’ve not stopped Avi’s success. It’s not possible. The market is too big for his entertainment and anyway, someone willing to sacrifice their entire personal life for fame is eventually going to get some. But we interfered heavily with his business angle which is a danger to real activist movements and I’m proud of our work.

This history shows that “citizen journalism” is constantly shifting and changing and fundamentally driven by self-interest. It also demonstrates why the promise of legitimacy that comes with “journalist” as a title is so alluring for alt-Right pests trying to escape scrutiny (or arrest). But it feels like a lifetime ago now. It pre-dates the coronavirus pandemic and the anti-lockdown movement has provided an incredible shot in the arm to not just Avi but a range of other would-be “citizen journalists”.

Join me next week as I cover recent developments through anti-lockdown activism, look at a new figure in “citizen journalism” and discuss how I think they should actually be described.