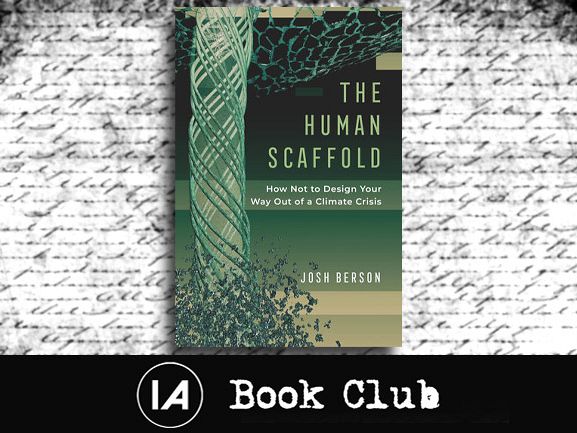 This short book, The Human Scaffold: How Not to Design Your Way Out of a Climate Crisis appears to be written for a small audience of cognoscenti.

The author, Dr Josh Berson, describes it as a follow-up to his earlier work, The Meat Question.

The book is as much about the author as it is about his coined subject, the human scaffold. This term refers to a vision or model of humans as being allegorical epiphytes in every habitat or niche of our planet, but in the way that certain plants rely on others to provide a scaffolding that supports them without their becoming or being parasitic.

It emerges gradually that “stuff” is the epitome of what our species needs to reject and discard in a powerful wave of personal and communal asceticism.

The book and style are paradoxical in that the author repeatedly introduces more digressions than this reader could tolerate in simply getting to his point of explication. One example occurs in the statement of the purpose and context of the book, where he constantly diverts the reader away from the simple quest for ‘what’s this all about?’

But it happens over and over in this book.

Moreover, given its subtitle ‘How Not to Design Your Way out of a Climate Crisis’, I had expectations that the author might formulate the non-preferred path as a structure to guide the formulation of a new path and tools, for facing and managing the existential crisis that is global warming today. Not so.

At the outset the author, in announcing his model of ascetic, epiphytic living – having included as a frontispiece a quote (from Tamarisk Row, by Gerald Murnane) depicting an almost impactless or footprint-free model of Aboriginal inhabitation of pre-historic Australia – Berson shocked me by his first-person narrative in itself.

But I was more so taken aback by his elaboration of six or seven far-flung places across the world, a travelogue almost, of his recent travels and dwellings, suggesting that he paid little heed to the “footprint-free”, epiphytic and ascetic model which his Murnane quote seemed to champion.

My main concern and responsibility then became to faithfully ascertain how much this book provides a blueprint for dealing with the climate crisis — concern, because I found the book so hard to read, yet climate change is so topical, and responsibility because I could advise others of its suitability as a “how to” or “how not to” guide.

The book is essentially the patchy writings of someone who finally, and it appears begrudgingly, admits that he is a modern-day anthropologist.

For my part, having been unable to “wring out” too much from my own reading of the book, I searched and found instances online of Dr Berson himself describing and explaining some of its concepts.

The Human Scaffold: How Not to Design Your Way Out of a Climate Crisis is available for $29.95 (paperback) RRP.