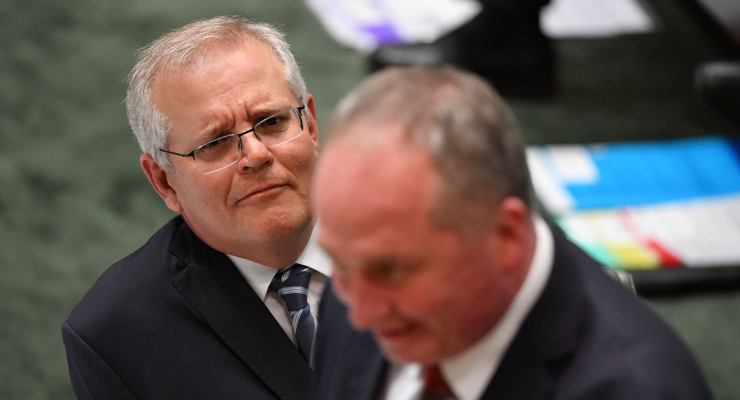 Today Prime Minister Scott Morrison will ask cabinet to endorse a target of net zero by 2050, the SMH reports, after the Nationals gave in-principle support on Sunday. It didn’t come cheap, Guardian Australia understands — the Nats will reportedly get a transition package (thought to cost tens of billions, AFR reckons) and an extra cabinet position in return. It could be filled by recently demoted Resources Minister Keith Pitt, who lost his gig when Barnaby Joyce was reinstalled as leader of the Nats, The Conversation’s Michelle Grattan says. But Joyce dodged questions confirming anything, as ABC reports.

Incredibly, nine of the 21 Nationals MPs voted against the net zero target in the two-hour party room meeting yesterday. George Christensen — who wore a t-shirt to the meeting that said “support coal” — is reportedly thinking of joining the crossbench in protest of the target, a threat which is nothing new. Joyce wouldn’t reveal which way he voted, but his deputy David Littleproud seemed keener, saying the decision meant “growing regional jobs” and “facing up to our international commitments”. We should learn more about the actual plan today too — the SMH suggests there’ll be an electric vehicle push, a little over two years after Morrison famously accused Labor of a “war on the weekend” over their electric vehicle policy, as ABC reported at the time. And let’s not forget Minister for Energy and Emissions Reduction Angus Taylor’s 2019 attempt at a meme.

Lyndell Turbane has made an urgent plea to the Queensland government to block Adani from clearing 3000 cubic metres of land, the Brisbane Times reports. Turbane, a traditional owner of the Wangan and Jagalingou peoples, says the mining giant’s plan to move the land to another culturally important site puts it at risk of contamination as well. The paper says they’ve seen surveys proving the 3000 cubic metres contains the largest amount of Indigenous artefacts found at the mine to date — the area’s stone was once used to create flake tools.

It comes just weeks after Queensland police refused to remove traditional owners at Adani’s coal mine site, Guardian Australia reported. Wangan and Jagalingou peoples have occupied the site for six weeks conducting important ceremonies, and the cops told the group they acknowledged and respected their cultural rights to do so under provisions of the 2019 Queensland Human Rights Act. The Conversation continues that police also issued a “statement of regret” about removing the group months earlier. It was the first time a state agency has apologised to an Indigenous person since the enactment of the human rights act, The Guardian’s Ben Smee says.

POWER AND THE PASSION

The guy who led the charge in Australia’s economic recovery from COVID has been charged with breaching COVID restrictions, ABC reports. Former head of the National COVID-19 Commission Advisory Board Neville Power didn’t fill in WA’s border declaration before flying in via helicopter earlier this month. Power and his companion were each charged with three counts and have to front court mid-November.

Border woes continue as Western Australia Cricket boss Christina Matthews has said Perth may not host the Big Bash League (BBL) this summer, The New Daily reports. Some suggest the BBL could take place on the east coast or in Tasmania, but the worst case scenario, Matthews told 6PR, would be “travelling the entire tour” — and besides, the Daily adds, Tasmania is set to reopen to NSW and Victoria on December 15 while Queensland opens December 17, as 9 News says — over a week after the BBL is supposed to begin.

But Premier Mark McGowan might have bigger things on his mind — he rushed home after a wedding on Saturday morning following a reported incident at his Rockingham home, WA Today reports. McGowan said his home address and mobile number had been leaked by anti-vaxxers after the 75% workforce vaccine mandate was announced, as ABC reports.

It was an average night at a tiny honky tonk in North Carolina. It was warm enough that a couple of groups milled about the Thirsty Beaver’s front patio, some downing drinks before a Rolling Stones concert later that night. Tickets weren’t cheap — upwards of $400 apiece, but price isn’t important to many in the iconic rock band’s sprawling fan base. An old bloke leaned on the patio’s bench alone, sipping his beer, but no one paid him much attention.

Folks, I kid you not — it was Mick Jagger. Jagger, 78, posted a photograph of the scene to his Twitter, showing the groups on either side turned away from him, apparently unaware of their proximity to a rock legend. The Thirsty Beaver is actually pretty well-known in its own right for its staunch refusal to sell to developers — surrounding the boxy bar on three sides is a sprawling five-storey apartment building. “Nobody really mentioned that anybody famous had been here, so I don’t think anyone noticed — but this morning, my phone did,” the bar’s co-owner Brian Wilson, who arrived later on, told CNN. He said some of the people in the photo had pretty good tickets to the show, “but if they’d only turned around they would have been as close as they are ever gonna get”.

Really brings new meaning to the phrase “the honky tonk blues”, doesn’t it? Have a mindful Monday, folks.

They are not there with us at this stage; unfortunately, they are getting their education from Chernobyl and The Simpsons.

The Nationals deputy leader confirmed nuclear would not be part of our clean energy mix because you have to “educate before you legislate”, continuing that Australians apparently know little more about nuclear than what they gleaned from a kids TV show and a HBO miniseries. Perhaps take foot out of mouth and then speak next time.

“These recommended changes attempt to sand the edges off the harsher aspects of Wilson’s Wikipedia entry, but use the website’s rules to justify changes. The user points to Crikey, Huffington Post, Junkee and Michael West Media — ‘the publication has an agenda covering the rising power of corporations over democracy’, TimWilsonMP wrote — as being inappropriate for Wikipedia citations.

“Facts such as Wilson’s opposition to plain cigarette packaging, opposition to a carbon price, and being rebuked by Speaker Tony Smith for his antics around the franking credits inquiry, were removed, although some of those changes were later reverted.”

From hero to net zero: ICAC blasts the sheen off Gladys, her restoration in grave doubt

“Outside ICAC, speculation is running rife. If Berejiklian is found to have breached public trust, what happens next? … As Berejiklian was a NSW MP for 18 years, and premier for four, she is entitled to a substantial pension and generous superannuation benefits.

“But section 19AA the Parliamentary Contributory Superannuation Act 1971 states that a parliamentarian’s eligibility for a pension arises after having been in office for seven years, ‘except where the member or former member is charged with or convicted of a serious offence’. This is defined as either an offence punishable by a term of five years or more, or ‘an infamous crime’.”

Australia is the land of shonks, spivs and charlatans — and that’s just Parliament

“Curbing donations, subjecting interactions between public officials and private interests to much greater transparency and removing most of the discretion that politicians have in relation to funding — whether for their own office purposes or the use of grants and programs — is the only way to reduce these incentives. A federal integrity body worthy of the name is still necessary beyond that.

“We have a political system that far too heavily relies on the goodwill and good faith of those within it. When malign actors come along — like the Morrison government, or Victorian Labor — the system too readily bends to misconduct and corruption. The answer is a more rigorous system, not hoping some better participants show up.”

Their jobs made them get vaccinated. They refused. (The New York Times)

Endemic COVID-19 has arrived in Portugal. This is what it looks like. (The Wall Street Journal)

Climate change: Why Australia refuses to give up coal (BBC)

We are filmmakers who work with firearms. This is what is important in on-set safety — Christopher Gist, Sarah Mayberry (The Conversation): “In a horrendous accident, a cinematographer has died and a director has been injured after Alec Baldwin fired a prop gun while filming in New Mexico … We recently finished shooting Darklands, a psychological thriller staring Nadine Garner about a policewoman who fails to stop a shooting and is then pursued by a journalist determined to use the policewoman’s story to resurrect her own flagging writing career.

“We used real weapons, but we only used blanks in one scene. The night we fired the blanks was a very controlled situation, working with a very experienced crew … In 1982, three actors — two of them children — were killed on the set of Twilight Zone, when special effects explosions caused a helicopter to crash. Their deaths will echo through film sets forever. In 1984, the actor Jon-Erik Hexums put a gun filled with blanks to his head, and, joking about delays to filming, he pulled the trigger. The force of the wadding was enough to fatally injure him. Instead of using a bullet, blanks use wads of paper, plastic, felt or cotton — this wadding ensures you get a certain level of flame out of the gun.”

Is it inherently antisemitic to criticise Israel? It may depend on who you ask — Michael Vistonay (Guardian Australia): “[Jews] also feel a sense of unfairness in this criticism, claiming biases such as over-reporting of the Israeli-Palestinian conflict compared to others, coverage oversimplified into aggressor versus victim, a lack of interest in transgressions on the Palestinian side, and the selective outrage of advocacy and human rights groups and supra-national global bodies. Where are the calls, they say, to boycott China over the Uyghurs, Myanmar over the Rohingya, Qatar over its foreign workers, Saudi Arabia over its repression of dissidents?

“In short, there is a grievance that Israel has been singled out unfairly in a world full of messy injustice. While there is truth to this, there remains the inescapable fact that Israel has held Palestinians and their land under occupation for more than 50 years, and that successive governments continue to facilitate Jewish settlements and enact laws that reduce the Arabic language and Palestinian history to second class status. Its critics rightly argue the Israeli government should be held accountable for its policies and decisions.”