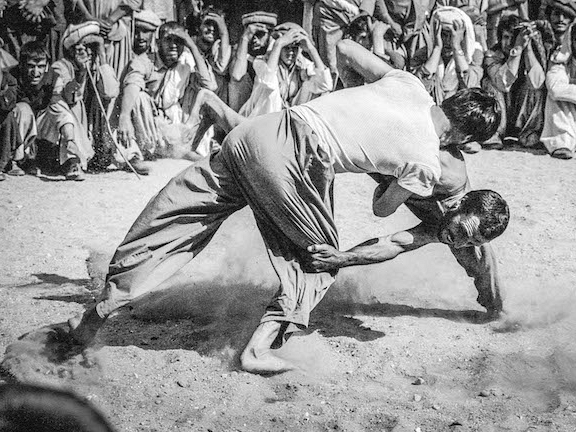 Prints in Afghanistan, a photography campaign for AfghanAid created by Thomas Parrish and Mark Parrish preserves a memory of the country, pre-Taliban, when its people were full of pride and prosperity.

The country I came to know a little is so different to that which is reported: life in Afghanistan has changed immeasurably in the past four decades, conditions have worsened and life expectancy has fallen. Yet the spirit of the people and their pride will have remained. I am grateful to have experienced a small part of the country and feel that these photographs show some of that. I hope they remind us of the innocence of the Afghan people — as welcoming and peaceful, first, in a country torn by war and destruction, second.
~ Mark Parrish

I recently teamed up with my father Mark Parrish to create Prints for Afghanistan, a fundraising photography campaign for AfghanAid — a UK/Kabul based charity that provides emergency support such as food parcels, hygiene kits, kitchen packs and emergency shelter for families who have lost their homes, and financial support for families whose lives have been uprooted by the conflict.

In 1977, Mark travelled through Afghanistan on a school expedition, taking black and white images on Ilford film using his father’s Canon Canonet and his own Olympus OM1.

During his journey from Kabul to the peaks of the Hindu Kush, he captured some of the period’s most iconic images. Taken before the unrest of Soviet rule and the resultant Mujahadeen rebellion (which followed mere months after the images were taken), Mark’s pictures depict a country at ease with its traditions, its neighbours and its place in the world.

Considering the Taliban’s recent takeover of Afghanistan after Western forces exited the country and shaken by the horrifying scenes of displacement and desperation that have resulted, Mark and I decided to put these iconic images to use.

I visited Afghanistan in 1977 on a school expedition. I spent five weeks in the country, from Kabul to the Hindu Kush and back overland to England through Kandahar and Herat. These names are in the media regularly now and we associate them with conflict, repression, violence and the restriction of human rights.

But in 1977 Afghanistan was a very different country: friendly, open and welcoming with a culture that had surpassed even India in its glory, juxtaposed with the strategic development of a new society, fuelled by Soviet and American investment reflecting the country’s significance as a centre of trade and invasion routes between central, southern and western Asia. A country where women wore trousers and skirts as well as traditional burkhas and whose government had given them the right to vote before American women.

The country I came to know a little is so different to that which is reported: life in Afghanistan has changed immeasurably in the past four decades, conditions have worsened and life expectancy has fallen. Yet the spirit of the people and their pride will have remained. I am grateful to have experienced a small part of the country and hope that these photographs show some of that.

The alleyways of Kabul were an eye-opener for a teenager from England: shops, workshops, stalls and warehouses were crammed together in earth-brown buildings and sprawling markets were piled high with wares of every kind.

Trades were clustered in the same area: this tailor was in “Sewing Street”, where you could get any clothes repaired or made from a row of similar establishments; small open-fronted huts with a sewing machine, cloth optional (you could buy it elsewhere) and more Afghans than seemed capable of squeezing into the space. It made it easy for the customer and competitive for the tradesmen but didn’t seem to affect their cheerful demeanour and the ever-present “hey Mister, come to my shop…” followed by an offer of tea.

We headed northeast from Kabul into the provinces of Kunar and then Nuristan, the “land of light”, previously known as Kafiristan. The foothills of the Hindu Kush appeared in the distance and the tarmacked road was replaced by what was generously described as a “stabilised gravel surface”, producing a bumpy ride.

So bumpy that our truck battery short-circuited and caught fire, causing an impromptu stop. Sitting beside the road while repairing the damage and having a cup of tea, we were regularly passed by these ubiquitous Toyota Land Cruisers – the workhorses of the region – covering us in dust while their passengers clung on like limpets, making maximum use of all space.

We arrived in Barge Matal, the village at the end of the road into Nuristan, on 17 July, the day of celebrations marking the overthrow of the Afghan monarchy in 1973. Our ex-Army Bedford truck was apparently the largest vehicle to ever make it up the road, which explained our average speed of five miles an hour and that we’d destroyed three of our four spare tyres.

We were surrounded by crowds of Nuristanis who had travelled to the village for a day of competition and festivities: our arrival added extra interest and excitement to the noise, flag-waving, music and smells of roasting food. These children were watching the celebrations from a good vantage point as they could keep an eye on us and the sporting events.

Prints for Afghanistan aims to not only raise funds to support AfghanAid but also to preserve a memory of Afghanistan unseen in today’s conversations — a memory of a people full of pride and prosperity, uninhibited by war, as it was before.

Thomas Parrish is a British/Australian photojournalist who is driven by a passion for exposing and championing environmental and humanitarian issues that exist in today’s societies, all over the world.

Mark Parrish is a British/Australian photographer who discovered his love of imagery during his school days in the era of film and fixer. He and his cameras have travelled widely, from Afghanistan to India, China to Egypt, Sudan, Pakistan, the Antarctic and beyond.

Click here to see more from Thomas Parrish and learn more about Prints for Afghanistan.