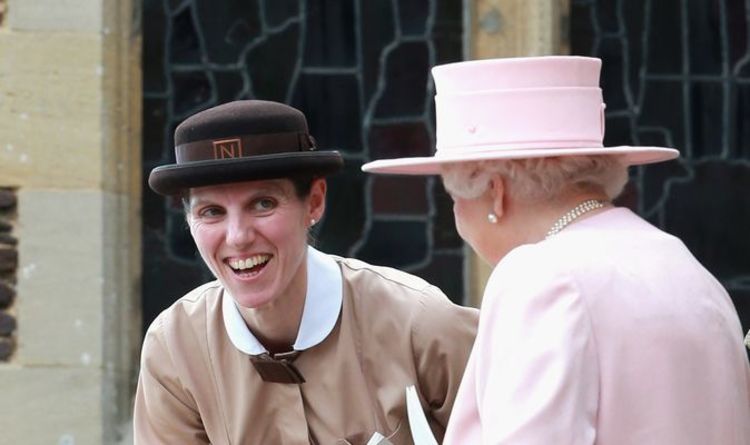 Prince William and Kate, Duchess of Cambridge both 39 were spotted heading off on holiday with Prince George, eight, Princess Charlotte, six, and Prince Louis, three, earlier this week during the children’s half-term break. The family’s Norland nanny, Maria Teresa Turrion Borrallo was spotted with them at the airport.

The royals were photographed with their luggage outside the Windsor Suite at Heathrow airport on Thursday afternoon.

While their holiday destination has not been confirmed, the trip abroad is only the second time the family have left the UK since the start of the pandemic.

George and Charlotte are pupils at Thomas;’s Battersea and their half term runs from October 21 to October 29.

Ms Borrallo has worked for the Cambridges since 2014 after being recruited from the prestigious Norland College in Bath.

She was pictured alongside the royals at the airport wearing a lightweight brown skirt with a dark red top, flat black shoes and a blue bag and it is not the first time she has been included in family events.

At the wedding of Princess Eugenie and Jack Brooksbank, Ms Borrallo ensured the young bridesmaids and pageboys were on their best behaviour throughout the entirety of the wedding.

Ms Borrallo has been a trusted member of the royal staff since her arrival as nanny.

Before becoming the nanny for the Duke and Duchess of Cambridge Ms Borrallo discreetly worked for some other high-profile names.

Plenty of politicians from all across the world will be in attendance at the upcoming event.

US President Joe Biden and his climate special envoy John Kerry, French President Emmanuel Macron, Indian Prime Minister Narendra Modi and Brazilian President Jair Bolsonaro are just some of the names on the list to attend the summit.

Queen Elizabeth II was captured on camera speaking about the upcoming summit.

Her Majesty said: “Extraordinary, isn’t it. I’ve been hearing all about Cop… still don’t know who is coming. No idea.

“We only know about people who are not coming…”